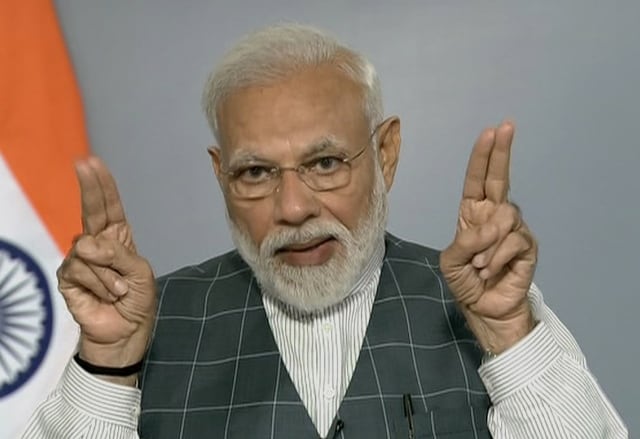 In a major defence achievement, India on Wednesday successfully tested an anti-satellite missile by shooting down its own decommissioned satellite that was on a ‘Low Earth Orbit’ at a height of 300 KM from the earth’s surface, entering into an elite club of four nations to have such a capability.

Prime Minister Modi also assured the international community that this test does not violate any international treaties or law and that India remains committed against the arms race in space.

India has now entered the elite international club of four countries having such a capability.

“India has successfully registered its name as a space power. Till now three countries of the world- America, Russia and China had this feat. India is the fourth country to have achieved this feat. There could be a no bigger moment of pride. A short while ago our scientists have shot-down a live satellite in low earth orbit (LEO) in space through an anti-satellite (A-SAT) missile,” Prime Minister Modi said.

Giving details of the test of `Mission Shakti (strength)’, Prime Minister Modi said that in the LEO, the satellite was a pre-decided aim. “It was successfully shot down in just three minutes and the operation culminated immediately. The feat required high technical expertise and capability. The scientists have achieved the entire decided target. This valour was achieved through indigenously built anti-satellite missile.”

Outlining the space prowess of India, the Prime Minister added: “We have different satellites which are contributing in various sectors including weather forecast, education, medical, navigation etc. Our satellites are helping all including farmers, fisherman, students. In the world, the significance of space and satellite is going to increase and they may become indispensable to life.”

Prime Minister Modi mentioned that today’s test was not in any way violation of any international treaty or law. “Today’s A-SAT missile has given new strength to security and vision of the country. We want to assure the world that our new capability is not against any country but is the defensive initiative of the fast-moving India. India has always been against the arms race in space and this test hasn’t changed that. This successful violates no international treaties or law,” he said.

“We are using the modern technique for the welfare and security of our 130 crore citizen. For peace and secure atmosphere, a strong India is significant. India’s work in the space category is aimed at India’s security, economic development and technological advancement. Today’s `Mission Shakti’ is an important step in achieving this dream. Today’s success should be seen as our step forward towards a secure, prosperous and peaceful country,” Prime Minister emphasised.

“It is important that we move forward and ready ourselves for future challenges. For positive changes, we have to accept modern techniques. Our target is that all Indian must face future challenges with confidence and feel safe. I foresee an India which can think two steps ahead of the time and can also have the courage to move in that direction”, Prime Minister added.

Prime Minister Modi also congratulated the scientist and technicians of Defence Research and Development Organisation (DRDO) for achieving this feat. “We are proud of our scientists. They have further enhanced the stature of the country. I congratulate all countrymen for today’s achievement,” he said. (ANI)