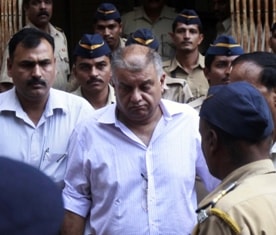 In a new twist in the Sheena Bora murder case, her mother and one of the prime accused Indrani Mukerjea here on Wednesday said her husband Peter Mukerjea and former driver Shyamvar Rai may have conspired to kidnap Sheena and later destroy the evidence.

Confirming the development, her lawyer Gunjan Mangla told IANS that Indrani had written the letter independently, and contrary to speculation, she has not levelled “any allegations or blamed anybody” in the matter. In a two-page hand-written letter to the Special CBI Court Judge penned on Wednesday, Indrani has said that Peter and Rai may have made her “untraceable” and later, along with other could have manipulated circumstance (sic) to frame her in the murder of Sheena Bora. “I do believe that (the above mentioned) along with others may have manipulated circumstance to frame me and have influenced witnesses, situations and information to lead to my arrest on 25-8-2015, for a heinous crime that they may have committed, aided and abetted,” Indrani’s letter stated. She urged that if the Special Court could obtain the call records of Peter Mukerjea’s mobile number, it could help ascertain better if he and others were involved in Sheena Bora’s disappearance and it would throw more light on their role in framing her (Indrani). Indrani urged the Special Judge to help provide the call records of Peter Mukerjea’s mobile number for entire 2012 and 2015 (January-December). She added that this could help provide justice to Sheena “who may have lost her life on account of greed, betrayal, jealousy, lust and ill-will of persons whom she dearly loved and trusted.”

Murder most foul, but will it out?

In the sensational Sheena Bora murder case, Indrani, her former husband Sanjeev Khanna and ex-driver Rai were arrested in August 2015, Peter Mukerjea was nabbed in November that year.

Sheena Bora was killed on April 24, 2012 and her body was disposed off in the forests near Gagode village in Raigad district, around 100 km south of Mumbai. The murder was discovered only around August 2015 when Rai was arrested in an arms possession case and later spilled the details, leading to the arrest of Indrani Mukerjea, her husband and former media tycoon Peter Mukerjea, her former husband Sanjeev Khanna, by the Mumbai Police. Later, in November that year, the case was transferred to the Central Bureau Of Investigation (CBI). The Mukerjea couple and Khanna remain in custody since nearly two years now. In June 2016, Rai turned an approver in the case and was given a pardon by the court in return for evidence in the matter.