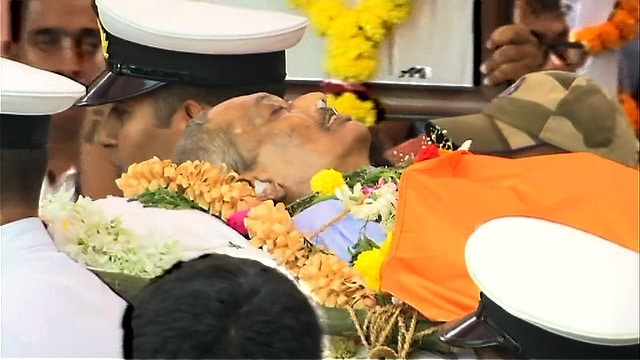 Thousands of mourners on Monday gave a teary tribute to Goa’s four-time chief minister Manohar Parrikar as his body was cremated with full state honours. The final rites were performed with Vedic Hindu rituals as Parrikar’s son lit the pyre.

The final journey of Goa’s ‘son of the soil’ begun from Kala Academy in Panjim. A teeming column of mourners followed on foot and vehicles.

The news of Parrikar’s demise was shared by President Ram Nath Kovind on Sunday evening. “Extremely sorry to hear of the passing of Shri Manohar Parrikar, Chief Minister of Goa after an illness borne with fortitude and dignity. An epitome of integrity and dedication in public life, his service to the people of Goa and of India will not be forgotten,” he said.

While Congress president Rahul Gandhi observed a two-minute silence at a public rally to pay homage to Parrikar, Congress-led opposition leader in Goa assembly Chandrakant Kavlekar called him a “leader of great abilities whose loss is certainly irreversible and incalculable.”

Embodying ‘work is worship,’ Parrikar efficiently led from the front till his last breath. Exactly 10 days before his death, he was last pictured on March 7, in his trademark attire of a simple shirt and trouser, unveiling the plaque of foundation stone for a sewerage scheme.

His political journey of about 28 years took him from one high office to other, only culminating in the position that he often referred as most close to his heart.

In October 2000, Parrikar had become the Chief Minister of the state for the first time. He was the first IIT graduate politician to take reins of the coastal state.

His love for Goa was so earnest that even after he moved to New Delhi to take on the post of country’s defence minister, Parrikar left no chance to visit his hometown frequently.

Hence it wasn’t much of surprise that after the BJP failed to get a complete majority after the 2016 state assembly polls, the allies clearly stated their faith in Parrikar.

Even for the brief period of little less than three years that he served as the Defence Minister, Parrikar earned friends and admirers at the national and global level. His untimely death was also condoled by the United States and Russia.

Parrikar not only transformed Goa’s infrastructure but also oversaw the first surgical strikes of 2014 as the defence minister.

Born in a middle-class Gaud Saraswat Brahmin family, his trademark image of wearing a simple shirt and trouser and waiting patiently in queues at different public places will remain itched for long in public memories.