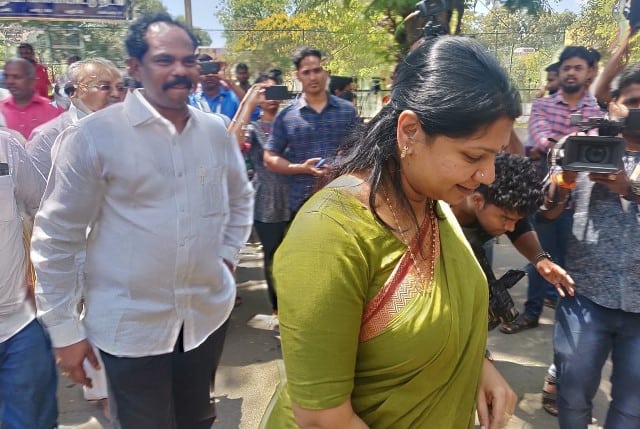 DMK Thuthukudi candidate Kanimozhi going to meet MDMK Chief Vaiko in his Anna Nagar residence in Chennai, Tamil Nadu on Monday. ]]>
Desiya Murpokku Dravida Kazhagam (DMDK) on Sunday joined the BJP-AIADMK-PMK alliance in Tamil Nadu for the ensuing Lok Sabha elections. Four Lok Sabha seats have been given to the DMDK from the alliance.

On February 19, the AIADMK formally joined the NDA. Under the joint agreement, the BJP will contest five out of 40 Lok Sabha seats in Tamil Nadu and Puducherry.

The party will also support the AIADMK in the by-polls for 21 Assembly constituencies in Tamil Nadu.

Another regional party in the fray, the Pattali Makkal Katchi (PMK), led by S Ramadoss, will support the BJP-AIADMK front in the state in the General elections.

The party, which has a strong vote base in northern Tamil Nadu, especially among the OBC Vanniyar community, will contest on six Lok Sabha seats, and will be given one Rajya Sabha seat. 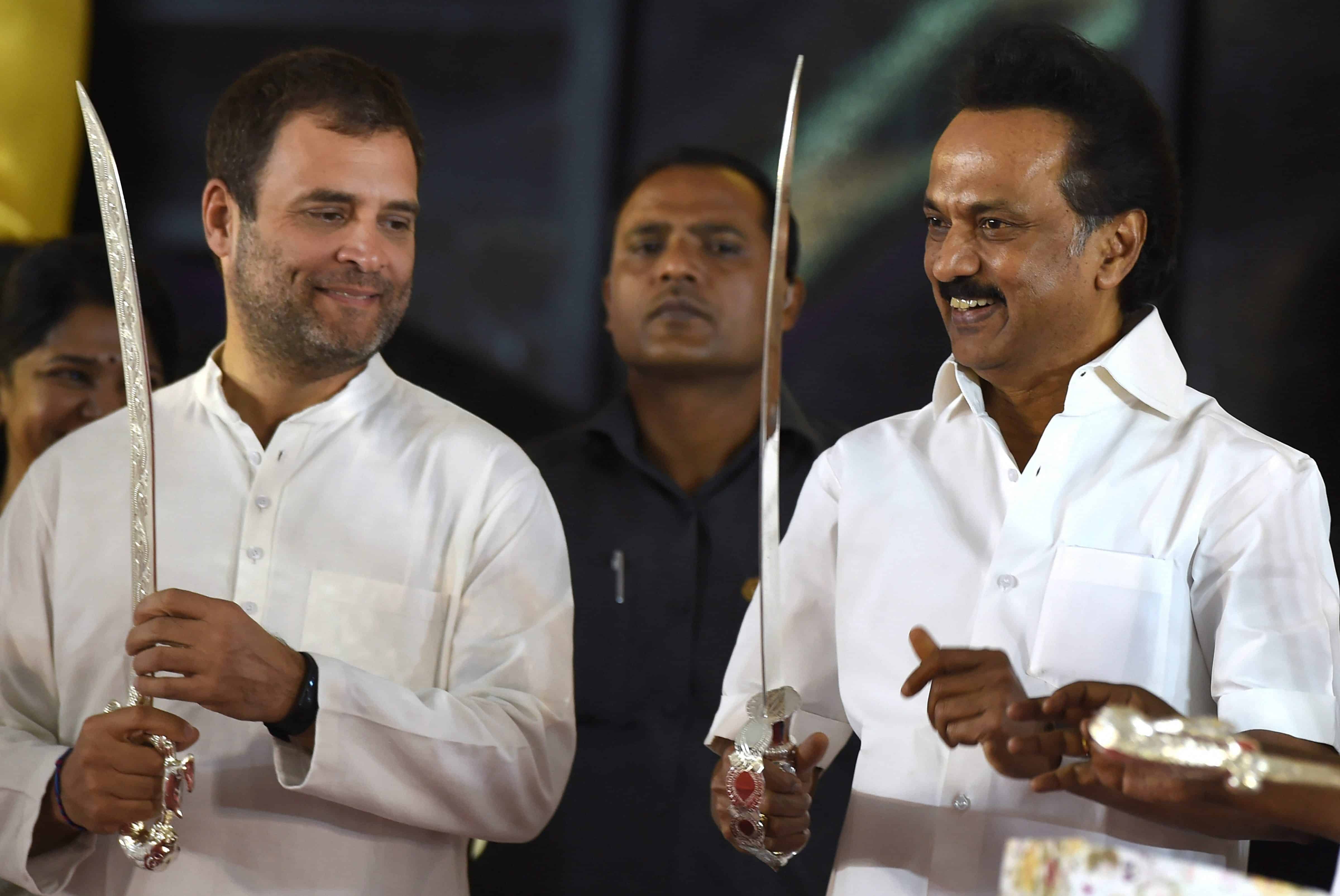 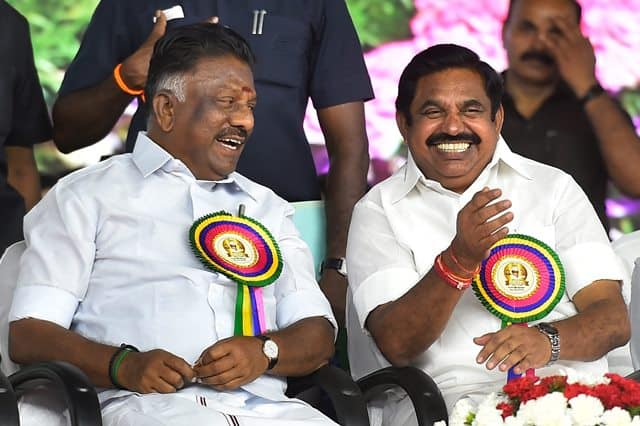 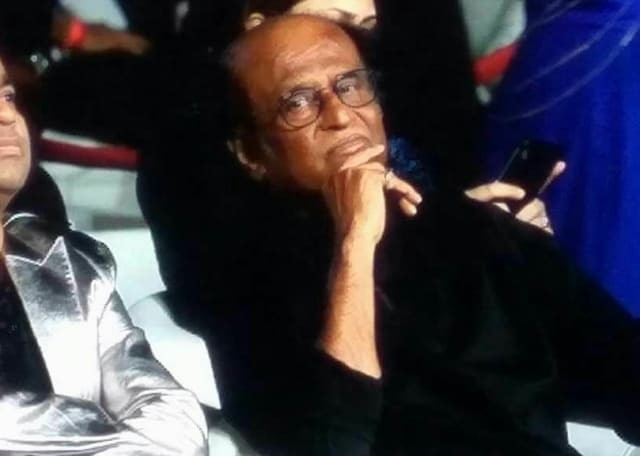 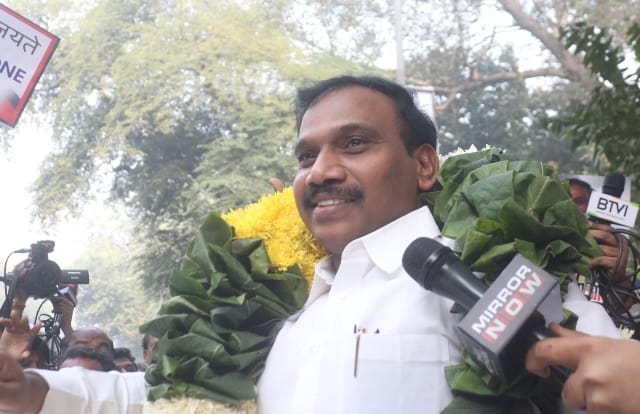 The relationship between Congress and DMK is strong. There will not be any change in that. “There will be realignment in the political scenario in Tamil Nadu following the verdict. Political parties may now gravitate towards the DMK without any hesitation as the shadow of 2G case is no more there on the party,” Professor of Political Science at the University of Madras Ramu Manivannan told IANS. “It is ironical that DMK lost elections due to the alleged scam in 2G spectrum allocation. Now DMK will claim moral and political victory,” Manivannan added.

There is also a view that DMK will be wooed by the BJP with an eye on the 2019 Lok Sabha polls. There could be a race between the Congress and BJP to align with DMK. “The relationship between Congress and DMK is strong. There will not be any change in that,” S. Thirunavukkarasar, Tamil Nadu Congress chief, told IANS. “Other like-minded parties wanting to join us are welcome,” Thirunavukkarasar added. Asked whether the two Communist parties would come forward and join the Congress-DMK alliance with the shadow of 2G scandal now gone, he said it could happen as there should be a united secular front to oppose the BJP. Currently the DMK has Congress and Indian Union Muslim League (IUML) as allies. The two communist parties supported the DMK candidate in the Radhakrishnan Nagar by-election on Thursday. Even the MDMK party led by Vaiko, VCK, supported the DMK candidate in the by-poll. “We have to read the full judgement first and then comment,” G. Ramakrishnan, Tamil Nadu Secretary of Communist Party of India-Marxist told IANS when asked about the political realignment in the wake of the 2G case verdict. Thirunavukkarasar did not agree that the ruling Bharatiya Janata Party (BJP) at the Centre can put pressure on DMK by going on appeal against the Delhi Special CBI Court verdict. “The acquittal verdict has come on the merits of the case. Even the appeal has to be made on the same count,” Thirunavukkarasar said. He said “there is not much possibility” of the BJP threatening DMK. According to Thirunavukkarasar, the ruling AIADMK party in Tamil Nadu is a divided house. It has to be seen whether BJP would like to go with the AIADMK. “There is nothing to stop DMK from getting back on the political saddle in Tamil Nadu. The two communist parties and others may not have any reservation in aligning with DMK,” Manivannan said. “For BJP to set its foot firmly in South, it has to break the alliance between Congress and DMK in Tamil Nadu as the ruling AIADMK is riven by factions,” John Arokiasamy, political analyst, told IANS. According to him, BJP has to start from Tamil Nadu for a stronger southern foray, which it could do by going on appeal in the 2G case. “The acquittal of Kanimozhi may also create an internal power struggle within DMK as there may be demands for her to be given higher party responsibility,” Arokiasamy added. According to him, the BJP may want to align with DMK as AIADMK is not strong now and whether DMK would succumb to that pressure has to be seen. “For BJP the 2019 general election is more crucial than the assembly polls in Tamil Nadu,” Arokiasamy added. “There is nothing to stop DMK from aiming for power in Tamil Nadu. DMK may not want to align with BJP,” Manivannan said. On the PMK’s position, former Union Minister Anbumani Ramadoss told IANS: “We continue to hold on to our stand. We will not align with DMK or AIADMK.” Ramadoss said if there was no corruption in 2G spectrum allocation then why had the Supreme Court cancelled 122 spectrum licences and why did the central government opt for auction route later. (IANS) // ]]>