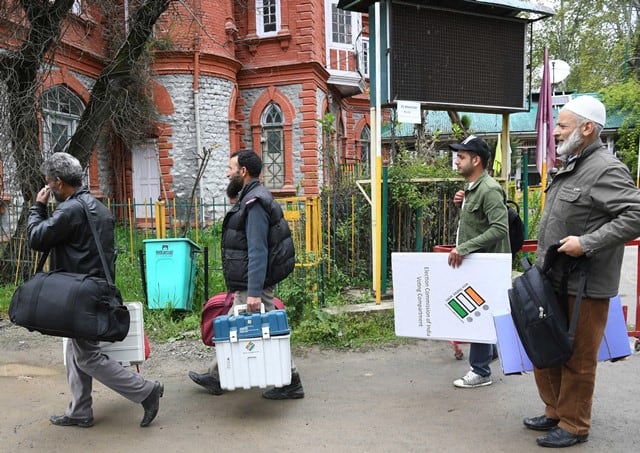 The polling percentage in the fourth phase of Lok Sabha elections was the highest in West Bengal – around 76.44 per cent till 5 pm, said the Election Commission of India (ECI) here on Monday evening.

Eight seats of the state went to the polls in the fourth phase. In 2014 Lok Sabha elections, the polling percentage for these seats was 83.38 per cent.

Jammu and Kashmir recorded the lowest turnout with just 10.5 per cent votes polled till 5 pm. Polling for Anantnag seat is scheduled to be held in three phases. On Monday, Kulgam district went to polls.

In 2014, the polling percentage for Kulgam alone was 36.34 per cent, according to Election Commission of India.

Talking to media persons, Deputy Election Commissioner Umesh Sinha along with other senior officials said that in Odisha, where six Lok Sabha seats went to polls in the fourth phase along with 42 Assembly constituencies, 68 per cent votes were polled till 6 pm.

The rest 12 seats of the states will go to polls in the fifth phase on May 6.

Voting was held for five seats of Bihar as well. In these seats, around 58.92 per cent voters exercised their franchise till 6 pm.

In 2014, the polling percentage for these five seats was recorded at 56.18 per cent.

Seventeen seats of Maharashtra went to polls in the fourth and final phase of polls for the state. The voter turnout was recorded at 58.23 per cent till 6 pm.

In Uttar Pradesh, 13 Lok Sabha seats went to polls on Monday. The polling percentage stood at 57.58 per cent. In 2014, the final turnout for these seats was recorded at 58.39 per cent.

In Jharkhand, where three seats went to polls on Monday, around 63.39 per cent voters exercised their franchise. This was slightly lower as compared to 2014 when the polling percentage stood at 63.82 per cent.

In Madhya Pradesh, where polling was held for six seats, the voter turnout was recorded at 66.14 per cent.

The EC stated that the polling in the first three phases was 0.675 per cent higher as compared to the last Lok Sabha election in 2014.

According to the Election Commission, polling was largely “incident-free” except in West Bengal. In Jharkhand, the last voter in one of the polling stations in Chatra damaged the ballot unit.

“In West Bengal, BJP candidate from Asansol Babul Supriyo went inside a booth with his security guard alleging that his polling agent was not allowed to sit,” an EC official said during the press conference.

“When the CRPF ASI in-charge protested the entry of security guards with the arms inside the booth, he pushed him physically and entered the booth along with his security guard,” he added.

“A case was also registered against Babul Supriyo and against unknown persons for breaking the glass of Babul Supriyo’s car,” he said.

The remaining three phases of Lok Sabha polls will be held on May 6, 12, and 19. The counting of votes will be done on May 23.