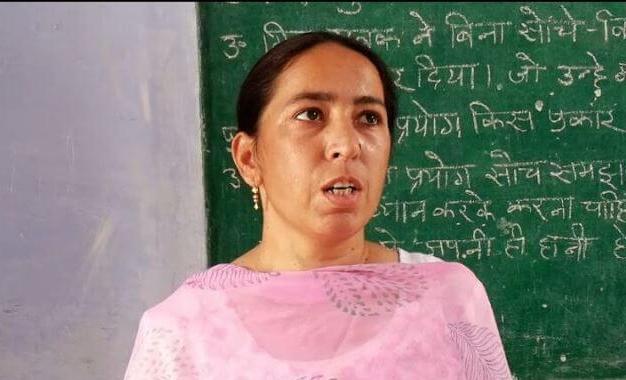 In her late thirties, Safia Rafeeq is a schoolteacher at Dhanaura Junior High School, Amroha. Safia is gladdened by the closure of an abattoir near the school. She hopes that the current academic session will mark the return of students who had dropped out due to health and hygiene issues caused by the unbearable stench.

The job of a government schoolteacher is considered a godsend by most women in Uttar Pradesh, but when I was posted at Dhanaura Junior High School in 2013, I would ask God what sin had I committed to get here. When I joined this school, it was impossible to stay inside the premises without a wet cloth wrapped over your nostrils because of the unmindful disposal of the carcasses and lack of attention to by the slaughterhouse. The situation was even worse for the young (a junior high school in Uttar Pradesh enrolls students up to Class VIII only). They would have recurring respiratory problems and it was not uncommon for the students to complain of giddiness and nausea. Younger students would faint in the school all time; vomiting episodes were common too. We had no other option but to grant students leave generously, even if it meant poor attendance and keeping behind the curriculum. Health came first. While I gradually adopted to the new environs, and continued to discover ways to beat the stench, I also kept trying to get myself transferred from this school. It didn’t take long for the dropout rates to go up. Those parents who could afford, transferred their children to other schools while several others decided to keep them away from Dhanaura. How could I blame them? Even teachers had second thoughts of staying in the job! Few in the municipal administration could be bothered. By early last year, we were left with barely 50-60 students in the entire school; normally, one single class section in a government school has such strength. Things worsened when we noticed that even the groundwater in the area was contaminated. The hand-pump water inside the school became smelly and became reddish. By summer, the school strength dwindled further. Desperate to set things straight, we approached NGOs for help who arranged potable water for students from other areas as well as face-masks to bear the foul air. But that’s all we could do; even the involvment of the gram pradhan (village head) did not make our voice heard where it could have helped. You can imagine the sense of relief when I came to know that the District Magistrate had ordered closure of the slaughterhouse. I silently said my Namaz-e-Shukrana (prayers of thanks). It has been a year now, and the stench is gone. Things are still not completely normal as the groundwater is still a concern. But the student strength has shown improvement. The new session is in process and students are lining up for admission. The building has been whitewashed; there’s optimism in the air. I cannot thank the Yogi government enough for acting this fast. As if by divine intervention, a doctor who runs a small clinic next to our school has assured parents of free medical aid to students in case of an emergency. The local legislator recently visited our school and assured the children that things will only go better from here onward. Insha Allah! 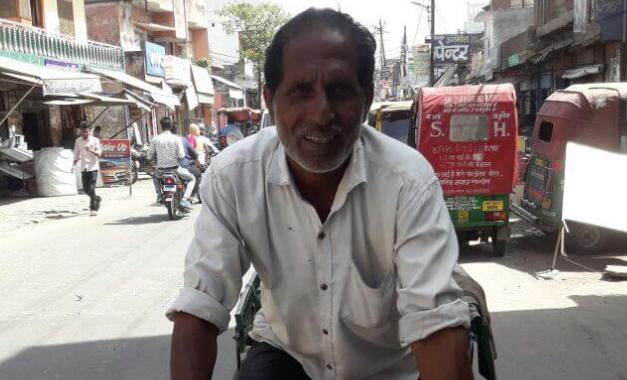 Shabbir Alam is a former employee of AQ Frozen Foods Pvt. Ltd, an abattoir in Uttar Pradesh’s Amroha district now closed down for various irregularities as per a state order. Alam is 50, and has to now earn his living as a rickshaw puller in Amroha town.

I can never forget the fateful morning of July 28 last year, when I went to the factory and found the gates sealed, along with a notice pasted on it from the DM (district magistrate) Sahib’s office. Colleagues told me that local Bharatiya Janata Party leaders had complained about some irregularities in the abattoir to get even with Bahujan Samaj Party leader Naseemuddin Siddiqui (now expelled from the party, Siddiqui was allegedly a part owner of the unit). The Yogi government was quick to oblige. My fate too was sealed. When elephants fight, it is the grass that suffers. Nearly 400 men lost their livelihood at one stroke of Yogi’s ‘knife’. I want to ask you who is the real butcher? Now, at 50, I am forced to pull a rickshaw in the town area, which hardly matches the income and comfort of the life in the company. In my five years at the slaughterhouse, I had learnt the art of skinning the animals. I was taking home about Rs 5,000 every month. My friends told me I could earn double the amount if I proved my skills at abattoirs in bigger towns. My three sons also chipped in with odd jobs. We lived a decent life, including weekly off days to be with family. Now a day off from work means loss of precious earnings. Already my income is half of what I earned in the factory. I make Rs 100-150 a day. Nobody pays generously to a rickshaw puller in a place like Amroha. The work is back-breaking labour of 12 hours, in harsh sun or bitter cold. What else can I do? I am illiterate and have no skills to find another job. Some of my colleagues who lost their jobs took to carpenter shops here but with too many of us on the road, jobs are few and far between. Some (of the ex-workers) have migrated to different states to work as farm labour, but they are young men with small families. I have a large family (three sons and two daughters-in-law), it will be difficult for us to move. It is important that I stay here. Only good thing is that hard times have made my sons more responsible. They now take their odd jobs seriously and contribute towards the expenses of the family. My wife too, after her household work, uses a cot to lay out pan masala and tobacco sachets for sale. The earning is not much, but every penny helps. I often run into my former boss at the factory, a kind-hearted man. He tells me to remain positive as the Allahabad (High) Court is seized of the matter and, Insha Allah, the factory will re-open soon. One thing has still not changed from the old times. After calling it a day, I visit the chai shop outside the factory to catch up with my old colleagues. There, over warm tea in small plastic cups, we remember our heydays in the factory. Some have left the town, but there are still less than a dozen of us who still meet up in the evening and pray together for the re-opening of the abattoir. 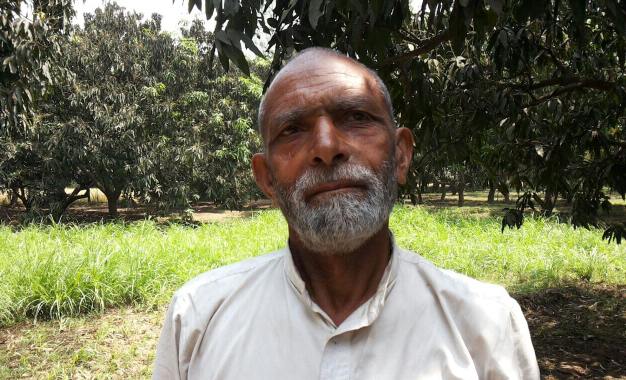 Noor Hassan, a 55-year-old mango-grower from Dhanaura village in Amroha, Uttar Pradesh, saw his trees go barren because of effluents from a nearby abattoir. His annual income dwindled from a few lakhs of rupees to nothing. Today, with the closure of the slaughterhouse, he looks forward to revived fortunes.

It was almost a decade ago, in 2009, when we first saw this slaughterhouse coming up in our village. Behanji (Bahujan Samaj Party leader Mayawati) was the chief minister then I remember, and many of us felt it would create jobs for the local youth and improve the roads linking our village to the highway. Our optimism was shortlived, for we soon realized the slaughterhouse had only brought misfortune. It was not just my mango orchard but all the farmland falling within a radius of 3 km of the slaughterhouse was affected. Grain crops, fruits and vegetables: all suffered in quality and yield. The following season, my trees stopped flowering and bearing fruit. We sought help and were told that the chimney of the ‘butcherkhana’ spewed toxic and chemical-laden fumes. This had a disastrous effect on the crops. We also ran from pillar to post, raising the alarm on this environmental disaster in our lives, but nobody cared. The owner of the slaughterhouse had deep pockets and high reach in the establishment. My income dried up. I left the orchard to the mercy of Allah and diverted my focus to our fields that were far away from the factory. I managed to keep the kitchen going at home. With a change of guard in 2012 (when Akhilesh Yadav-led Samajwadi Government came to power), we saw hope as the Yadav family had roots in farming. We went to Lucknow several times but all we got were false assurances. Apparently, an ex-minister and SP leader was a partner in the factory. The problems only grew from there, affecting not just the air but the groundwater as well. Our water pumps started pulling up dirty- foul-smelling water. It had become quite unbearable. In August 2014, we organised a huge panchayat in Dhanaura where hundreds of farmers gathered. Our protest continued for 95 days, and the authorities finally woke up and took note. The factory was sealed by the administration. It didn’t last. The owners of the slaughterhouse approached the High Court and the closure notice was stayed. I have three children and during this time, all were studying in Meerut. My children would often advise me to sell all the land we had and move out. But I am a firm believer in Allah, and decided to wait. A farmer will sell his land only when all options run out. The Yogi government was an answer to our prayers. In less than two months of his assuming power, district officials sealed this house of evil. The problems have not gone immediately, but did we didn’t expect them to. In time, the land would heal itself, I knew. Then, one day, for the first time in the last eight years, I saw blossoms on some of my mango trees. I cried. I am thankful to Allah and confident now that my good fortune will return.