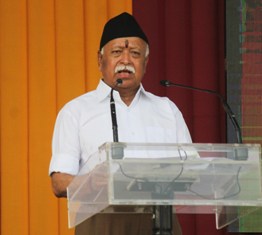 Ahead of the Gujarat elections, RSS chief Mohan Bhagwat on Friday raised the pitch for a grand Ram temple in Ayodhya, saying it will be constructed only at the disputed site and “nothing else” will be built there.

“The Ram temple will be constructed at the site of Ramjanmabhoomi and nothing else will be built. It will be constructed and that too in its original form and with the same stones. It will be built under the leadership of those who led this movement and have been holding its flag for 20-25 years,” he said at a three-day ‘Dharam Sansad’ of the VHP here. “Time has come close. We have to be very careful and take steps one by one. We don’t have to think about anything else.

“For the welfare of Hindu society and for the universal welfare of the world, let the Ram temple be built at Ramjanbhoomi in Ayodhya. This is my only wish,” Bhagwat said after the head of Pejawar Mutt, Vishweshateertha Swamiji, said that construction of Ram temple would begin within one year after crossing all hurdles. This is the first time that Bhagwat has spoken so vehemently on the Ram temple issue in a public address. His comments assume significance in the context of renewed mediation attempts by Art of Living founder Sri Sri Ravi Shankar to find a solution to the dragging dispute in Ayodhya. The strongest reaction came from Hyderabad MP Asaduddin Owaisi. “An obnoxious statement made by RSS Chief, it clearly gives a message that the #RSS is assuming to be SC. This is a delicate matter and RSS is playing with fire on this issue. I hope SC takes note of this devious design, being laid out by Sangh Parivaar,” said the three-time MP and president of All India Majlis-e-Ittehadul Muslimeen. The Shia Central Wakf Board said earlier this week that it was ready to build a mosque in Lucknow so that the temple could be built in Ayodhya, a proposal which was also submitted to the Supreme Court. Recalling his association with Shiv Sena founder Balasaheb Thackrey, Bhagwat said: “Balasaheb once told me clearly that you cannot build Ram temple by kar sewa only. It needs a tough fight which may take even 20 to 30 years. If you continue with this fight then there is a possibility of construction of Ram temple in 20 to 30 years. He said ‘swayamsewaks’ often come to him and ask when the temple will come up Ayodhya. “I do not say anything to them as I am not an astrologer. It started in 1990. What Balasaheb used to say, we have completed 20 years in 2010 and would complete 30 years in 2020. His words would not go in vain,” he said. Vishwa Hindu Parishad (VHP) activists tore down the 16th century Babri Mosque at Ayodhya on December 6, 1992, claiming it had been built after destroying an original Ram temple. The VHP then raised a makeshift Ram temple, saying it was where Lord Ram was born.


#India wants to build #Ramtemple by replacing a #Mosque based on the theory that lord #Ram was born there while many Hindu historians are still unsure where Ram was actually born. This is as funny as it gets, they want to destroy lives & unity merely on speculation ?

“Mohan Bhagwat” Safe the cow and make the temple but don’t make drama and don’t spread hatred among Indians. oops and safe the cow from road accidents too.?

#ISupport @RSSorg Chief Mohan Bhagwat Ji, on Friday he made a strong pitch for building the #Rammandir at the disputed site in Ayodhya, saying only the mandir would come up there and not any other structure. Addressing the “Dharma Sansad”, a congregation of 2,000 Hindu saints. pic.twitter.com/XPUKePfaAH

There is a remarkable absence of older Ram temples remaining not only in Ayodhya but throughout North India. That is because they were systematically destroyed and not allowed to rebuild. Legacy of oppression that should be exposed in needed rewriting of India’s history. https://t.co/QeYSXcPPJX

Muslim masses shud declaim their conventional leaders who used them for their selfish end & reconnect with our common heritage & culture, stand for reconstruction of Ram temple in Ayodhya. Be part of future history.