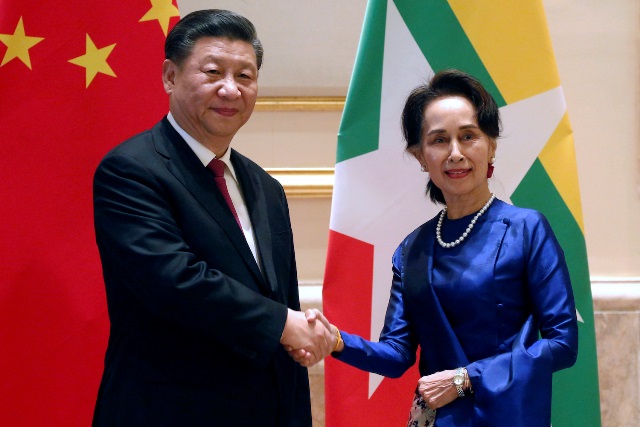 Chinese President Xi Jinping’s two-day visit to Myanmar (January 17-18) was closely watched by India. Xi reinforced his pet Belt and Road Initiative which had slagged, though Myanmar had signed in by 2018. President Xi’s personal push will give the much needed political impetus to bring fresh energy to the BRI projects in Myanmar.

Myanmar is in the doghouse at the moment with few Western corporates willing to invest in the country, since the 2017 military crackdown on Rohingya minorities, many of whom had to flee the assault of local Buddhists as well as the army. The UN had termed it a genocide against the country’s Muslim minorities. All through this period and even earlier when the military junta got no truck from the Western democracies for the house arrest of pro-democracy icon Aung San Suu Kyi, China had steadfastly stood with Myanmar.\

Once again when the government as well as democratic leader Aung San Suu Kyi have been heavily criticised for not protecting the Rohingyas, China sided with the government in power. China’s stand was on expected lines as the Communist Party of China had never bothered much about human rights, leaving it to individual nations to deal with their problems. The one exception is Kashmir, where it has consistently supported ally Pakistan and raised the matter twice at the United Nations Security Council. Even that did not pay off as no resolution was passed against India, thanks mainly to other members of the UNSC.

With Prime Minister Narendra Modi in the saddle, Rohingyas who would in normal circumstances thronged to India, were not welcome. So they fled to Bangladesh and few have the confidence to return home. New Delhi went out of its way to stand by Aung San Suu Kyi and her government. So while the rest of the international community, led by the US and Europe had turned against Myanmar, Asian giants India and China have continued their steadfast support to the government in Naypyitaw, Myanmar now has excellent political relations with both countries.

Despite the common approach to Myanmar, India is uneasy at China rapidly spreading its wings in a country on its backyard, bordering its sensitive north eastern states. For any country, its immediate neighbourhood is vital for its security and having China on its very door step is a matter of grave concern to strategic planners. Every neighbour of India and China like to play out the rivalry of the two Asian powers to their own advantage. It has happened in Nepal and in Sri Lanka under Mahinda Rajapakse. It can also happen in Myanmar.

ALSO READ: India-Sri Lanka: Off To A Fresh Start

For now China is way ahead of India in Myanmar. As the world’s second largest economy, China has the economic clout to finance infrastructure projects across the world. Developing nations are desperate for money and one that comes with no strings attached on democracy and human rights is what these nations want. This is why Myanmar is so happy with President Xi Jinping’s visit. For Myanmar, largely isolated from the international community since the 2017 massacre of Rohingyas, China’s support is a boon. And it is reinforced by generous financial gains for Myanmar.

At the end of the visit the joint statement released by the two sides is an indication of the growing trust between leaders of both countries.  The statement read that China “firmly supports Myanmar’s efforts to safeguard its legitimate rights and interests and national dignity in the international arena”, an obvious reference to Western criticism of the country. China was also keen to advance “peace, stability and development in Rakhine State”. China is today Myanmar’s largest investor. Significantly, Xi and Suu Kyi talks yielded thirty three agreement, though as always these remain opaque.

Kyaukphye is emerging as a vital cog in the BRI scheme. Kyaukphyu is the terminus of Chinese oil and gas pipelines. This area has oil and since May 2017, it has carried 22 million tons of crude oil from Kyaukphyu to Yunnan province of China The Kyaukphyu deep-sea port and economic zone calls for an investment of nearly $1.3 billion. The China-Myanmar Economic Corridor was added when Aung San Suu Kyi visited China in 2017. The economic zone envisages a railway line between Kyaukphyu to Kunming the capital of Yunnan province, through Mandalay. Aung San Suu Kyi once a great friend of India, has played her cards right and hopes to benefit from friendship with both Asian rivals, now that the US and Western democracies have turned against her.

During a banquet for Xi, Aung San Suu Kyi assured China that her country always stand by its giant neighbour. “It goes without saying that a neighbouring country has no other choice, but to stand together till the end of the world,” reports quoted her as reassuring the visitor. Myanmar’s military are also on board. While on a visit to Beijing last April, commander-in-chief of Myanmar’s army, senior General Min Aung Hlaing had assured his hosts that the armed forces backed China’s BRI and wanted it to be a success in Myanmar.

Considering the current bonhomie between China and Myanmar, where does India stand? As pointed out earlier, political relations are excellent, with India going out of its way to extend support to Myanmar over the Rohingya issue. Concern about China’s growing footprints in Myanmar in 1992, when it was under military rule and Aung San Suu Kyi was backlisted by the junta, made Narasimha Rao change track. India had, like the Western world, refused to deal with the military rulers. But seeing Beijing fill in the vacuum, Rao decided to engage with Myanmar’s ruling regime. Now Myanmar is seen as a bridge between India and the ASEAN nations.

During the first NDA government headed by Atal Bihari Vajpayee, talk of connectivity projects took shape. The Kaladan Multi Modal Transport was conceived and begun around 2010. Yet even now the project is not complete, though India has completed the deep sea Sittwe project, again in Rakhine state and handed it over to the Myanmar government. The problem with Indian projects is that the time taken to complete a project takes too long. The government realises this and steps are now being taken to co ordinate work between different departments of the state and central governments and Myanmar authorities better.

To compete with China in the neighbourhood, India needs to be much more efficient in executing projects. Delhi needs to consider why it has done so well in Afghanistan and replicate that model. India is lagging far behind China and needs to be more focussed unless it wants to lose Myanmar to the Chinese dragon. Efficient execution of projects and abundant cash flow has made China a potent force in the region.

India has lost much valuable time but can catch up if it gets its act together. Instead of concentrating on massive projects, India’s strength is in institution building and working in fields of agriculture and small water projects which touch lives of ordinary people. Delhi has to play to its strengths and not imitate China. Perhaps that it the key to success against the rising Asian super power.