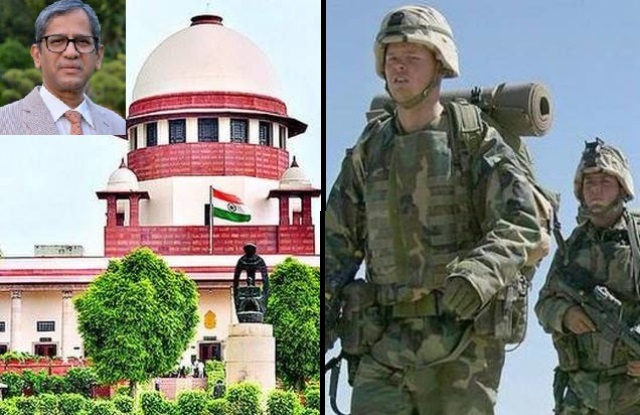 Supreme Court And Its New-Found Mojo

The Supreme Court has so far been accused by almost everyone outside the Bhakt world, to be Modi’s kangaroo court (I ask My Lords’ pardon, I am only stating what people say), including the protesting farmers who refuse to take their case to SC. Such is the loss of confidence in their Lords, the Justices of India. But now the SC has suddenly found a bit of mojo to prove it is independent. It has challenged revered leader Modiji’s dream of becoming India’s ‘Dear Leader’ by rampart use of Indian Penal Code article 124A.

To the surprise of everyone, the Chief Justice of India N V Ramana has suggested that IPC article 124A, sedition, should be scrapped! What! Imagine Modi ji receiving this news. He probably summoned the Attorney General and ordered him to slap IPC 124A on the Justice. ‘Can’t be done Vasudev Maharaj, he is Chief Justice of India’.

Boldly, the CJ stated, “Sedition is a colonial law. It suppresses freedoms. It was used against Mahatma Gandhi, Tilak … is this law necessary after 75 years of independence?”

That must have sent tremors in the esteemed IAS officers of Indian bureaucracy who probably thought in silence, ‘Umm, we have been running British Colonialism mark 2 all this time with help of sedition and anti-terrorist laws, police brutality and army interventions. Does this CJ understand India will break up if we give that up?’ The IAS was set up by the British and its purpose is to keep the system functioning as was intended.

But CJI went on, obviously raising some blood pressures in the Modi-Shah Government. “The use of sedition is like giving a saw to the carpenter to cut a piece of wood and he uses it to cut the entire forest itself”.  Is the SC turning seditious!

And then sort of ordering the Attorney General, Venugopa, “Your government is taking out a lot of state laws from the law books, why have they not looked into this”. Boom, Boom. Imagine the scene in Home Minister Amit Shah’s office.

Then the Chief Justice went on to rub the entire Bhakt world, “If one party does not like what the other is saying, Section 124A is used, it is a serious threat to the functioning of individuals and parties”. Will it undermine the fourth pillar of Hindutva advance by use of 124A.

There were 93 cases on ground of sedition in 2019 and perhaps a lot more in 2020. Only two have been successfully convicted. But the scars on the rest must have been deep and long waits for court hearings, mentally draining.

124A has been the cornerstone of Government oppression in many areas. This recent case included veteran journalist Vinod Dua who criticised Govt lockdown policy without adequate preparations when hundreds of thousands workers were forced to walk home for hundreds of miles. Govt couldn’t quite say ‘Fake News’ as BBC had reported it, so it clapped IPC 124A for attempt at disaffection.

Other famous cases in history have included Arundhiti Roy (2010), Cartoonist Aseem Trivedi (2012), climate activist Disha Ravi (2020) and JNU Students Union President Kanhaiya Kumar. In 2011 an entire village and some more, were charged with Sedition under 124A. In the protests in 2012-13 against Kudankuam Nuclear Power Plant, 9,000 people were arrested for ‘sedition’.

Not surprising when the law says “whoever, by words, either spoken or written, or by signs, or by visible representation or otherwise, brings or attempts into hatred or contempt, or excites or attempts to excite disaffection towards the government established by law in India shall be punished with life imprisonment!”

With a law like this who needs a dictatorship. North Korea or China should consider becoming democracies to get away with complete suppression of dissent with this sort of law. Western human rights world wouldn’t even notice. After all it has been democratically enacted.

It’s not difficult to see why Modiji doesn’t like any criticism of his policy or character. He is simply upholding a democratic law in spirit and letter. That is what a leader is elected to do.

There is however a corollary. If somebody is convicted under a law still on statue, does the person have a permanent criminal record? If so, as Gandhi ji spent 6 years in prison under this law, and as this law has not been repealed by the wise and the great of Lok Sabha, is Gandhiji an ex criminal? We need a legal position on this.

Let us hope the Supreme Court mojo lasts a few more seconds. People may see that it has exorcised the Kangaroo image to a proper court. Or it could be that even the esteemed Judges have smelt that BJP isn’t invincible in elections.

USA Runs Away From Taliban After 20 Years

Being the most powerful is pointless if you lack stamina and can’t even bully a bunch of hill billies. The United States virtually walked into Afghanistan in 2001 meeting little resistance. They were against a rag tag army of the Taliban, hardly a version of the American ‘Universal Soldier’ with heavy metal, bulletproof everything, night vision equipment, satellite guided laser guns, supported by devastating air firepower, penetrating bombs blowing up deepest of secret tunnels and training that many an army would give anything for if it could afford. Yet twenty years later, with $850 Billion misspent, enough to give every poor American a free medicare for life, the best trained army has been forced to march out in the dark of the night.

The Americans wanted to ‘civilise’ the Afghan people with democracy, women rights and modern education. It would sound pious if it wasn’t that back in USA, millions of Black Americans, potential Democrat voters, have been denied votes by some administrative trickery. And the idea of a female President still shocks half of Americans.

The Taliban simply followed a long tradition of Afghans, particularly the Pashtuns. They get thrown out of their settled towns and villages only to return and chase away the enemy into history. They use the same tactic. They run to the hills, band together and then come back ferociously, persistently and tenaciously. With their home-made weapons, they haemorrhage the invader until the occupier finally decides that it’s not worth it. They did the same now. And they are quite content dying for this repeating sport. About 2,50,000 Afghans have died this time.

The irony of it is that a Taliban run State may yet put in place some form of democracy under a supreme leader after a few years. They will also provide education and jobs for women. The modern State requires some form of representation governance, otherwise missed warlords get angry. Modern economics cannot afford to feed half the population sitting at home, particularly if the State leadership wants the money to acquire big weapons, modern gadgets and have pothole-less roads to drive expensive cars on. It needs all hands to work.

All the same, American think tanks (tinker tanks) will write long articles justifying the crusade explaining how American intervention brought some form of democracy to Afghanistan and rights for women. It was all worth it depriving millions of fellow Americans free medical care. Next door Iran seems to have achieved democracy and women empowerment without American intervention and even by calling USA the devil.