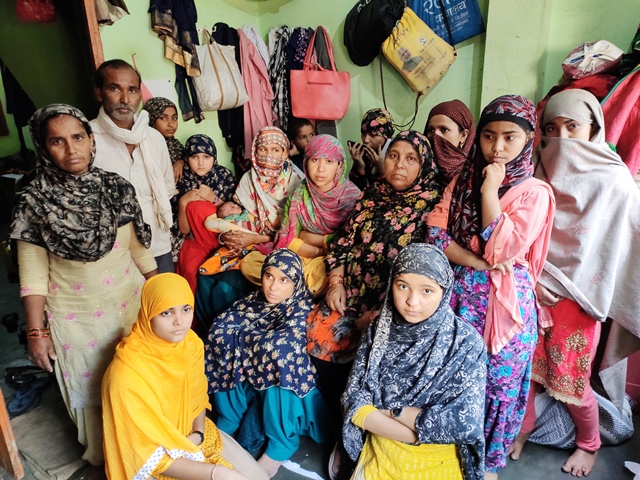 Mohammad Hakim, 45, supplies jute bags to shops in Delhi for livelihood. During northeast Delhi communal violence in February, he provided shelter and safety to over 100 victims at his humble house in Chandu Nagar

It was something I have not seen in my lifetime. We migrated to Delhi from Khagariya district of Bihar 20 years back and since then we have been living here peacefully. We never thought such level of communal violence will ever happen here. On the intervening night of February 24 and 25, houses of my relatives was attacked and shops were set of fire. They called me for help.

My wife went there and saw some police personnel escorting my relatives and scores of other residents of the area, houses of whom were attacked by mobs with stones and petrol bombs. The cops left the rescued people in my lane. As my relatives entered my house, scores of others also pleaded for a shelter for some days. These people included women and young children.

Suddenly there was commotion towards the main road. I realised that stone-pelting had started once again. I didn’t want anyone to get hurt so I asked them to immediately enter my house.

There were 98 people in all including children. All of them managed to find space in my small house for four days. We didn’t have space to sleep for all of us; so we slept in shifts. I had some ration at my kitchen and it all got over in just two days. There was no milk for children so I requested my neighbours to help.

Even in these difficult times, people helped. My neighbours provided food and milk for the sheltered and their children. I remember not sleeping for four nights due to fear. Riots and clashes continued just two lanes ahead of my house. I was afraid that if anyone came to know that I had given shelter to nearly 100 people, their lives could be in danger. So several of us stayed awake during nights and kept a watch on the lanes.

WATCH: ‘Left Only With The Clothes I Am Wearing’

The violence continued for four days and then abruptly stopped. Some of those who had taken shelter into my house, went to see their houses and found them burnt and looted. Their shops were also gutted. Hence, they came back and are still staying at my place.

I have a two-storied rented accommodation of 500 square feet. On the ground floor, I have a small workshop and godown and on the first floor, I have two small rooms, a kitchen and a washroom. It was all full for four days with no space to even walk. In the huddle, there was fear for an uncertain future. Most of those who had taken shelter were daily-wage labourers and vendors. Their livelihoods were completely lost in the violence. They have to feed their children; I don’t know how they will survive.

I am now trying to help these people to get government compensation. There are children who have to appear in the board exams. I have been buying newspapers for them so that we get all verified information about state measure for the riot-affected and holding of exams. God knows for how long these people will stay. I am getting help from my neighbours and other people to feed them. I just hope this never happens again. Both communities have suffered loss of life and property. The government must not allow such horrific thing to happen again.