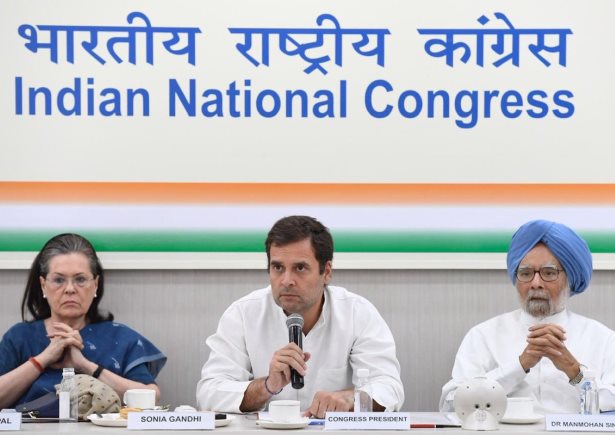 When one of the senior most leaders of the Indian National Congress, Ghulam Nabi Azad, recently said that the party was at its “historic low” and that if elections to appoint a new leader of the Congress Working Committee (CWC) and other key organisational posts were not held soon, it could mean that the Congress could continue to sit in the Opposition for the next 50 years, the furore his statement caused was not unexpected. Such voices of dissent are not common in the Congress party and, expectedly, a Congress leader from Uttar Pradesh quickly demanded that he be ousted from the party.

But Azad, who is the current leader of Opposition in Rajya Sabha, and has held key posts as a Cabinet minister, and as a chief minister of Jammu & Kashmir, like the young child in the Hans Christian Anderson folktale, The Emperor’s New Clothes, was telling the blunt truth. Decimated in the parliamentary elections of 2019, the Congress has been plunged into a crisis like it has been never seen before. Its leadership, still controlled by the Gandhi family—Ms. Sonia Gandhi continues as the party’s interim president after her son, Rahul Gandhi, stepped down from the post in 2019—has lacked decisiveness and several party leaders, have either left the party to join the ruling Bharatiya Janata Party (notably Jyotiraditya Scindia), or have dissented against the Congress party’s leadership.

In late August, 23 senior leaders of the Congress party, including five former state chief ministers, members of the CWC, MPs, and former central government ministers, wrote to Ms. Gandhi calling for sweeping changes at all levels of the party. The letter focused on the erosion of the party’s support base; and loss of support from among India’s youth, who make up a substantially large proportion of the nation’s electorate. The letter, in effect, was a sharp indictment of the party’s leadership.

When Rahul Gandhi took over as the Congress’s president in 2017 it was in line with the sort of dynastic leadership lineage that one has come to expect in the party. The nadir of Gandhi’s short-lived tenure—he stepped down in less than two years—was the second defeat of the party he was leading at the hands of the BJP in 2019. Since then the Congress, already nearly marginalised after the 2014 parliamentary elections, which it also lost, has become a faint shadow of what it was. Among India’s 29 states, the party is in power in the states of Punjab, Chhattisgarh and Rajasthan where the party has majority support. In Puducherry, it shares power with alliance partner, Dravida Munnetra Kazhagam (DMK), the regional party. And besides, simmering dissent within the ranks of its central leadership, the Congress has also lost much of its direction.

Partly that has happened as a side-effect of a series of debilitating electoral defeats; but it is also the lack of a decisive leadership that has weakened and made it rudderless. The contrast between the two central parties is stark. The strength of the BJP leadership has never been greater than it is now. The Congress’s, on the other hand, has never been lesser than it is now.

The Congress may have missed an opportunity to revamp its leadership three years ago when Ms Gandhi stepped down and a new president was to be appointed. As it happened, it was her son who succeeded her. And that might have been the most serious wrong move by the party to create a strong leadership. For Rahul has never really demonstrated his ability to be the leader of the party. His track record—whether it is in leading an electoral campaign or strategy, or in restructuring the party—has been lacklustre to put it mildly.

Back in 2014, before the parliamentary elections, this author had written in a column for an Indian newspaper that the Congress had done a wise thing by not naming Rahul (who was then the party’s vice-president) as its prime ministerial candidate. The argument that I put forward was that he was not ready for the role. And although wishing that the Congress party will come back to power when the next parliamentary elections are held is, at least for now, in the realm of fantasy, Rahul still isn’t ready for that role. Then and again in the 2019 elections, the BJP went to the polls with a strong prime ministerial candidate, Narendra Modi, and won both times.

The thing is that the Congress has never really looked beyond the Gandhi family for its top leadership position. In 2017, Rahul took over from his mother; in 2019, when he stepped down, his mother became interim president, a position she continues to hold even as dissent, and calls for a new leadership are welling up from within the party ranks. It is true that the Gandhi family has acted like some kind of glue that keeps the Congress party together. The family’s writ runs large in the party and dissent has been discouraged. Probably not any longer.

The letter by senior leaders; Azad’s recent statement; the resignation of several leaders (some of them to join the BJP) all of this point towards one thing: the Congress cannot exist in the manner it has been for so long. A non-Gandhi leader is what the party needs most now. But even if it finds one, that person has to enjoy the autonomy and freedom to change how the party organises; how it functions; and how it strategises.

The first step would be for its current leadership to heed the voices of reason that are surfacing from within. Its most important leaders, some of whom have much more successful political achievements than, say, Rahul Gandhi, have demanded changes in the way the party is led and how it functions. For Ms Gandhi, as interim president, that is the writing on the wall—in clear and bold letters. The second thing for the party and its main movers is to realise that the climb from where the party has fallen is going to be a long and very arduous one. The morale of its grassroots-level workers is low; dissent has spread among its leaders in various states; and the BJP has strengthened its position over the past six years that it has ruled at the Centre.

The Congress’s comeback, if the party reads that writing on the wall, is going to be slow, and often not painless. And, if those warning signs go unheeded, then what once was India’s all-powerful national party could hurtle towards extinction.