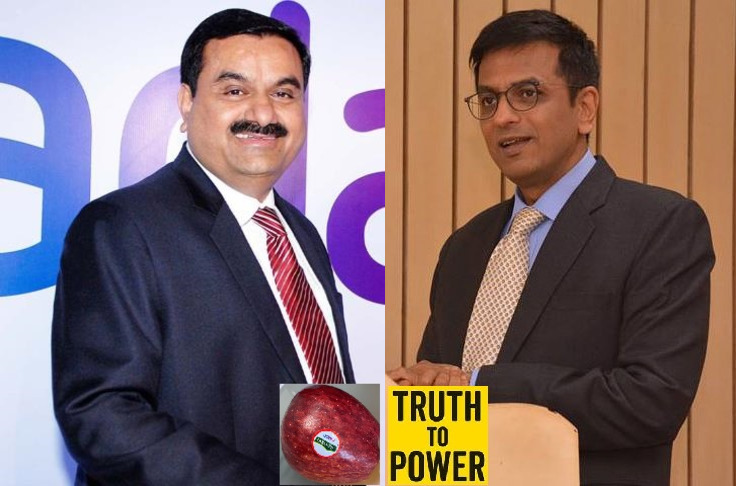 Prophetically, PM Modiji assured farmers that they had nothing to worry as selling in the open market would fetch higher prices for them than the meagre MSP. Modiji has undergone quite a metamorphosis in his premiership, changing from a savvy fashion icon with multi-lakh suits to a simple Yogi. Perhaps in his new incarnation in office he might have developed talents of a ‘seer’. But even the best Yogis get it wrong at times. This time pesky Adani has done exactly opposite of what Modiji predicted.

In Himachal, farmers decided to give the new deal a chance. Apple growers went to Adani Agrifresh Ltd to sell their stock. Adanis and Ambanis were going to be the new saviours of farmers, able in theory to give them twice the price of those state run Mandis and MSPs.

As it turned out, Adani offered them some ₹12 to ₹72 for a Kg of apples depending on their ‘happy’ colour, meaning quality and how red they were. Quick calculations on their fingers showed farmers that after calculating travel costs, input costs etc, they were in fact subsidising the apple free market. Usually it is the Government that subsidises farmers.

Several turned to the good old state run Agriculture Produce Market Committees (APMCs). Not surprisingly they were offered more, between ₹90 to ₹125 per Kg. Even the so called illiterate farmer, as Modi Government had suggested farmers don’t understand economics, worked out that ₹90 offered by APMC for the lowest quality apple is much higher than ₹72 offered by the capitalist Adani for the best quality Apples. It became a bit of no brainer for farmers to work out where to sell their apples, the state sector or the free market.

To rub salt into Modiji’s wounds, Adani’s apples sell for ₹250 per Kg after a bit of shiny plastic or other packing. A hefty 300% profit. It doesn’t seem after this, the farmers protest is going to go away in a hurry as nice old Adani has just proven them right. He just proved their fear that the freemarket will drive down the prices instead of enriching farmers. Perhaps, Modiji’s Yogi stage of life will come handy somewhere else.

Justice Chandrachud is becoming a bit of a star celebrity among the liberal minded Indians. He has been making the right sounds, giving the impression that he is willing to uphold the law against any Government trying to do a bit of ‘bendy mendy’ with the Constitution. Perhaps he wants to make a name in the historical hallways of Supreme Court to stand shoulder to shoulder with the likes of Bhagwati and Iyer. However after unravelling his latest speech, it is obvious that there is a bit of a way to go before joining legends like Iyer and Bhagwati.

He suggested that speaking out has been a privilege of upper castes so far and told all citizens of India to enjoy the freedom to express their opinion. Suggesting “women, Dalits and members of other marginalised communities have an important role to play in this context”, he said. “Since they did not enjoy the freedom to express their opinion, their thoughts were confined, crippled and caged. After abolition of the British Raj, the truth became the belief and opinion of upper-caste men.”

Perhaps he was subtly alluding to the Government when he said at the virtual event totalitarian governments are associated with a “constant reliance on falsehoods” and it is the duty of citizens to strengthen public institutions and expose the “lies of the State”.

Great words, one might say. But when the common man hears of journalists being slapped with ‘sedition’ charges after saying something unflattering about Modiji or the Bhakts and others speaking their version of truths such as Government has failed the people during the pandemic being thrown into jails, the esteemed Judge’s rally cry sounds a bit hollow. Where is the rickshaw-wallah going to get courage to ‘speak truth to power’ is a mystery which Justice Chandrachud might also want to solve.

Of course His Lordship can introduce suo moto cases in the SC and order dropping of all charges against those who ‘spoke truth to power’. But that hasn’t happened so far,

However, he gave an example, where a ‘clever’ citizen might sense the fear even in their Lordships rhetorical posturing. The Justice started, “It can’t be said that State will not indulge in falsehood for political reasons even in democracies”. An original statement of discovery if ever.

Now he is an Indian Judge extoling his average non elitist fellow citizens to “speak truth to power”. For empathy in the statement, one would think that he would have picked an example in Indian post 1947 history that most could relate to, such as the fabricated reasons on the 1984 attack on Golden Temple, the statements of Congress leaders after 1984 Delhi massacres, or the report after Gujrat riots or numerous other examples of explanations given by Indian politicians after riots, massacres, corruption scandals and a lot more that everyone knew were creative tales. These events are close to home and examples that the citizens can relate with. They are examples that citizens could feel should not have happened.

Their Lordship said this instead, “The role of US in the Vietnam War did not see the daylight until the Pentagon papers were published. In context of Covid, we see that there is an increasing trend of countries across the world trying to manipulate data. Hence, one cannot only rely on the state to determine the truth.”

How many Indians know of the ‘Pentagon’ papers in far off land, the USA! Or was the Justice playing it safe while firing his fellow citizens to stand up to politicians?

The Vietnam example is a bit naff. The politicians responsible for that war are dead and long gone. So no problem in ‘exposing the lies of Vietnam’ and still being invited to top legal tables in America. Even if he wanted to avoid the wrath of his own government and deflect away from home, he could have had cited the CIA report on Russian meddling in American elections when Trump was helped but Trump and Senate denied. Now that would have been the Justice standing by what he is preaching. Otherwise ‘speaking truth to power’ is just another fad and fashionable comment these days and Indians cannot be seen to be left out of what is trending around the world.

But if citizens did take his message to heart and start ‘speaking truth to power’, there will be millions of sedition or related charges. Politicians and lies are synonymous in the mind of most Indians. Currently it takes a few decades to get a hearing at the courts. Then it might take centuries if people take his advice.