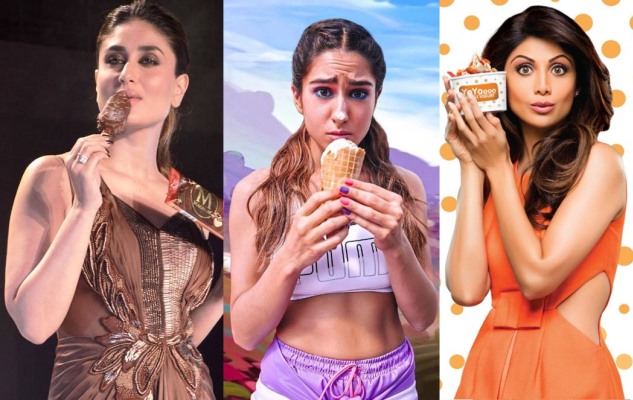 For almost five hundred years Indians have chilled out with Kulfi in the summer season. Legend has it that the frozen dessert was created to please Emperor Akbar and the recipe is mentioned in contemporary texts like Ain e Akbari and Akbarnama that describe a relay race conducted by expert riders to bring slabs of ice from Chur Chandra Dhaar in present-day Himachal Pradesh to the imperial Capitals- Delhi and Agra.

However, it seems more reasonable to agree with the view that the coolant was born in Iran (aka Persia). The word Kulfi is of Persian origin and translates as a sealed/locked container. Kulfi is usually prepared by freezing condensed flavoured milk in tightly capped metal containers that are prised open to serve it. The Iranians are known to have mixed snow with sherbets and myriad fruit juices as early as the 6th century BCE. The cold confection travelled west with Greek and Arabs and spawned the palate-cleansing sorbet.

The Chinese prone to claiming priority of invention and creation of all things point to evidence of a kulfi like dish that was enjoyed more than five thousand years BCE. What is well documented is that Emperor Nero relished wine mixed with crushed ice/snow though his physicians didn’t approve of this practice. Later a Medici princess carried with her the recipe for cool desserts to England wherefrom the Quakers transported it to the New World. American presidents like George Washington and Benjamin Franklin consumed it in large quantities and also served it to their guests.

Though freezing is common in preparing ice creams, gelatos and kulfi the differences are significant. Kulfi is far denser as the milk used is not whisked to pump in the air. No stabilisers or preservatives etc are used. Nor can it be stated that the ‘ice cream’ made in a hand-churned wooden bucket inspired it. Much before the pushcarts introduced firangee ice creams or ice cream parlours opened in big cities countless cities and small towns had acquired a taste for kulfi.

Many cities in north India claim that they have the best kulfi in the land. In Delhi, Kurhemal in Chawari Bazar is the oldest shop (set up in 1906) specialising in kulfi and is famous for its fruit kulfis. The flesh of fruits like mangoes, pomegranates, guavas and apples is skilfully scooped out and refilled with kulfi prepared with it. The fruit retains its original shape and appearance. Roshan di Kulfi in Karol Bag dates back to early 1950s and is as famous for its kulfi as Chole-Bhature. Madhu Kulfi in Agra offers both matka and tinka kulfi and thanks to improved refrigeration and transportation now can be tasted as far away as Pithoragarh in Uttarakhand. Kanpur’s Badnaam kulfi unabashedly boasts of its addictive lure.

In past decades India has witnessed a churn in the ice cream business. Big international players have entered the market to swallow local brands like Kwality. Mother Dairy Amul and Vadilal continue to defend swadeshi turf. There are many regional niche players. Parsi Dairy in Mumbai, Natural and Havemor tonnage are just a few. In Tamil Nadu the legendary reputation of Dasprakasha chain owed a lot to its ice creams. The world of kulfi is also changing. Quite a few have branched out into ‘manufacturing’ (mass producing in a factory) popular kulfis as well as trying their hand at softies in a cone and even ice creams. The younger generation is opening branches and focusing on exports within India and to foreign countries.

Many talented chefs are concentrating on artisanal kulfi, experimenting with exotic ingredients like wasabi, green/blue tea, avocado and more. Some play around with cooling colours (shades of green, light pink and yellow) matching them with flavours recommended in Ayurveda for time tested cooling properties — sandal, mint, khus and rose petals.

Others have chosen the dairy-free vegan route. The health-conscious can opt for sugar free kulfi. Presentation is changing too. The frozen dessert doesn’t always appear on a bed of falooda (thick vermicelli) blushing pink after a generous splash of Rooh-afja. Some lighter than air frothy wispy confections like daulat ki chaat also known as nimish and makhan-malai, malaiyo earlier available only in winters have reincarnated as chilled dessert.

The battle lines are clearly drawn. Will ‘cool-cool, thandi-thandi‘ kulfi conquer the globe or lose its distinct identity as it imitates its distant Western cousins? How will this Cold War end? Certainly not with a thaw! In this instance permafrost will tickle the patron’s palate most.