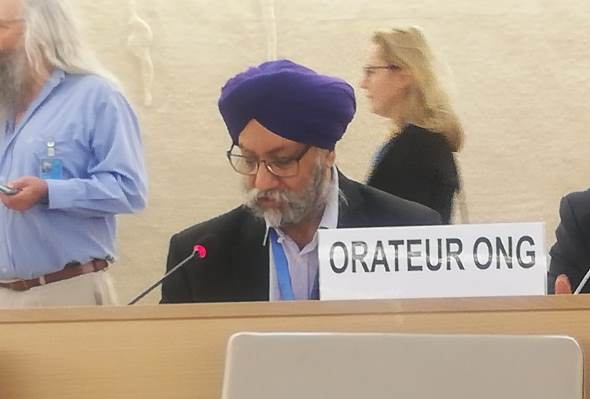 Highlighting several independent report that held Congress as responsible for the killings, Rai urged the government of the day to take further measures to officially identify those responsible and bring them to book so as “to prevent such heinous crimes that remain a blot on the history of India”. LokMarg is reproducing the entire statement at the council meeting here as under: “Sikh Human Rights Group welcomes the report of the Special Advisor on Prevention of Genocide and appreciates the mandate may not extend to retrospective identification of genocide.  However we urge the Advisor and the HRC to monitor progress of justice for victims of previous crimes of genocide, efforts made by the concerned States to punish the perpetrators as well as steps taken to prevent such further crimes, particularly where the issue remains in the public domain. We draw the attention of the HRC to the organised massacres of over 4000, possibly 10000 Sikhs in Delhi in November 1984 by attackers who were bussed in and supplied weapons and lists. The homes and shops of Sikhs were targeted, they were dragged out and killed with iron rods, clubbed to death and many burnt alive with tyres around their necks. The targeting of a single community by organised mobs aided by powerful people holding political positions in the State and when the police as well as Army remained inactive for four days constitutes genocide according to our understanding of the definition. We applaud the bold, emotive and public statement by the current Indian Home Minister Shri Rajnath Singh in calling these crimes genocide in a public gathering. We hope the Indian State will also officially recognise the four days of massacres as genocide. We recognise that efforts have been made through 11 commissions of enquiries and attempts made to convict the leading perpetrators but judicial process has frustrated justice. Independent reports have identified the Indian Congress Party to be responsible. This party held power until recently. Its leader apologised for the crimes but failed to convict the perpetrators when his party was in power. We urge the Indian State to take further measures to officially identify the political party responsible, hold the senior politicians of the party to account and take steps to prevent such heinous crimes that remain a blot on the history of India. We request the HRC to monitor the progress of and assist the current Government in its efforts to deliver justice for victims and punishments of those responsible for the Nov 1984 Genocide of Sikhs in Delhi and surrounding areas.”  ]]> 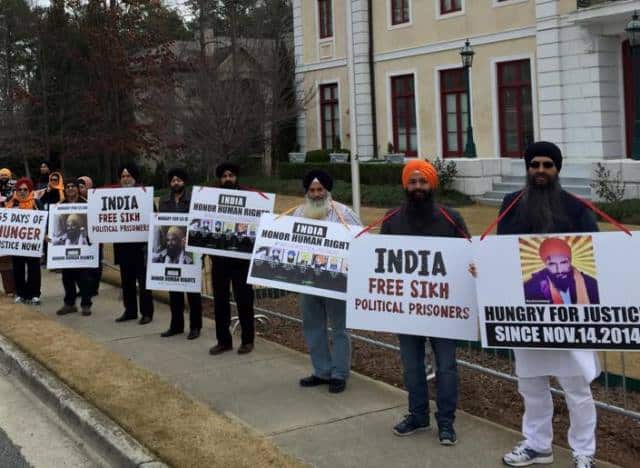 A London-based human rights organisation on Tuesday raised the issue of Sikh political prisoners languishing in India at the United Nations Human Rights Council meeting in Geneva, and demanded their release at the earliest.

Speaking at the Council meeting, director of the Sikh Human Rights Group Jasdev Singh Rai said these are prisoners who remain detained in Indian prisons long after they have served their sentences. “Two and half years after Prime Minister Modi made a commitment to the Sikhs in London that these prisoners will be released, they continue to be in prisons,” Rai said.

Underlining some of the India’s incumbent government initiatives to resolve the issues that arose with the international Sikh community following the attack on the Golden Temple in 1984, Rai expressed dismay over the fact that India continues to hold several Sikhs in prisons in violation of their rights, “even when they have long served their sentences”.

“One prisoner Lal Singh, has been held for over 10 years beyond his term. The Government continues to treat him and others as political prisoners,” Rai said, urging India to show sincerity in resolving the rights issue and ensure early release of these prisoners.

Rai said the Indian authorities must realise that that these individuals are Indian citizens. “They cannot be subjected to commitments that are extra-constitutional, such as curtailing freedom of expression. They should be able to enjoy the same freedoms and rights as every citizen.”

Later in a statement issued to the media, the rights body also said at present the highest number and most horrendous of human rights violations are committed by non-State movements and actors. But the current mechanisms lack competence to effectively address this large emerging threat.

It urged the council to explore ways to protect people’s human rights from these movements. “We also request HRC to take note of countries like Canada who engage in political eugenics. They licentiously abuse anti-terrorism legislation inconsistent with permissible derogations to refuse entry to some people who have no record of illegality in their countries or anywhere in the world.” 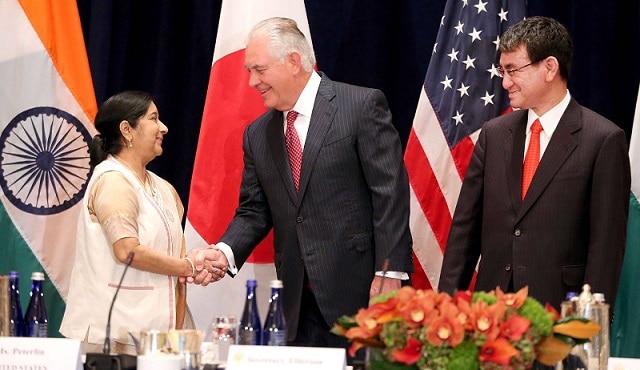 Had a wonderful meeting with US Secretary of State, Mr. Rex Tillerson. We discussed various aspects of India-US ties https://t.co/63go1Qnbi8 pic.twitter.com/zUdmzclAP0

— Narendra Modi (@narendramodi) October 25, 2017 This would be the third foray by President Donald Trump and his administration into a touchy terrain from where three of his four immediate predecessors have beaten a retreat, and one, George W. Bush pragmatically stayed away from. With Washington now promoting a larger global role for India as an anchor of stability in the Indo-Pacific region and as an emerging counterweight to China, the Trump administration could be looking for a way to lighten the drag of Pakistani problems on India. Tillerson’s statement came despite a long history of New Delhi firmly rebuffing involvement by anyone in what it holds is a matter solely between the two neighbours.

America is delusional if it thinks India will allow it to become a mediator on Kashmir. https://t.co/tSRI7yfJBK

New Delhi brandishes the 1972 Simla Agreement between then Prime Ministers Indira Gandhi of India and Zulfikar Ali Bhutto of Pakistan to strenuously oppose any third party involvement in disputes with Islamabad. In the pact signed after the Bangladesh War, the neighbours agreed to settle disputes only by themselves, though Pakistan has since sought to involve others. Tillerson said in Geneva that during his Islamabad visit Pakistanis mentioned their differences with India but did not talk much about US-India ties. Asked about Islmabad’s reactions to Washington’s plans to deepen relations with India, he said, “There was not a lot of discussion about that, other than they clearly have their differences with India, they have their concerns along their border with India.” In what may be a sop to Pakistan, he added, “There are legitimate concerns on both sides of that border as well.” During his campaign for the presidency, Trump had said, “I would love to be the mediator or arbitrator.” But he carefully prefaced it with the caveat, “If they wanted me to.” “If we could get India and Pakistan getting along, I would be honored to do that,” he said. “That would be a tremendous achievement.” In April, the US Permanent Representative to the UN Nikki Haley said about India-Pakistan tensions, “I would expect that the administration is going to be in talks and try and find its place to be a part of that (process) because it’s concerned about the situation.” And heightening expectations, she added, “And also (I) wouldn’t be surprised if the President participates as well.” India had swiftly rejected the offer, stating its position that any bilateral redressal of India-Pakistan issues can “only be held in an environment free of terror and violence”. For all the good intentions of US presidents and UN secretary-generals, it is not just India’s opposition to third party involvement that works against them, but Pakistan’s powerful military syndicate buttressed by its history. Kashmir, which India considers an integral and immutable part of India, is the core issue for which there can be no solution without Pakistan’s military’s agreement. Keeping the Kashmir issue boiling – despite failing to get any active diplomatic support for its cause from anywhere in years – is the very source of the Pakistani military establishment’s power. Dragging the US or others into it is but Islamabad’s ploy to try to weaken India’s resolve – a ploy New Delhi understands. The last – and perhaps the only – third party mediation was in 1966 when Soviet Prime Minister Alexei Kosygin brought Prime Minister Lal Bahadur Shastri of India and Pakistani President Ayub Khan to Tashkent after the 1965 war. They signed the Tashkent Declaration that was to be the framework for peace, undertaking to improve relations between the neighbours and not to interfere in each other’s internal affairs. But it unravelled in five years. Starting on a path strewn with hubris and failures, former President George H.W. Bush — the “senior” — tried to mediate between India and Pakistan in 1990 through his Deputy National Security Adviser Robert Gates to defuse mounting tensions as both countries massed troops along their border. Gates is reported to have facilitated exchange of information between the two sides that de-escalated that particular tension — a claim India disputes. However, Gates, who later became Defence Secretary under President Barack Obama, did not try to mediate the broader issues like Kashmir. Bill Clinton, who succeeded the senior Bush, suggested in 2006 that Washington seek a role in the neighbour’s dispute. “I think the United States should be more involved there, even though I think they’ll have to work out this business of Kashmir between themselves,” he said. But he was roundly rebuffed by Jaswant Singh, who was the External Affairs Minister. George W. Bush, who followed him as President, however, was more attuned to New Delhi’s sensitivities and took a realistic approach refusing to get involved in India-Pakistan disputes. Condoleeza Rice, who was then his National Security Adviser, rejected in 2002 Pakistani President Pervez Musharraf’s pleas for mediation. “The USA is always prepared to help in any way but we don’t believe this is something that mediation or facilitation is going to help,” said Rice, who later became the Secretary of State. Barack Obama backtracked and said after his 2008 election, “We should probably try to facilitate a better understanding between Pakistan and India and try to resolve the Kashmir crisis so that they can stay focused not on India, but on the situation with those militants.” But the idea was smothered by India’s opposition – only for his successor’s administration to release yet another trial balloon. (with IANS) // ]]>