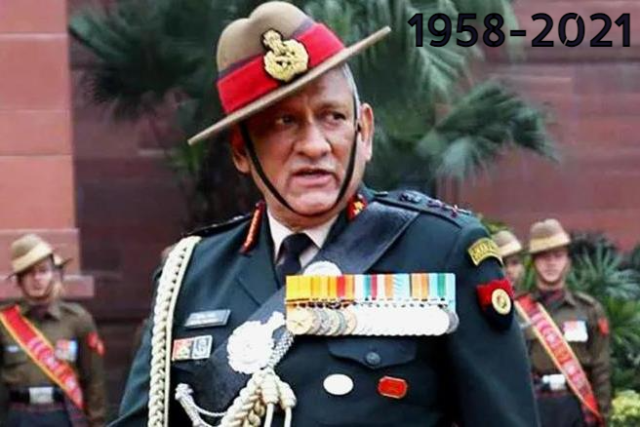 The tragedy that occurred due to the air crash on 08 December in Nilgiri Hills in vicinity of Wellington, Tamil Nadu, resulting in death of 13 out of the 14 passengers including India’s first Chief of Defence Staff (CDS) General Bipin Rawat and his wife Mrs Madhulika Bipin, left everyone including uniformed men, the government and citizens numbed. General Bipin Rawat, PVSM, UYSM, AVSM, SM, VSM, a man of destiny, came from a traditional military background. His father, Lt Gen Laxman Singh Rawat got commissioned into 5/11 GR, commanded the battalion and as a Lt Gen commanded the Maharashtra & Gujarat Area in Mumbai. The son following his father’s footsteps, not only did all that but surpassed his father’s achievements, became the Chief of the Army Staff (COAS) and the first CDS!

Little did I know on joining the Directorate General of Military Operations (DGMO) as a Lieutenant Colonel in 1993, that the young unassuming Major sitting opposite me would reach such amazing heights in his military career! I found Major Bipin Rawat totally grounded, quick on the uptake and possessing an analytical mind. He was meticulous in handling classified documents and would pull out the required file in a very systematic and organised manner inspite of all the ongoing chaos and confusion in our Section MO 3, during crisis management.

While Major Bipin Rawat looked after the conventional operations in Jammu &Kashmir, I was on counter insurgency desk and invariably both of us had to put our heads together and integrate our papers made for the DGMO to brief the COAS or the Raksha Mantri. Thus, we acted as a team and spent many a late nights together in the office if some important missions were going on. He always retained his positivity and demeanour and his levels of dedication and stamina to work under pressure were worth emulating. After long and grilling hours, once an operation was over, we made it a point to share a drink at his place or mine. We were both staying in NOIDA and were fortunate to have pick and drop facilities to the office at odd hours.

Over the years, in his outstanding career, Gen Bipin Rawat acquired a lot of operational experience and strategic vision which helped him in holding higher appointments very naturally and effectively. He got decorations after all his command tenures. As a Corps commander in the North East, he ordered a trans-border counter insurgency operation to annihilate terrorists belonging to NSCN-K group thereby setting a precedence for surgical strikes launched after Uri and Pulwama incidents and taking the battle into the adversaries land. As the first CDS of India, he set up mechanisms wherein his office was a bridge between the defence forces and the civilian government, thus giving a take off point to his successors who can further refine the procedures.

As we kept meeting at various levels, I was very happy to see that he was still brutally frank and as blunt and clear headed as he was in his younger days. Inspite of the higher and prestigious appointment that he held, underneath he remained grounded and accessible. Even as the COAS and CDS, he spoke his mind, calling a spade a spade, which sometimes did not go well with the public or powers that be. Since he meant well and spoke in the national interest, he could easily get away with it!

When we met at a wedding reception in Chandigarh sometime back, I could see the passion in him to bring in meaningful reforms and changes in the services to meet the challenges of modern day war fighting. He very swiftly took me through his plans to achieve time bound results and was aiming at making the defence forces “a lean and mean fighting machine”. Theatrisation of the defence forces by creating threat based Theatre Commands opposite our adversaries for Northern Theatre and Western Theatre was one of Gen Bipin Rawat’s pet project to achieve optimisation of all resources available in the theatre belonging to the three services.

In addition to the two geographical Theatres, Air Defence Theatre and Maritime Theatre have also been planned to be raised. This project remains work in progress. Whereas, Gen Bipin Rawat was well aware of the efforts of turf guarding by individual services, he was able to reason out the necessity of going in for these theatre commands to have better integration, synergy, optimisation and inter-operability during operations. He confided in me that he had political establishment, complete backing in what he was doing. Our northern adversary China has already raised the Theatre Commands and considering the posturing on our northern borders, it is essential that we also coordinate comprehensive national power in protection of our borders.

One is tempted to compare the journey of General Bipin Rawat with that of General Douglas Mac Arthur of the US Army. General Mac Arthur also inculcated the ethos and elan of the forces from his father who was also a General. Both were out spoken and had the convincing power to alter the opinion of their audience. Both the Generals had a personal connect with the rank and file as well as officer cadre. In different ways, both were charismatic and could influence people around them. Both were also coming into some controversies time and again, but like true fighters, stuck to their guns and had courage of conviction. Gen Mac Arthur and Gen Bipin were great orators and could articulate extremely well keeping their operational plans simple, workable and understandable by the commanders who had to get them executed. They were battle hardened and bold leaders who led from the front with personal example. They could easily read the minds and psyche of the adversaries and outperform them.

General Bipin with his great strategic vision has left a spring board for his successors to operate from. It will be an uphill task for his successor to foot the bill and move smoothly into his shoes. Above all, Gen Bipin Rawat has been the longest serving uniformed man in the history of Indian Defence Forces and died in harness by being at the pinnacle of his career!