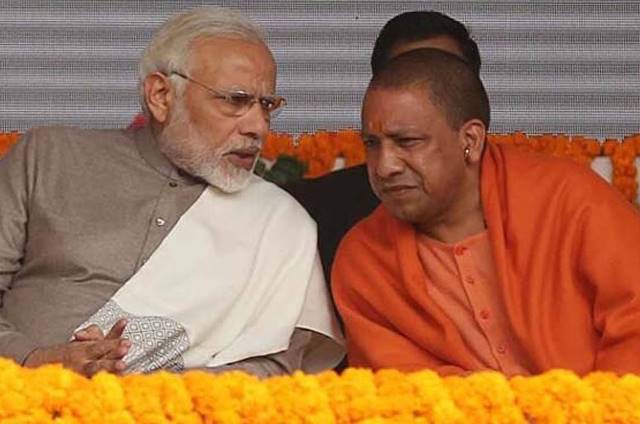 As the dance of democracy rolls on in Uttar Pradesh, it seems bad news has come to stay for the BJP, even as the assembly polls in the spring of 2022 might signal symbolic signs of which way the wind might blow in the Lok Sabha elections in 2024. Indeed, for both Yogi Adityanath and Narendra Modi, the writing on the wall is loud and clear, and, surely, achche din seem nowhere in sight for them, or the BJP.

The seasoned journalists who were predicting only a depletion of 100 seats for the BJP, have now come down to 150. Apparently, certain bureaucrats in the state are calling up Akhilesh Yadav, sensing the mood on the ground. A district magistrate in Western UP, reportedly, refused to order a repoll in certain booths in a constituency despite the ardent pleas of a BJP heavyweight. These are all markers blowing in the wind, like the chronicle of a tale foretold.

While his father remains entrenched in the Union cabinet, despite the angst and anger of the farmers, the release on bail of the principle accused in the Lakhimpur Kheri murder case, with crackers etc to welcome him, has sent waves of disgust and dismay across the rural landscape in the area. Modi’s rally out here therefore might not change the simmering mood on the ground.

Besides, old memories have come to haunt the BJP. The burning pyre of a young Dalit girl in Hathras, with the UP police barricading the site, is etched in the mind of the locals, especially the Dalits. She was brutally assaulted and raped, and her family was not allowed to be part of the funeral of their own daughter. The media was not allowed to report, and, opposition leaders like Rahul and Priyanka Gandhi were stopped at the Delhi-UP border. With massive protests and nation-wide outrage spreading all across, the Yogi regime was compelled to allow the media and politicians access to the mourning family.

Now, Dalits in and around Hathras, are determined to teach Yogi a lesson. Not only here, with Mayawati having disappeared from the scene, Dalits across UP are unhappy with the BJP. In Western UP, anyway, Dalits have consolidated themselves with their Jat and Muslim brothers, in the formidable SP-RLD electoral alliance. The BJP leaders are not even able to visit their own constituencies, or else they have to face the wrath of the farmers. The confluence of Har Har Mahadev and Allah-u-Akbar at the massive Muzaffarnagar rally in the recent past, has all but eliminated the Hindutva card. Polarisation and hate politics just cannot work in Western UP anymore.

There is a noticeable paradigm shift in terms of the dominant BJP narrative in UP. Gone is the belligerent aggression and the strident Hindutva overdrive. The divisive discourse is all but over because communal politics is just not selling anymore in the Hindi heartland.

People have long memories. Bad, sad, bitter memories have a long shelf life. The toxic taste of demonetisation and GST lingers in the back-lanes like ghost stories. The ravaged economic lives of the small-scale industry and petty traders stalk the by-lanes. There is mass unemployment and the economy has gone for a toss. People want development, a better life, food to eat, health and education, jobs for the young. Surely, they don’t want hate politics.

Poor people are not able to have two square meals a day. Poor mothers are eating one meal a day. Women seem to have disappeared from the unorganised work force. The pandemic and lockdown has taken its toll on the poor.

ALSO READ: ‘Why I Don’t Want Yogi To Be CM Again’

The Khatik community of Banda district in Bundelkhand, who backed the BJP in the past, are now terribly disappointed. Poor Khatiks who pick up sand since eternity, for a living, have to spend Rs 200 per day to feed their donkeys. From where will they get this kind of money? ‘‘Badlaav hoga,’’ (there will be change), said a woman to Chal Chitra Abhiyan, an independent news channel run by locals in Western UP.

In the village of Utarva in Banda, according to the news channel, Dalits want jobs. Doors have locks in this village because there is mass migration in search of livelihood. The nomadic community here, who voted for the BJP last time, will not toe the line anymore.

Talking of sand, the memories of the dead buried on the sandy shores of the Ganga, along with scores of dead bodies floating in the river, during the deadly Delta wave in the summer of 2021, haunts the people. People remember the dead cremated in public spaces and the hoardings put up hurriedly in Lucknow by the UP government to block photographers and journalists.

Plus, the memories of the anti-CAA protests have come back. The Supreme Court has recently ordered that the UP government should refund the damages worth crores recovered from the persons accused of destroying public property during the peaceful protests. Several activists, including women, were trapped in false cases.

Besides, the Brahmins, who can sense power from a distance, are waiting and watching. They will certainly vote for the winning alliance. In any case, bereft of political and bureaucratic power, they have been deeply disturbed by the unilateral power enjoyed by the Thakurs under the Yogi dispensation. Across UP, from Lucknow and Varanasi to Saharanpur and Meerut, the disgruntled Brahmin community might mark a decisive shift against the BJP in these assembly polls.

Political observers believe that at least 35 per cent of the BJP support base will shift this time. The backward caste vote base has all but aligned with the SP. Combined with the formidable Yadav-Muslim alliance, this seems a win-win scenario for Akhilesh Yadav. That heavyweights like Swamy Prasad Maurya, a powerful backward caste leader, four times minister with a daughter as MP, has aligned with Akhilesh, is a sign of the times. Like those bureaucrats, he too has sensed the shifting mood on the ground.

The Muslim factor too is crucial. Earlier, sidelining the Muslims, not pitching a single Muslim candidate, and ground level polarization would consolidate the Hindutva votes across the Hindu community. Now no more. This will lead to the Muslim community uniting as one against the BJP. With the backward castes, a section of Dalits and Brahmins too joining the Yadav alliance, the BJP is on a sticky wicket.

The ban on hijab in the schools of Karnataka has shocked the nation. Even BJP supporters can’t understand why school girls with backpacks, chasing dreams, should be unnecessarily targeted. There are reports that there is deep resentment within the BJP, including among Union cabinet ministers, against the move. The ban, which seemed a symbolic sign to polarize in UP, seemed to have boomeranged.

With schoolgirls from the Hindu, Christian and other communities, holding hands with the Muslim schoolmates in hijab, marching in solidarity, hand to hand, a new wave of unity in diversity has brought cheer to the nation. And this is the cheer and optimism which will be blowing in the wind in the state of UP in the spring of 2022. Resurrecting the chronicle of a tale foretold in the summer of 2022.