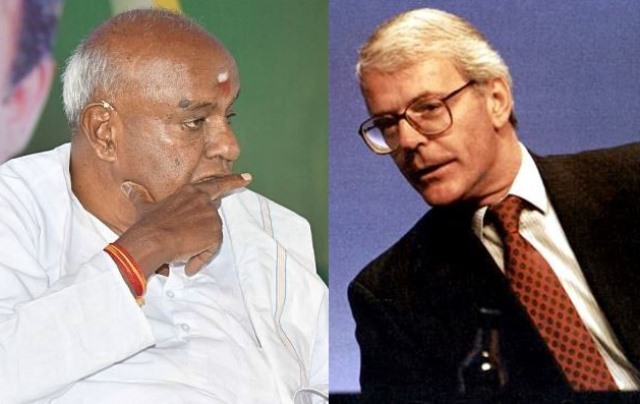 Heads of state and prime ministers often spend considerable time together during visits and international conferences, but few details of what transpires between them are released, beyond staged photo opportunities or press releases couched in platitudes and diplomatic language. There is an element of extra bonhomie during meetings of world leaders of similar ideologies compared to those between differing or opposing ideologies; for example, it was known that US President Ronald Reagan and British Prime Minister Margaret Thatcher shared an easier relationship while in office, or President Donald Trump and Indian Prime Minister Narendra Modi bonded well.

However, a rare peek into the interaction between two prime ministers of differing political persuasions is now available in recently released confidential documents by National Archives. It relates to the week-long visit to India in January 1997 of Prime Minister John Major (Conservative), when H D Deve Gowda was heading an uneasy coalition of 13 partners in the United Front government. A three-page document from Downing Street set out details as recounted by Major when he, wife Norma Major and Deve Gowda were the only ones present during a 150-minute flight from Kolkata to Bengaluru; no officials were around to take notes

At the time, the United Front government was under considerable strain from inside and outside the coalition, which was reflected in Deve Gowda’s remarks to Major. Described as a “virtually unprecedented degree of access”, the note based on details reported by Major and written by John Holmes in Downing Street to Fiona Mylchreest in the Foreign Office says that Deve Gowda “went out of his way to speak frankly to the Prime Minister, for example about internal difficulties”.

ALSO READ: Resurrecting Menon And His Many Lives

The note says that Deve Gowda and his finance minister P Chidambaram did not always see “eye to eye”, telling Major that Chidambaram was “very good” in the world of finance, but was not inclined to prioritise the problems of rural India, adding that there were “significant strains” within the coalition, explaining how difficult and constraining it was to manage 13 parties.

According to the note, “He (Deve Gowda) told the Prime Minister…Chidambaram was very good but his skills lay in the world of finance and big city life. He was not inclined to give sufficient priority to the problems of rural India”. It adds that he “went on to say that he was very concerned about the future of rural India, and in particular about Indian agriculture…It was clear to the Prime Minister that the way to Deve Gowda’s heart was through extra help for agriculture, for example training, new techniques and assistance of any kind”.

Deve Gowda, who was prime minister between June 1996 and April 1997, went on to make two political claims that were proved wrong in subsequent elections: the note says that he believed at the time that the Congress had been “permanently fractured” and that the Bharatiya Janata Party (BJP) was “unelectable”.

The note says: “Deve Gowda began with the Indian political scene…He believed that the Congress Party was now permanently fractured and that in the post-dynastic era of Indian politics (he was particularly scathing about the dynasty phenomenon) they could not regroup. The Party was too corrupt and their time had passed. Meanwhile the BJP was unelectable”.

The Congress-led United Progressive Alliance went on to win two successive elections in 2004 and 2009, while the BJP formed two governments under Atal Bihari Vajpayee and later won majorities in 2014 and 2019. The declassified note suggests that Deve Gowda developed a rapport with Major, who faced a general election back home in May 1997.

At a reception in Bengaluru, the note says: “(Deve) Gowda surprised everyone by calling for silence as the Prime Minister was leaving and saying that he was sure everyone present shared his desire to see the Prime Minister win the election (greeted by a round of applause).”

The note adds: “The Prime Minister believes that he has established an excellent personal relationship with (Deve) Gowda, who pressed him and Mrs Major to return to India whenever they wanted, preferably soon. It was noteworthy that Gowda not only came to the reception in Bangalore, but also insisted on coming to see the Prime Minister off, although Indian protocol had insisted beforehand that he could not possibly do either of these things”.