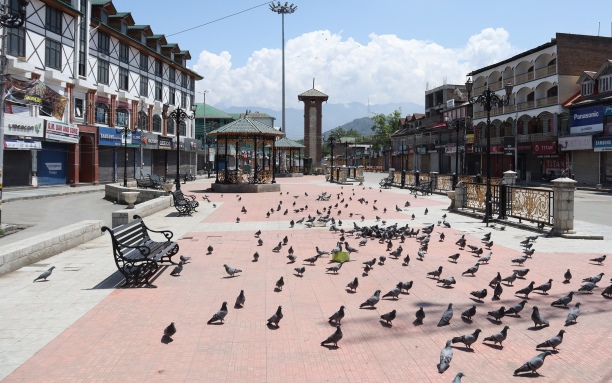 In northern Afghanistan, as an unrepentant Taliban captures territory, even while so-called peace talks are underway, reporters are entering the tattered make-shift tents of the refugee camps without water, electricity and food, scattered across the hinterland, in about 50 degree Centigrade, with a scorching Afghan sun shining on the stoic masses. Desperate people are once again running to save their body and soul, and women are telling terrible stories which they have not yet forgotten. The terrible stories narrate emotional degradation and sexual slavery under the Taliban before 9/11, like a thousand terrible suns.

The untold stories of women, mothers, daughters, girls and boys, and homes destroyed – they are often the time-tested testimonies of a society under siege. Surely, Kashmir is not Afghanistan, and the Taliban is still far away. But, somehow, its shadow seems to be looming large in the Valley too, as the Americans leave, and the uncertain landscape changes colour into a murky grey, across the line of control.

Experts are therefore reading between the lines as the muscular Modi-Shah regime made its first strategic U-turn recently on Kashmir by inviting its top leaders for talks in Delhi. So, what is brewing?

It’s been two years since the massive military clampdown was imposed on Kashmir on August 4, 2019, with the arbitrary abrogation of Article 370, the dismantling of the state assembly, the arrest of all top political leaders, including three former chief ministers, and hundreds of innocent citizens accompanied by an atmosphere of total terror. The entire Valley was under siege. There were armed barricades across the nooks and corners of a desolate Srinagar, its sublime Dal Lake bereft of a single tourist boat.

Apart from the crippling economic losses which ran into billions, and some businessmen behind bars, what was striking on the empty streets and markets of Srinagar was the absence of women and children. A silent stasis of suppressed mass trauma and alienation had penetrated the deepest layers of Kashmiri society.

At the famous Hazratbal and Jama Masjid, there was nobody to feed the pigeons. The legendary Lal Chowk was steeped in solitude except for the armed barricades. University campuses had their huge gates shut. An uncanny unhappiness stalked this scenic land.

Mothers and children had withdrawn into their homes. There were no kids out there flying kites or playing cricket on the streets; no one was going to school with their back-packs. It was like the Joan Baez song: Where have all the children gone?

Mothers were not walking out with their children asking them to buy ice-cream or popcorn. Sisters were not playing pranks with their little brothers in open spaces. Children were not playing in the courtyards just across the tense army barricades every few minutes; they were not exchanging notes across the rows of terraces touching each other in old Srinagar with its myriad mappings of inner lanes crisscrossing the inner city.

Windows and doors were tightly shut, internet was shut, the media was shut, lips were shut, hearts were shut, eyes were shut wide-open; this was a ‘shutdown’ much before the sudden ‘lockdown’ in the rest of India in March 2020. This was armed occupation, under army jackboots. This was forced social quarantine. This was a total denial of democracy and fundamental rights as enshrined in the Indian Constitution.

So what do we say of a beautiful city where there are no sounds of children anymore? Where children do not play anymore?

What do you say of a State which shuts its own children into silence, condemnation and exile? For a reporter in Srinagar two years ago, the wounded memories are etched.

Two years later, there seems to be a tangible and tangential linkage between what is happening in Afghanistan, and the sudden and unexpected ‘big move’ being played out recently by the super-duo in the capital.  They, surprisingly and ironically, invited the mainstream political leadership of Kashmir for ‘talks’ in Delhi. Many of these leaders were put in detention by them for prolonged periods after the clampdown; they were called the ‘Gupkar Gang’ by Amit Shah after their release.

This refers to the formation of the People’s Alliance for Gupkar Declaration (PAGD) by political parties in Jammu and Kashmir, after the release of their top leaders. Mr. Shah had tweeted, “The Gupkar Gang is going global! They want foreign forces to intervene in Jammu and Kashmir. The Gupkar Gang also insults India’s Tricolour. Do Sonia Ji and Rahul Ji support such moves of the Gupkar Gang? They should make their stand crystal clear to the people of India.”

In response, former chief minister Mehbooba Mufti, who had earlier made a government in alliance with the BJP in Srinagar, said, “Love jihad, tukde tukde and now Gupkar Gang, dominates the political discourse instead of rising unemployment and inflation.”

“I can understand the frustration behind this attack by the Home Minister. He had been briefed that the People’s Alliance was preparing to boycott elections. This would have allowed the BJP and newly formed king’s party a free run in J&K. We didn’t oblige them,” said another former chief minister, Omar Abdullah.  “The truth is all those who oppose the ideology of the BJP are labelled ‘corrupt and anti-national,” he said. “We are not a ‘gang’ Amit Shahji, we are a legitimate political alliance having fought and continuing to fight elections, much to your disappointment.”

According to the ‘Ninth Report of the Concerned Citizens’ Group on Jammu & Kashmir’ (July 5 -7, 2021), brought out by Air Vice Marshal (Retired) Kapil Kak, former Union minister Yashwant Sinha, senior journalist Bharat Bhushan, among others, there is abject alienation across Kashmir. The report says: “What upset the businessmen most was that some of them were arrested and jailed after the Centre’s policy change in J&K in 2019. ‘Political leaders were arrested but why us? Why were businessmen taken into custody? I am very angry with India. You say there are only about 200 militants in Kashmir and yet you punish all of us for that,’ a business leader complained. He felt that instead of calling political parties from J&K to Delhi, ‘the government ought to invite businessmen, traders and horticulturists to discuss our issues directly with us.’”

According to the report: “A social worker from Pulwama claimed that youth was being pushed towards militancy because of the harassment faced by people at the hands of the army personnel. There are no jobs for the young. ‘They have only two options before them – militancy or committing suicide,’ he said, pointing to a spate of suicides by youngsters in the Valley.”

Surely, in this zero sum game scenario, it is advantage zero on all sides. After two years of a crackdown, all that remains is a cracked mirror. Clearly, the Modi-Shah double whammy is starker in Kashmir, than a thousand terrible suns!