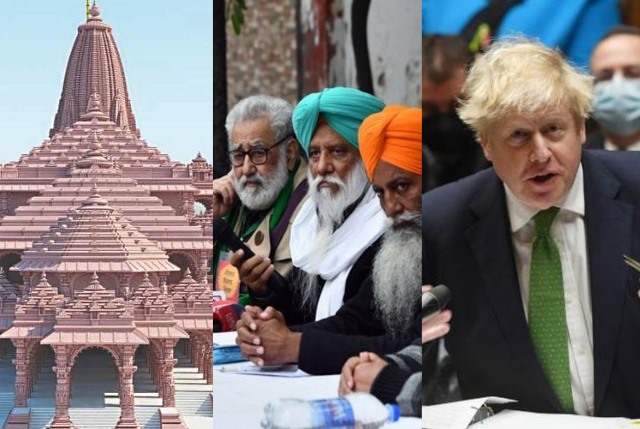 UP Elections: GDM Not GDP Growth

Asaduddin Owaisi, the leader of AIMIM has accused both BJP leader Yogi Adityanath and the SP leader Yadav of competing to be ‘greater Hindu’ ahead of the UP elections. Both Yogiji and Yadav ji have been trying to convince voters that they will build bigger Mandirs and are the real protectors of Hinduism. Yogi of course uses the Babri Masjid-Ayodhya claims to fame. To out do him, Yadav has inaugurated a Lord Parshuram Mandir in Lucknow on the banks of Purvanchal Expressway.

The temple was built by UP’s Samajwadi Party leader Santosh Panday. Not to be outdone, BJP responded the next day with its Deputy Chief Minister of UP, Brijesh Pathak, unveiling the statue of Lord Parshuram at the Hasoveer Temple.

Temple politics is big in this largest of Indian states. The BJP took lead when its ‘base’ the RSS demolished Babri Masjid and started building Ram Janam Bhoomi temple in Ayodhya with the  Indian Prime Minister, Narendra Modi having laid the main foundation stone on 5th August 2020.

Meanwhile BJP has made rebuilding Mathura along the lines of Ayodhya as one of its key manifesto pledges.  While Yadav has refrained from attacking Muslims in UP, Yogi Adityanath has not been shy of this. The BJP has been branding Akhilesh Yadav as pro Muslim and Yogi has been raking up history of firing on karsewaks in the 1990s by the regime of Yadav’s father, Mulayam Singh Yadav, when he was CM.

Owaisi, the leader of All India Majlis-e-Ittehadul Musalimeen, was quick to pick this up and made the rhetorical statement that both Yadav and Yogi are in competition about who is a greater Hindu. It’s a tough one coming from a man who has been competing to become the greatest Muslim and therefor represent Muslims in India.

Unemployment, price rises, farmer’s issues, polarisation and development all seem to be taking a bit of a back seat. UP is famous for caste politics but the smaller caste groups seem to be engulfed by Uttar Pradesh obsession with GDM, that is Gross Domestic Mandirs than GDP, Gross Domestic Product index.

At this rate the main competition between states in future may not be who feeds the most mouths, has best education system or most peaceful state, but which state has the most mandirs. One for budding economists to watch and make a name.

The Samyukta Kisan Morcha has sent a memorandum to the President of India charging that the Kisans have been betrayed by the Government that had given assurances on six outstanding issues. The Morcha leaders, the ones still left standing after some have gone on to fight elections in Punjab, feel a bit let down by Modiji.

Why they expected the assurances to be kept is a wonder. Before he became Prime Minister, Modi had promised gravity defying promises. They included creating 2,00,00,000 jobs a year, a shelter for everyone and bring back black money. Every Indian was to get ₹15 lakh in their bank account. Farmers’ income were going to double.

So far, a few lakh jobs have materialised since 2014, somewhere in lakhs rather than crores. Shelter is still nature’s blue sky interrupted by smog over many heads. And bank accounts have yet to start being fed any proper money. Black money is nestling where it is and grown with interest and further investments. Modi’s policies made farmers saw a threat to their meagre income and they decided to protest.

A committee to ensure MSP was to be formed. However no committee has yet even been contemplated let alone formed.

Moreover, the Government is moving ahead with the Free Trade Agreement with Australia that will threaten the existence of dairy farmers.

Modi has a history. In 2015, he gave a promise to the Sikhs in London that all political prisoners will be released immediately. Seven years later, quite a few still remain in prisons, waiting for this state government or that state government to finish its paper work.

Paper work is one of India’s great political tool. In the age of internet and online Adhaar Card technology, the bureaucrats can still bring anything to stone-age speed with ‘paper work’.

Yet despite all broken promises, Prime Minister Modi has maintained his popularity. It is an art, a gift, that has served the BJP well. It is what brought the Kisan Morcha to end. He has made the promise, but keeping that is for another ‘yug’, if that ever comes around. Yugs are in millions of years.

The Farmer leaders have splintered. The morcha got the laws repealed. Yet like one of those horror movies where the undead arise again, the laws are likely to come back in another form. One can sympathise with the farmers and hope this time the Modi Government will actually keep its promises. They live in hope –aas.

Theatre At Mother Of Parliaments

One of the interesting facet of the international community of States is that there is always some leader some where providing enough eccentric or maverick behaviour to keep the headlines running, journalists in jobs and the world entertained. From Berlusconi’s Bunga Bunga parties, Kim Jung Un’s pointless Missiles hitting whales in Oceans and Trump’s anti vax tirades, the world has some leader somewhere hogging the media. Now it is Britain’s Boris Johnson who is providing the political entertainment.

Britain’s Prime Minister, Boris Johnson, is a man who likes reckless challenges. During Covid lockdowns when he was going on TV to tell the rest of Britons to stay at home, not to visit relatives or friends, not to have any parties etc, he was busy doing precisely the opposite. There were parties galore at 10 Downing Street.

Caught out or rather outed by his ex-advisor Dominic Cummings, Johnson faced a huge backlash in the media and from MPs from his own party, the Conservatives. But Britain is old hand at managing accusations, a trick learnt by Indian Government too. It set an enquiry or a committee.

The first person to lead the enquiry had also been involved in a party. So he was replaced by another civil servant called Sue Gray. She has finished her enquiry but the British Police, more precisely Scotland Yard, whose Chief owes her continuing job to Johnson Government, has delayed publication by saying it has to ‘investigate’ some of the law breaking. Police investigations, as anyone knows, can also by Jugo Yug (eternal)

Meanwhile the people, now used to Instagram attention spans, are getting fed up with the delays and want to move on. That is what is happening.

Johnson has been given a lifeline by Putin. Putin has amassed forces at the borders of Ukraine. Johnson knows that Brits like wars or pretend they are still a world force to be reckoned with. So Johnson now bellows threats at Putin. Putin must be amused at these juvenile threats and has even given an audience to Johnson to add to the charade of Britain’s comic Global British Power.

In the meantime, the mother of Parliaments, Westminster, seems to be in a state of ethical dementia as MPs from Conservative party up hold the ‘highest’ standards by admitting openly that their leader is a pathological liar but they are still examining whether there are grounds to  remove him!