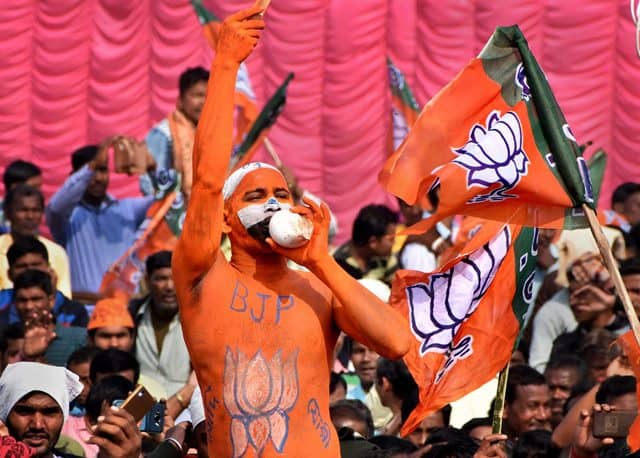 While a lot can change in the course of a prolonged campaign, but as of today, the BJP enjoys a clear edge over its opponents

As political parties in India hit the campaign trail for next month’s Lok Sabha elections, the ruling Bharatiya Janata Party looks to be ahead of its rivals, who are still struggling to put up a united front or come up with an effective and credible narrative to take on the saffron party.

To begin with, the BJP has entered the race with a clear advantage after it emerged as the central pole of Indian polity following its incredible win in the last general election and the subsequent string of victories it notched up in state assemblies.

This has set the stage for a “BJP vs others” battle.

Undeniably, the election has just got underway and a lot can change in the course of the prolonged campaign, but as of today, the BJP enjoys a clear edge over its opponents. Five factors are working in favor of the saffron party: strong leadership, an effective narrative, a well-oiled party organization, a killer instinct and the alacrity with which it placated its angry allies. Of course, the BJP is also helped by the fact that it faces a fragmented opposition with no clear single leader.

The BJP’s biggest asset is Prime Minister Narendra Modi. As in the case of Gujarat assembly polls and the 2014 Lok Sabha election, the coming electoral contest is all about Modi. The BJP and its candidates contesting elections are secondary as Modi has succeeded in converting India’s Parliamentary polls into a Presidential-style contest.

Modi’s projection and acceptance as a strong, decisive leader have strengthened the public perception that no one in the opposition camp can match up to him. The Pulwama terror attack and the Balakot air strikes have enhanced the aura surrounding Modi who is being publicized as the only leader who can be trusted to give primacy to India’s national security.

Modi swept the last election with the promise of “ache din” to the electorate which was mesmerized both by his powerful oratory and his Gujarat model of development. Last time he went to the people as a challenger while in this election he is approaching them an incumbent, having been in power for five years. But, it is to his credit, that he has managed to stave off the burden of anti-incumbency despite the fact that the country is faced with a faltering economy, high unemployment, and an agrarian crisis. As a political observer rightly pointed out, people are disenchanted with Modi for not delivering on his election promises but there is no anger against him. People are willing to give him another chance on the plea that it is not possible to meet all commitments in five years.

If Modi’s leadership is working to the BJP’s advantage, the party’s firm grip on the political narrative is also helping it to set the agenda in this election. There is no doubt that before the Pulwama attack and India’s retaliatory strike against Pakistan, the Modi government had looked shaky. The BJP was on the back foot after its governments were ousted by the Congress last December in the Hindi heartland states of Rajasthan, Madhya Pradesh and Chhattisgarh as the elections here were dominated by livelihood issues like joblessness and farmers’ woes. This was seen as a direct indictment of the Modi government’s policies. For once, it appeared that the BJP and Modi had been successfully pushed on the defensive.

But Pulwama and Balakot altered the political landscape in BJP’s favor. The party and the Modi got an opportunity to showcase their credentials as hawks on national security. Both lost no time in unleashing its nationalist agenda wherein anybody questioning the government on intelligence lapses in Pulwama or challenging BJP president Amit Shah’s claims on the body count in Balakot, were immediately dubbed “anti-national”.  While the opposition was left with little option but to support the government, Modi, Shah, and the BJP’s foot soldiers fanned out across the country to push their nationalist agenda. The Congress has since tried to change the narrative with the promise of a minimum income benefit scheme for the poor but there are few takers for it as jingoism and patriotism are clearly the flavors of the season.

Strong leadership and a powerful narrative may have given the BJP an edge but it is not taking any chances. Its party president Amit Shah, like Modi, is a 24/7 politician who has a firm grip on the organization and keeps the rank and file on a tight leash. He proved his mettle in 2014 as Uttar Pradesh in charge when the party swept the polls. Shah has acquired a reputation for micro-management thus ensuring that the party organization is always battle-ready.

Both Shah and Modi have a killer instinct and are not known to balk when faced with a challenge. They are also willing to walk the extra mile in their quest to retain power. Shah demonstrated this in his handling of the BJP’s demanding allies like the Shiv Sena, the Shiromani Akali and the Janata Dal (U). The BJP president did not hesitate to accommodate their demands by conceding to them in seat-sharing negotiations. The allies have since all fallen in line. Similarly, Shah also managed to persuade smaller allies like the Asom Gana Parishad to return to the BJP-Led National Democratic Alliance even though it had walked out in protest over the Citizenship Rights Bill. Showing a streak of pragmatism, the Modi government chose to go slow on this contentious legislation, which gives citizenship to Hindus from Bangladesh, Pakistan and Bhutan, even though this legislation is in line with the ideology of the BJP’s mentor, the Rashtriya Swayamsevak Sangh. This Bill led to strong protests in the entire North-East region but the controversial legislation is all but forgotten as the BJP thought it better to put in cold storage when it realized it was derailing its mission to take control of this region once dominated by the Congress.