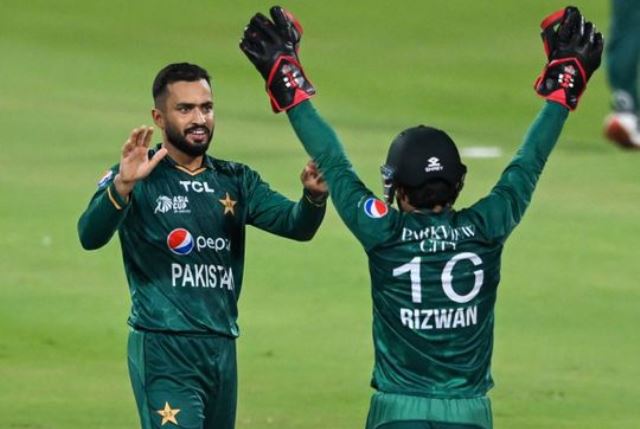 Team India is out of contention for final as Naseem Shah’s two back-to-back sixes in the first two balls off the final over undid brilliant bowling by Afghanistan throughout the innings, securing a one-wicket win for Pakistan in a thrilling Super Four clash at the ongoing Asia Cup 2022 on Wednesday.

Afghanistan has been shown the exit door but they would be extremely happy with brilliant bowling from Fazalhaq Farooqi (3/31) and Fareed Ahmad Malik (3/31) despite posting just 129/6 on the board. They almost took their side towards a win but Naseem’s two sixes in the last over sealed a win for Pakistan.

Iftikhar Ahmed (30) and Shadab Khan (36) posted valuable contributions for Pakistan. A final between Sri Lanka and Pakistan is set.

Chasing 130, Pakistan was off to a poor start as they lost their skipper Babar Azam for a golden duck. Azam’s horrific run in the tournament continued and he became the first skipper in Asia Cup history to have a golden duck registered to his name.

Another wicket fell soon for Pakistan as left-hander Fakhar Zaman was run out by Najibullah Zadran for 5, reducing Pakistan to 18/2.

After this Mohammed Rizwan and Iftikhar Ahmed rebuild the innings for Pakistan and kept the scoreboard moving with their good running between the wickets. At the end of six overs, Pakistan was at 35/2, with Iftikhar Ahmed (13) and Mohammad Rizwan (15).

Rashid Khan gave Afghanistan their third wicket of the match and his first, trapping Rizwan lbw for 20 off 26 balls. Pakistan was left reeling at 45/3.

Ifthikhar Ahmed carried on while Shadab Khan joined him on the crease. At the end of 10 overs, Pakistan was at 52/3, with Shadab (6) and Iftikhar (19).

Shadab and Iftikhar continued to bat, playing some sensible cricket and sending bad balls out of the fence. They brought Pakistan back into the contest.

A 42-run stand developed between two, which ended after Iftikhar was dismissed for 30 off 32 balls. Fareed Ahmad got the wicket after Ibrahim Zadran caught him at deep-midwicket. Pakistan was now at 87/4 in 15.3 overs.

All-rounder Mohammad Nawaz was the next on the crease. Heading into the final four overs, Pakistan needed 39 runs.

Shadab started the next over bowled by Rashid with a huge six, only to be dismissed by him on the very next ball for 36 runs off 26 balls after he was caught by Azmatullah. Half of the Pakistan team was back in the hut at 97 runs.

Asif Ali was the next batter to join Nawaz and he started his innings with a six. Pakistan needed 25 off the final three overs at this point.

Afghanistan continued their brilliant fight back in the match, with Fazalhaq Farooqi trapping Nawaz leg before wicket for four off five balls. Pakistan was at 105/6. Farooqi continued to build pressure on Pakistan with his superb bowling, cleaning up new batter Khusdil Shah’s stumps in the final ball of the over. At the end of 18 overs, Pakistan needed 21 in the final two overs.

Haris Rauf was up next for Pakistan. But he was clean bowled by Fareed Ahmad for a duck, who got his second wicket in the match.

Naseem Shah was next to join Asif, who was running out of partners at the other end. Fareed Ahmad got his third wicket of the match after he dismissed the dangerman, Asif Ali for 16 off 8 balls after he was caught by Karim Janat.

Mohammad Hasnain was the last man to turn up for Pakistan on the crease, with his side needing 11 in the final over.

Naseem Shah started the next over with a huge six, reducing the deficit to five runs needed off five balls. He also hit the next ball, a full toss for a six, securing a one-wicket win for his country.

Earlier, brilliant bowling by the Pakistan unit restricted Afghanistan to a subpar 129/6 in their 20 overs in their Super Four clash at the ongoing Asia Cup 2022 in Sharjah on Wednesday.

Pakistan had a nice outing with the ball as they did not let any big partnerships develop. Afghanistan would not be happy at all with the show put on by their batters except Ibrahim Zadran (35) to an extent as none of them capitalised on the good starts they got.

Haris Rauf was the pick of the bowlers for Pakistan with 2/26.

Put to bat first by Pakistan, Afghanistan openers Hazratullah Zazai and Rahmanullah Gurbaz put their team to a solid start. Both batters adopted an attacking approach suited for the powerplay. Gurbaz hit pacer Mohammad Hasnain for two consecutive sixes in the second over.

Pacer Haris Rauf gave Pakistan their first breakthrough. He dismissed the danger-man Gurbaz for 17 off 11 balls. Gurbaz attempted to slog the ball, but his off-stump was dislodged before he could.

Ibrahim Zadran was next up on the crease. Soon, Hazratullah Zazai was dismissed by Hasnain for 21 off 17 balls. He had struck four solid boundaries and looked really good, but Hasnain removed his leg-stump. Afghanistan lost their second wicket at 43-runs before powerplay.

Karim Janat was next up on the crease. At the end of the power-play in six overs, Afghanistan was at 48/2, with Zadran (5) and Janat (2). Two early wickets had lowered Afghanistan’s run flow and the challenge was to complete the first half of their innings with a solid score.

Janat and Zadran helped their side do just that as they kept the scoreboard running with some singles and boundaries. At the end of 10 overs, Afghanistan was at 72/2 in 10 overs, with Janat (15) and Zadran (16).

A promising stand ended prematurely at 35 runs when Janat tried to hit big over long-on but was caught by Fakhar Zaman. Janat was back in the hut for 15 off 19 balls and spinner Mohammad Nawaz got his first wicket. Afghanistan was 78/3 at this point.

Najibullah Zadran was next up, joining the other Zadran. Najibullah tried to dominate spinner Shadab Khan in the 14th over with a six, but the bowler got the best of him as the batter had to walk back for 10 off 11 balls after Fakhar took another catch.

Skipper Mohammad Nabi was also dismissed at the very next ball. Pacer Naseem Shah got his first wicket of the match. The ball touched the inside edge of his bat and went straight into his stumps. Half of Afghanistan was back in the pavilion by 91/5.

Azmatullah Omarzai joined Ibrahim on the crease. A six by Ibrahim helped Afghanistan cross the 100-run mark in 15.3 overs.

Zadran looked highly important for Afghanistan’s chances heading into death overs, but he was dismissed for 35 off 37 balls by Rauf after he was caught behind by Mohammad Rizwan.

Rashid Khan was next up to the crease. Pakistan continued to build pressure on Afghanistan batters and did not give them much opportunities to score runs. Rashid Khan did reduce some pressure with a four and six in the final over, but still, Afghanistan ended with a subpar score of 129/6 in their 20 overs. Rashid Khan played a solid cameo of 18* off 15 balls and Azmatullah Omarzai ended with 10*.

Pacer Haris Rauf was the leading bowler for Pakistan with a spell of 2/26 in four overs. Naseem Shah, Mohammad Hasnain, Mohammad Nawaz, Shadab Khan also took one wicket each for Pakistan. (ANI)