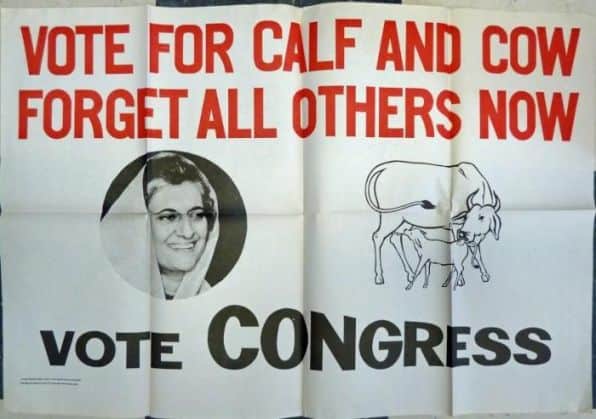 Slogans are the essence of an election campaign as they project personalities and issues. In throes of its 17th Lok Sabha elections, India votes for those that carry a balance of wit and sarcasm.

Simple, black-and-white posters with the slogan “YOU can defeat S K Patil,” appeared in the summer of 1966, inviting voters of South Bombay, India’s principal hub of businesses and corporate headquarters. Trade unionist George Fernandes was challenging a powerful man of the rich. He won the “David vs. Goliath” contest and became “George, the Giant Killer”.

Slogans are the essence of an election campaign as they pithily project personalities and issues. Now in throes of its 17th polls, India votes for those that carry a balance of wit and sarcasm.

Meant to capture imagination of the masses, the slogans aim to be everything to everybody. It is difficult to impact a billion-plus people of varying age and income groups, of different faiths and castes.

No wonder, for the best of ideas to emerge, millions are spent in conceptualizing, then pushing them. It’s serious business for the parties as well as the advertising and PR firms. Who is engaging whom and the campaign content and strategy are kept secret.

The first general election in 1952 had “self-reliance” as its slogan, reflecting aspirations of a newly-independent nation, bearing Jawaharlal Nehru’s signature. For the next (1957), it was industry, the “temples of modern India.” The focus in 1962 was on India’s place in the comity of nations. All along his Congress party’s symbol was a pair of bullocks, symbolizing the farming India.

Change came post-Nehru, in 1967. Considered weak, Indira Gandhi found competition from the political right and the left. Bharatiya Jana Sangh, earlier avatar of the Bharatiya Janata Party (BJP) sought to take its thunder away with the slogan “Har haath mein kaam, har khet mein paani” (job for every hand, water for every farm), both lighted by ‘diya’ (lamp). Its party symbol underscored this reality even as the country was getting electrified, urbanized and industrialized.

Congress projected itself as the face of development with Progress through Congress campaign in the 1960s. But he Left, of varying hues, challenged it. Socialist Fernandes and Communist party of India (CPI) chief S A Dange were among then Bombay’s opposition candidates. A telling wall painting asked the people, reversing the Congress slogan, to choose between “Congress Or Progress.”

With that election, the Congress’ preeminence ended and that also ended the era of innocence, if there was one.  “Vote for calf and cow, forget all others now” became the Congress symbol after it split and lost the pair-of-bullocks symbol. Critics mocked at its quasi-religious touch and likened the new pair to Indira and younger son Sanjay.

The opposition said she actually wanted “Garib Hatao” — banish the poor. But “Garibi Hatao” worked, and to date remains the most effective slogan ever coined in India.

But when she announced snap elections again in 1977, after 19 months of internal emergency with media gagged and the opposition leaders jailed, Jaiprakash Narayan coined the slogan “Indira Hatao, Desh Bachao.” People heeded him.

The most emotive slogan came after her assassination in 1984. Jab tak sooraj chand rahega, Indira tera naam rahega (your name will endure like sun and moon). The sympathy it generated caused a landslide victory of the Congress.

By the end of the 1980s, India was in throes of a movement to build a Ram temple in Ayodhya city where 16th century Babri Mosque once stood. The BJP and its affiliates’ slogan for the 1991 polls was “Bachcha bachcha Ram ka, Janmabhoomi ke kaam ka”. But in a repeat of 1984, the Congress gained sympathy after Rajiv Gandhi was assassinated.

It is significant to recall it because the two otherwise competing parties have again forged what seems the most potent alliance to defeat BJP.

Vajpayee did get his turn and ruled for six years. But in 2004, he lost in an election advanced by over-confidence amidst “India Shining” slogan. In many ways, Congress President Sonia Gandhi was its architect. The slogan in 2009 was “Sonia nahi yeh aandhi hai, doosri Indira Gandhi hai”.   It worked. Five years later, a listless party, without a worthwhile slogan, touched its nadir in 2014. Now, the mantle has fallen on daughter Priyanka,who resembles her granny.

In 2004, seeking a comeback, the Congress party targeted “aam aadmi”, India’s growing middle-class population. Ironically, it has since been hijacked by one of the key drivers – and beneficiaries — of the anti-graft movement that targeted the Congress. Aam Aadmi Party chief Arvind Kejriwal rules Delhi.

Sadly, this year there is more of name-calling than slogans to galvanize the conducting of an election campaign on issues. The current toxic discourse many jibes hit below the belt. A mix of personal and political malice, they don’t even qualify as slogans.

The Election Commission of India and its state-level offices ignore the good and the bad ones, and curb the ugly ones. Often, by the time they act, the damage is done.

India has been witnessing a sustained campaign in recent years, with or without elections taking place, transcending political and ideological differences, to malign and belittle opponents.

Amidst demonization of the Nehru-Gandhi ‘dynasty’, Sonia Gandhi can never leave behind her Italian birth and her son Rahul remains ‘pappu’, a simpleton. The latest is ‘pappi’, for sister Priyanka.

The Congress responds by launching personal attacks on Prime Minister Narendra Modi. It is necessary to condemn all those muddying polls discourse. But one comes across justification in the way other leaders across the world behave, especially US President Donald Trump who trashes critics, especially women. Who will work for this “climate change” and cleanse the world?

Un-related to elections, Rahul’s “Suit Boot ki Sarkar” attacking Modi’s sartorial taste had hit the bull’s eye. But the polls campaign so far has not thrown up a positive Congress slogan. That task seems to have been conceded to Modi and the opposition slogans are almost entirely reactive.

Projecting India’s security as supreme, Modi has called himself the ‘chowkidar’ guarding the nation — on the border with Pakistan (China does not figure, though), and within the country from the corrupt and the “anti-nationals” (read all critics). This has been met with sharp rebuttal by the opposition that accuses Modi and his government of corruption, mainly in the Rafale aircraft deal, favouring select business houses, saying “chowkidar chor hai” (the guard is a thief). This is tit-for-tat, perhaps born out of years of Rahul’s belittling.

Modi has sought to turn this charge to advantage by reinforcing it with “main bhi chowkidar hoon.” Now, his ministers and party leaders are using this as a prefix, a badge of honour. Many acolytes on the social media have followed suite. This has no known precedence.

Among others, Bihar Chief Minister Nitish Kumar’s campaign, also personalized, calls him “Aaccha hai, Sachha hai, Chalo Nitish Ke Saath Chalein.” Its rival Rashtriya Janata Dal is shying away, since its supremo Lalu Prasad is in jail. It has opted for “berozgari hatao, arakshan badhao”, focusing on jobs and reservation.

In 2014, BJP appealed in Modi’s name: Ab ki Baar Modi Sarkar. This time over, it is again in his name:“Modi Hai toh Mumqin hai” (With Modi, it is possible to achieve). ‘Chaiwala’, the humble tea-vendor has yielded place to “chowkidar.”

“Your Chowkidar is standing firm and serving the nation. But, I am not alone. Today, every Indian is saying-#MainBhiChowkidar.”  The target is 400 seats out of 543: “Abki baar 400 ke paar”.

Two months from now we will know if the gatekeeper gets fresh mandate or some other(s) gate-crash.

The writer can be contacted mahendraved07@gmail.com