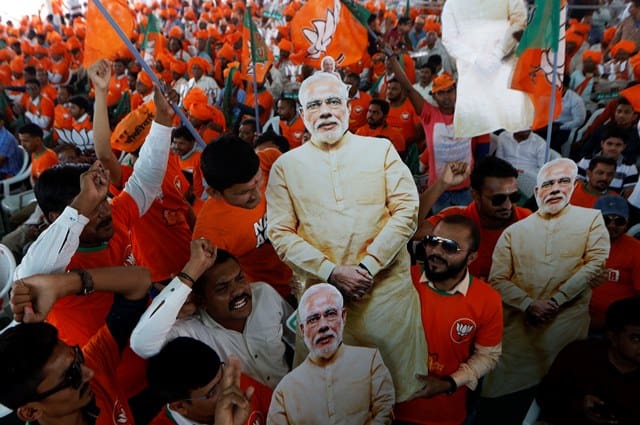 The BJP tally in Uttar Pradesh, Maharashtra, Bihar, Madhya Pradesh, Gujarat and Rajasthan will decide how it fares in 2019 Lok Sabha elections

Plumb in the middle of India’s seven-phase mega national elections, the prevailing mood is one that is marked palpably by confusion. India’s elections have often proved to be notoriously unpredictable. The tsunami-like wave that Mr Narendra Modi rode on to win in 2014 had taken everyone—including the most seasoned Indian psephologists—completely by surprise. It isn’t different this time. No one appears to have a clue. Journalists scouring the length and breadth of the country report widely divergent readings of the mood of India’s 820-million strong voters. Some say Prime Minister Modi’s party, the Bharatiya Janata Party (BJP) could return to power, albeit with less than the overwhelming majority it won last time (in 2014, the BJP won 282 of 543 seats; and along with its allies, its tally was 336). Others say the people’s verdict could result in an indecisive outcome with the united opposition, led by the Congress, eating into the BJP’s vote shares.

There are six states though that could decide the fate of the BJP: Uttar Pradesh, which has the highest number of parliamentary seats (80); Maharashtra (48), Bihar (40), Madhya Pradesh (29), Gujarat (26), and Rajasthan (25). That makes for a total of 248 seats; in 2014, the BJP won 194 of them. In other states with a large number of parliamentary constituencies, such as Bengal (42), and Andhra Pradesh and Telangana (which together have 42), and the three southern states of Tamil Nadu, Kerala and Karnataka (which together account for 87 seats), the BJP’s footprint is still weak and it will have to depend on the electoral strength of its allies in order to add to the National Democratic Alliance coalition that it leads. Moreover, in some of these states, the regional parties (viz. the Trinamool Congress in Bengal; and the AIADMK and DMK in Tamil Nadu) hold sway with the national parties, BJP and Congress, having much less sway among voters.

So, much of how the BJP fares in the ongoing elections will depend on how many seats it gets to win in the six states that powered its victory in 2014. In three of them—UP, Maharashtra, and Bihar—where the BJP won handsomely in 2014, this time around it faces a stiff fight. In Uttar Pradesh, the two regional parties, the Samajwadi Party (SP) and the Bahujan Samaj Party (BSP), usually daggers drawn, have forged a surprise alliance to fight against the BJP.

In Bihar, the Congress, which got battered in the 2014 national elections (it got a total of 44 seats), has tied up with the Rashtriya Janata Dal (RJD). In Maharashtra, where the BJP has an alliance with the regional Shiv Sena, the tie-up has been under strain. Notably, in UP, the alliance between the SP and BSP covers a swathe of castes and religious communities—the SP has the support of the Muslims and the Yadavs while the BSP, led by Mayawati, has the support of the Dalits and other backward castes. In Bihar, the Congress and RJD, contesting together, could prove to be a formidable challenger to the BJP.

ALSO READ: Do Regional Parties Hold Key To Next Govt?

In Rajasthan and Madhya Pradesh, in recent assembly elections, the Congress was able to win and form the state governments. That could be a critical factor in determining who the voters in those states would choose in the national elections, giving the Congress an edge in the choice. In 2014, the BJP won 71 of the 80 seats in UP; 22 of the 40 in Bihar; all of the 26 seats in Gujarat; 23 of the 48 in Maharashtra; 27 of the 29 in Madhya Pradesh; and all 25 in Rajasthan.

This time, things could be much tougher for it. The BJP and its allies would need 272 seats in the 543-strong Parliament in order to decisively win. But, although Mr Modi and his party are hoping to get extra numbers from Bengal, Odisha and some of the southern states to make up for the losses in the six crucial states, it is not something it can bank on. The regional parties in these states are formidably strong, with some such as the Trinamool Congress having deep, cadre-based support bases.

In the six states that powered its 2014 victory, the BJP has taken steps to garner support in the face of a stronger opposition. In UP, Bihar and Madhya Pradesh, it has tried to woo the non-Yadav and other backward classes by according the status of a constitutional body to the National Commission for Other Backward Classes, which decides on job reservations for India’s most backward classes. It has also tried to alleviate the apprehensions of the poorer sections of India’s upper castes (who fear discrimination when it comes to jobs) by reserving 10% of jobs for upper-caste people coming under the “economically weaker section”.

But still the going will be tough for Mr Modi’s party. In UP, the BSP-SP alliance is strong and theoretically covers a large swathe of castes and communities. For instance, Muslims who have remained almost universally apprehensive of Mr Modi’s government will be unlikely to vote for the BJP or any of its allies.

ALSO READ: It It Advantage Modi?

In two of the six crucial states, however, the BJP could leverage Mr Modi’s own popularity. In a TV interview recently, Mr Modi boasted: “Modi hi Modi ko challenge kiya hai” (Modi is the only challenger to Modi). In states such as Maharashtra and Gujarat, his popularity could translate into regional waves of support when people cast their votes. But in the recent state assembly election in Gujarat, while the BJP won and formed the government, the Congress fared better in terms of the number of votes it managed to get. And, in Maharashtra, where its fate will be partly governed by the support extended by its partner, the Shiv Sena, the two have had regular spats in recent years, differing over many issues.

Many believe that in 2014, when the BJP won 194 seats in the six mentioned states, it had exhausted the maximum number that it could have hoped for from those. And that a repeat of that performance now looks unlikely.