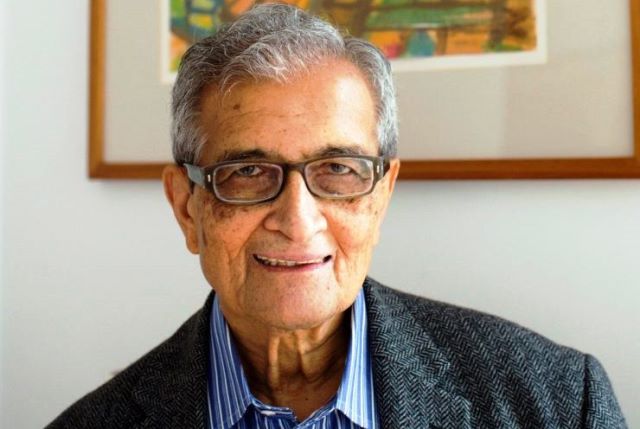 Who is Amartya Sen? His global admiration is based more on his work as an economist than as a philosopher. Jean Dreze himself a celebrated economist inquiring into development issues based on Indian experiences and who is a long time collaborator of Professor Sen in many works sees in the Nobel laureate a mirror image of Adam Smith, that is, an economist, a philosopher and much more rolled into one person. In the foreword that he has penned for Lawrence Hamilton’s book How to Read Amartya Sen, Dreze says he sees in Sen “not only… a great mind but also… someone who is keen to bring about practical change in the world.” Indeed the world finds in him more than a celebrated economist and a philosopher but, as Dreze says, “a man of action, even if his preferred tool of action is not climbing barricades, or shooting petitions but public reasoning.” This argumentative Indian is a campaigner for a better and fairer world.

The world salutes the 87 year old Professor Sen whose monumental oeuvre besides leaving a profound impact on “scholarship, policy and action in a wide range of fields” has ignited human minds to ask questions and be sceptical of wisdom passed through generations. However the world may celebrate the work that is still growing of the Harvard professor of economics and philosophy, a group of saffronised people in India, not necessarily all concentrated in Bengal from where he hails, will not let an opportunity pass to ask what has this Nobel laureate given to India or say a few short visits to India leaving his comforts in the US behind are not enough to lay claims that he cares for the welfare of unprivileged here.

Fusillade of such inanities, however, originates in people who lack education to grasp what the Professor is all about. They are simply egged on by some Hindu nationalist politicians enraged by Professor Sen all the time calling a spade a spade.

The present political dispensation has been overtly critical though lacking in substance of Professor Sen for his stand on many social and economic issues but particularly for saying that using religion for the purpose of discrimination is anathema to founding principles of India. In a recent interview with PTI, he said: “Certainly I am critical of any political party that inflames communal and divisive sentiments, particularly between the Hindus and the Muslims.”

Giving the example of Bengal, which paid dearly in the past due to communal strife, he hopes the people of the state will have the good sense to reject the non-secular forces. Incidentally, BJP is all desperate to dethrone Trinamool Congress seen to be pandering to the Muslims who have nearly 30 per cent share of votes in West Bengal. Being in majority in some districts, including overwhelmingly in Murshidabad and Malda, the way the largest minority community votes in April elections to the 294 seat West Bengal Assembly could well decide the outcome in nearly 100 constituencies.

Professor Sen continuing to give warnings to the people on dangers of communalism when elections are to be held in West Bengal in three months cannot be music to the ears of BJP. Therefore, it is only logical that the party will use every handle available to it, including the officials of central university Visva-Bharati to fire salvos, however hollow they may be at him. Professor Sen is not spared the accusation that he is in illegal occupation of some land beyond what is sanctioned in the 99 year lease. What is overlooked is that his maternal grandfather scholar extraordinaire Kshitimohan Sen came to Santiniketan at the invitation of Rabindranath Tagore and helped him in building Visva-Bharati. The house Pratichi was built by Professor Sen’s father on lease land but he also bought some parcels of freehold land.

But Hindu nationalists are not expected to be forgiving of the man when he debunks the claims that science and mathematics flourished in ancient India in splendid isolation from the rest of the world. Saffronite individuals and institutions may be in denial but through centuries the world is witness to how our “intellectual horizons expand when we learn from each other.” To consider a recent example, the vaccine to counter the Covid-19 pandemic became a reality in ten months against the usual about ten years taken to develop a new vaccine because of close collaboration among scientists from different countries, including India.

More recently Professor Sen courted displeasure of saffron brigade by pointing out that not the Vedic period but the first millennium was the “golden age” of mathematics. Science has got nothing to do with the world of fantasy. “The great mathematical revolution in India was led particularly by Aryabhata, who was born in 476 AD. What Aryabhata developed initially was the ‘golden age’ taken forward by other great mathematicians in India like Brahmagupta, Bhaskara and others. While deeply original, Aryabhata’s mathematics was substantially influenced by the mathematical revolution that had already taken place in Greece, Babylon and Rome,” he said.

Newspapermen who speak to the economist cum philosopher know that Sen will desist from deliberating on issues on which he had not done the required study and inquiry. As he told a reporter: “I do not have the habit of passing judgement on issues about which I have at the most three and a half minutes to read in newspapers.” On another occasion asked by the then editor of Anandabazar Patrika Anirban Chattopadhyaya whether the growing emphasis on technology at the expense of humanities in the country’s higher education is not a step in the wrong direction, the answer that Professor Sen gave should be a lesson for many whose views are often sought.

“If what you are saying is happening, then it’s an important issue to ponder. But I don’t think I am competent enough to speak on the subject. I am here suddenly from abroad and I criticise the country’s education system (at college level) and then disappear like a comet. I shall never do that,” said Professor Sen.

He would be more comfortable to speak on primary education since the Pratichi Trust, set up with his Nobel honorarium, is working on the sector. This is intellectual honesty of the highest order. Professor Sen did not endear himself to the ruling establishment when though based on empirical evidences he said the “spread of education among girls in Bangladesh is far higher than both in Bengal and India. So also they have more access to health care than their counterparts here. But why should these differences exist? We are both Bengali people.” Incidentally, work of Pratichi Trust (Bangladesh) of which economist Rehaman Sobhan is chairman is focussed on primary education and health.

BJP has every reason to dislike Manmohan Singh’s friend Professor Sen who has been overtly critical of demonetisation, Citizenship (Amendment Act) and more recently the farm laws. As he maintains that the space for debate in the country is shrinking and his airing of the kind of regime he wanted ahead of 2014 and 2019 elections, it is only likely that BJP will have a strong distaste for him which is manifest in many ways. But it is not only Professor Sen, but historians such as Romila Thapar, Irfan Habib and Ramachandra Guha and economists, including Raghuram Rajan, Prabhat Patnaik and Kaushik Basu have fallen foul of saffronites for speaking their mind.