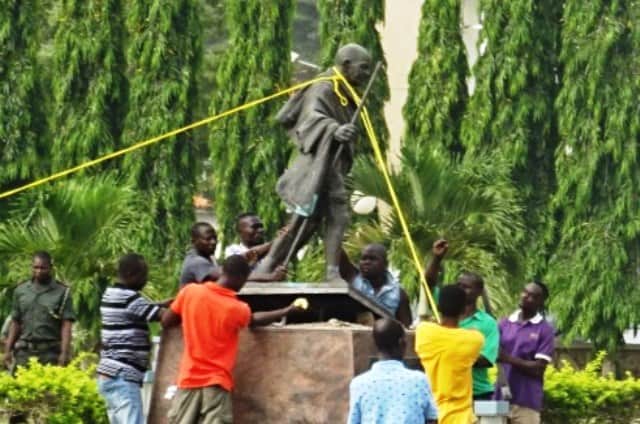 th century Maratha ruler Shivaji is planned for installation off Mumbai. A recent inclusion is Gandhi’s assassin, Nathuram Godse.   This also impacts India’s functioning as the world’s largest democracy. Its Parliament Complex alone has 14 statues. Eleven more dominate its courtyard. Another 20 are in the huge waiting hall and four are installed in parliament’s library. Between the government of the day and the parliamentary opposition, it is competitive commemoration at its best.   The Statue of Unity, 182 meter tall, is located near the Narmada dam in Gujarat. Costing an estimated Rupees 3,000 crores or USD 430 million, it was unveiled by Prime Minister Narendra Modi to commemorate Sardar Vallabhbhi Patel who united India, post-independence, from the British. Through this statue and more, the current ruling dispensation has sought to appropriate Patel’s legacy from the Congress culture spawned by Gandhi and his favoured protégé Jawaharlal Nehru. That Gandhi mentored both, that the two had sunk personal differences and worked together is glossed over. It remains a never-ending debate. As for Gandhi’s statue in distant Ghana, it was quietly removed in the night of December 11-12. Over 2,000 people, treating its presence as an ‘issue of self-respect’ had launched an online protest calling Gandhi a “racist against black Africans”. This one at a university in Accra was unveiled by then Indian President Pranab Mukherjee just 18 months back. Having hosted two African Summits in the recent years, India wants to reach out to the continent as part of its ‘soft’ diplomacy. Safety of the Gandhi statue may have worried the Ghanian authorities. Ghana uniquely treasures a head-less statue of its founding father Kwame Nkrumah. The statue’s head was knocked off by rebels who deposed Nkrumah. The head and the torso are now in Nkrumah’s memorial museum. One may recall that Africans launched similar protests against Cecil Rhodes. South Africa has removed Rhodes’ statues to safety. Oxford University that has the famous Rhodes scholarship, is resisting. This is another never-ending debate. Both, warfare and civilian conflicts target statues. Popular sentiment can get destructive, compelling safe-keeping and exclusion, like statues of erstwhile British rulers that dominated India Gate in New Delhi and in other Indian cities. Was Gandhi a racist? Records show that while fighting the South African rulers he had written about black Africans in unflattering terms.  Even Nelson Mandela whose statue, incidentally, is being planned at the United Nations, confirms this. While applauding Gandhi’s contribution to mankind, he wrote in his memoirs “Long March to Freedom” that Gandhi had not been supportive of the anti-apartheid movement.  On Gandhi’s 125th birthday, he commented: “Gandhi must be judged in the context of the time and the circumstances.” One has to grant that a person in public life, even Gandhi for that matter, needs to, and does, evolve with time. But records do not indicate if he changed his views on black Africans, once he got immersed in India’s freedom movement. Yet, Gandhi inspired African leaders including Kenya’s Jomo Kenyatta, Nigeria’s Azikiwe and South Africa’s Luthuli, besides Martin Luther King in the United States.  His role in the last century’s de-colonization across the world cannot be belittled by the statue’s removal. Gandhi was deified during his lifetime and deprecated proposals to install his statues. His grandson Gopalakrishna quotes from Harijan newspaper of  February 11, 1939:  “It will be a waste of good money to spend Rs 25,000 on erecting a clay or metallic statue of the figure of a man who is himself made of clay…”  This was ignored. Gandhi was never consulted when his statues were raised in his lifetime, across South Asia and in Europe. They have continued to come up in prodigal numbers, more after his assassination, right to our present times. The grandson (his maternal grandfather was C. Rajagopalachari)  writes that “Gandhi did not want and does not need statues” and urges that “India should see the removal (in Ghana) as the decision of a sovereign people having a say in the design of their political architecture and their public spaces.” The politics of statues, flags and memorials anywhere often carries its own ironies. The Gandhi in bronze in London’s Parliament Square in 2017, stands beside those of his two jailors — white South Africa’s Jan Smuts and the British Raj’s Winston Churchill. The Confederacy with its 700 monuments continues to be celebrated in the United States. Adolf Hitler’s bunker, where he killed himself, was sealed in the early 1990s, after Germany’s reunification. Today, it sits underneath a parking lot marked only with a small plaque. But in 2016, private investors paid to open a model bunker nearby for visitors as a historical exhibition, a controversial decision that upset the city’s historians and Jewish leaders. In Central European cities, one of them being Prague, statues of Lenin and Stalin were felled before cheering public after the demise of the Soviet Union. But the presence of Hitler is palpable and preserved for posterity, it remains a tourist attraction. Asked to explain this seeming contradiction, the learned guide told this writer: “We are too close to the history to make a value judgment. For now, the government of the day decides.” A statue of Karl Marx installed in his hometown Trier in Germany has raised public heckles, not because they want to disown Marx – they resent its being gifted by the Chinese. Almost every town in Maharashtra’s Vidarbha region has a statue of B R Ambedkar, leader of India’s oppressed and the man who piloted the drafting of the country’s Constitution. It is a symbol of their awakening and political assertion. When tiny Tripura in India’s northeastern region ended the Marxists’ rule after three decades, among the ‘casualties’ was a Lenin statue in a remote village. The state’s then governor applauded it. That, too, was symbol of assertion and the new rulers’ attempt at re-writing history. But ideas survive. Whether or not there are statues in their name, be it Lenin or Gandhi, their thought will continue to inspire the poor and the marginalized, wherever they are. (The writer can be reached at mahendraved07@gmail.com )  ]]> 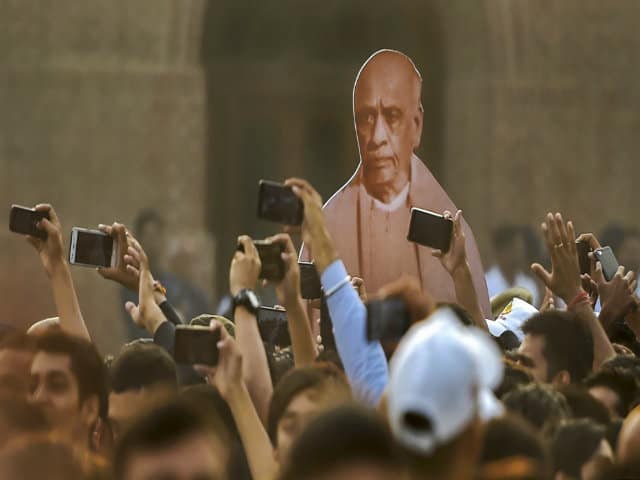 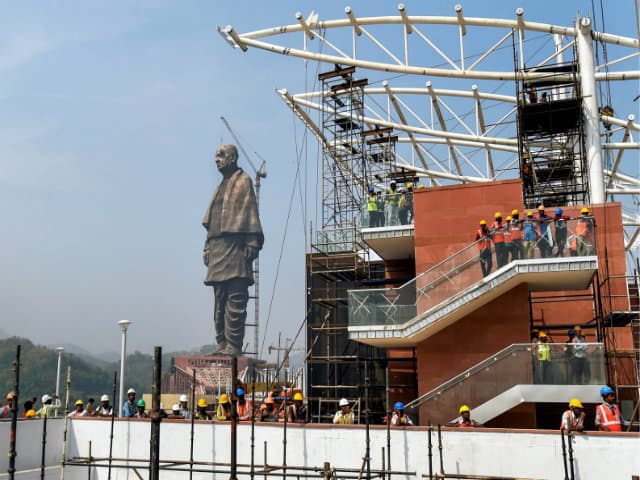 — ANI (@ANI) October 31, 2018 Had Sardar Patel not united the country, we would need visas to see lions or pay homage at Somnath or view the Charminar in Hyderabad, the prime minister said. He added that the statue will remind those who question India’s existence that this nation was, is and will remain eternal. He described the Statue of Unity as a symbol of the country’s engineering and technical capabilities. The imposing monument is twice the height of the Statue of Liberty in the US and is built on an islet, Sadhu Bet, near the Sardar Sarovar Dam in Gujarat’s Narmada district. It has been built using over 70,000 tonnes of cement, 18,500 tonnes of reinforcement steel, 6,000 tonnes of structural steel and 1,700 metric tonnes of bronze, which was used for the outer cladding of the structure. A viewing gallery has been created at a height of 135 metres inside the statue to enable tourists to have a view of the dam and nearby mountain ranges. (PTI)]]> 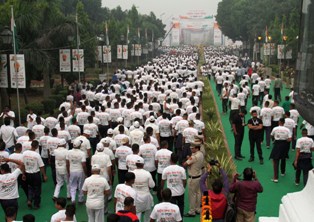