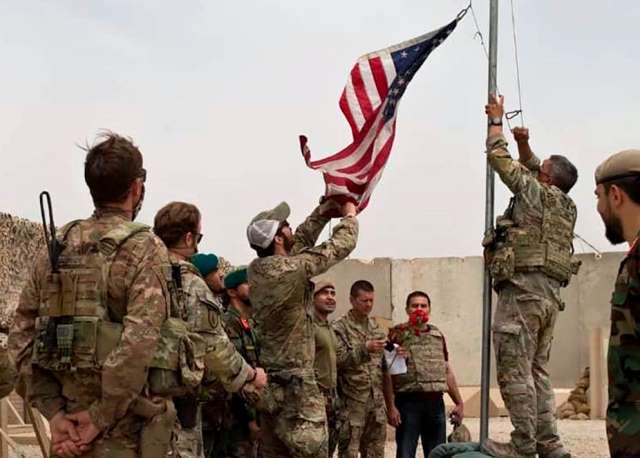 The United States attacked Afghanistan to achieve some specific objectives including: 1) Kill Osama bin Laden; 2) topple Taliban regime and install a cooperative Afghan government; and 3) establish influence in the region.

The withdrawal of the US after a 20-year war under NATO banner has led to many interpretations. All different positions appear to be supported by good arguments. Many see it as a failure and defeat. Others fear that the region will become a nest-bed for ‘terrorists’ again. However, it seems that the US entered Afghanistan with a broader plan and it achieved all its objectives despite these contradictory statements even by some eminent people. Pakistan and Iran appear to have benefitted while it seems India may have been left adrift without friends in the region.

The conflicting narratives whether the United States won or lost emerge under three types of human activity and nature:

When the US toppled the Taliban government without any reasonable resistance, the circumstances further encouraged and facilitated the US to influence the regional geo-strategic overture in its favour. It influenced the shape of the China-Pakistan Economic Corridor, Iran-Pakistan gas pipeline project, and other regional issues

The USA planned to counter China’s increasing influence in Pakistan, Iran, Afghanistan and Central Asia. Therefore US designs were manifold and a very prudent policy was required to achieve all these objectives.

While the USA was pursuing its policy, India had become somewhat optimist and was obstructing Pakistan by establishing its bases within Afghanistan and promoting militancy in the western and central areas of Pakistan. Pakistan seemed to be squeezed down to a nonentity. However, India’s policy would appear to have been somewhat irrational as it failed to consider deeper natural relationships based on racial, religious, territorial and political bonds. These seemed to have been overlooked by both Indian and US policymakers.

Pakistan took counter initiatives to survive through this period. It cooperated with the international community and took measure against terrorism and extremism in the region. Pakistan opened the Kartarpur Corridor and even sought significant changes in the education syllabus as desired by the minorities living in Pakistan. Laws regarding religious matters of the minorities were introduced to boost up their sense of integration and respect in the society.

Pakistan remained with the international community despite an aggressive Indian policy against Pakistan and huge investment in Afghanistan. The Indian government opened its educational institutions for Afghan students. India set up training camps in different cities of Afghanistan and infused anti-Pakistan sentiments which damaged peace in KPK, Baluchistan and Punjab.

In all this, the United States however had a parallel policy while India seems to have put all its eggs in one basket or approach.

Consequently, the fall of Ashraf Ghani’s government and the recapture of Kabul by the Taliban has been devastating for the BJP government. BJP underestimated the sanctity and strategic importance of ‘neighbourhood’ despite facing its practical implications when interfering within the internal affairs of their small neighbouring countries.

Despite all odds and lapses, the stark reality is that Pakistan and Afghanistan cannot be separated, being neighbours and racially and religiously connected. This dimension also explains why BJP government failed in its Middle East policy. It has had to bear loss of close neighbourhood ties with Iran, Afghanistan, China and Pakistan. The Taliban’s declaration to support the Kashmiri Muslims has further stamped the failure of the BJP policy in Afghanistan.

On the other hand, as far as the US is concerned, it has won the war because it achieved its objectives and moved ahead with a well worked out policy. The USA killed Osama Bin Laden, toppled a hostile Taliban government, damaged CPEC and influenced Iran, Afghan groups, Pakistan, China and other countries. It deftly and  simultaneously carried on its aggressive activities as well as backdoor diplomacy with Taliban. This strategy not only maintained US terror on the Afghans but also encouraged them to reach an agreement with the US.

US policymakers seemed clear about the impotency of the Afghans but on the other hand they were also aware of the religious potency and might of Taliban. Therefore through backdoor diplomacy Americans settled all issues with Taliban and left as promised in August 2021. What these promises are will become clearer in the next few years. The new Taliban is a much different Taliban in that it seems amenable to American ‘friendship’.

During the last 20 years, Taliban forces did not face any kind of scarcity of modern weapons, food, technology and backdoor channel diplomacy. The West can best reveal from where Taliban were being facilitated.

The US appears to have won because it got its objectives and evacuated its armies. It also got promises from Taliban to respect international pressure and UN Universal Declaration of Human Rights. The Taliban also assured that Afghanistan would not let terrorists act against US and its allies. It is most likely that the US has also got assurances from Taliban to curtail if not stop the drug trade.

The US will now be able to balance its finances that were being drained in Afghanistan and instead concentrate on other interests and threats. Many wrote critical opinions and gave speeches criticizing the abrupt and unannounced departure of the US army from Afghanistan. They have deemed it an utter and humiliating defeat of the US. Yet the US showed its military might by reappearing in Afghanistan at will to evacuate its ambassadorial staff and other personnel. How many defeated armies are able to go back unhindered and recover their people, even with the cooperation of so called winners! Commentators seem to miss this point. This is clearly not a black and white win or loser scenario.

If Taliban fulfil all the promises, it will be a victory for the US, Pakistan, Iran and the region. Therefore the reemergence of Taliban with the help of the US and with consent of Pakistan and Iran affirms the success and very smart policy of the United States who managed it all behind the curtain. The US has killed thousands of Afghans. Despite that, the Taliban have desired to have cordial relations with them because common sense guides that all international forums, institutions and aggressive as well as peace diplomacy revolve around the US.

China cannot counter the US because both have different domains in world politics. China penetrates through commercial designs and modes while US asserts through aggressive diplomacy. Therefore, there is possibility or competition of a US-China conflict in contrast to the previous US-Soviet Union cold and proxy wars. The Soviet was ideologically competing with the US for dominance.

China is not interested in ideological competition. This confirms the US as an unchallengeable might in the battlefield while China has no match in the economic sphere. China as world power has UN veto and enjoys high and influential stature as an effective world player

The US ties with India are important but the recent developments in Afghanistan, especially engineered by the US, appear to show no favours or gains for India. It is highly unlikely that India knew of America’s deeper and secretive policies. It seems it may have been caught unaware and on a backfoot.

The withdrawal of the US from Afghanistan and agreement with Taliban is a wise decision as it has achieved all of American strategic goals. Its influence remains and it still marshals events in the region. Unfortunately, India may be the only looser in the Afghan game while Iran and Pakistan will gain special role in the coming years in the region.