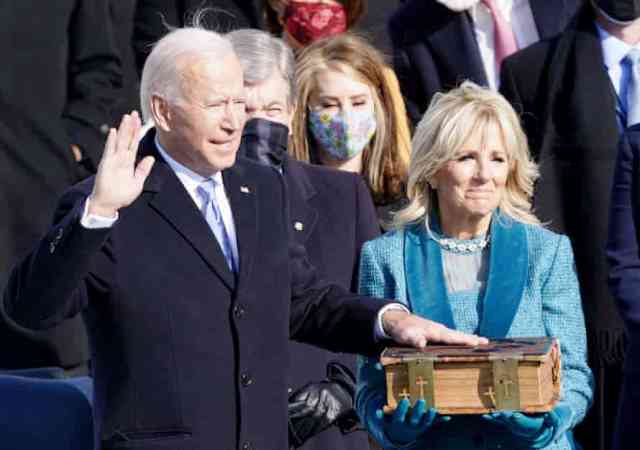 And yet the dawn is ours
before we knew it
Somehow, we do it
Somehow we’ve weathered and witnessed
a nation that isn’t broken
but simply unfinished
We the successors of a country and a time
Where a skinny Black girl
descended from slaves and raised by a single mother
can dream of becoming president
only to find herself reciting for one…
– Excerpt from The Hill We Climb by Amanda Gorman

Gorman, female Black poet and activist, 22, read her passionate and disturbing poem, first penned on January 6, and then in a flash of sudden energy after the Capitol Hill occupation by Right-wing Trump supporters, at the inauguration of US President Joe Biden and Vice President Kamala Harris. She follows Elizabeth Alexander and Maya Angelou, who recited at the presidential inauguration of Barack Obama and Bill Clinton.

Amanda has painted a kaleidoscopic rainbow in response to the collective trauma of a polarised and divided nation. One American media organisation, sensing the emotional mood, has observed that Biden need not be flamboyant at all, or choose to be in the headlines for all the ‘wrong’ reasons like Donald Trump, but he should just do his work with a quiet, stoic and steadfast resilience, even if he is branded ‘boring’. And that is what the new president seems to be doing.

In one of his first speeches to his White House team, he categorically said: “If you’re ever working with me and I hear you treat another colleague with disrespect, talk down to someone, I promise you, I will fire you on the spot… On the spot. No ifs or buts. Everybody is entitled to be treated with decency and dignity. That’s been missing in a big way the last four years.”

He has been frank and honest. To his political aides he confessed that “I’m going to make mistakes. When I make them, I’ll acknowledge them and I’ll tell you and I’ll need your help to help me correct them…We’re not going to walk away, we’re going to take responsibility.”

So, what has been missing in a big way in the last four years was quickly rectified by some far-reaching decisions by the new President soon after he took office. These orders will have an eventful and long-term national and global impact in a world which is still struggling to cope with the pessimistic consequences of the pandemic.

Among other important decisions, Biden overturned several retrograde and sectarian orders by Trump like withdrawal from the WHO and the ban on citizens of certain Muslim countries from entering American soil. He brought back expert virologist Anthony Fauci, who defied Trump’s juvenile denial of the deadly virus and was side-lined. Besides, his multi-cultural cabinet is full of various colours, creeds, and inherited histories from across the pluralist spectrum of America, with representation of secular and liberal experts, including talented women professionals.

Some from Indian origin have been taken in his team in key positions. Interestingly, two individuals in the Biden campaign, with alleged overseas RSS links, have not been accommodated. It should be noted that several eminent American citizens had petitioned Biden to be careful of individuals aligned with the BJP-RSS and their overseas allies in the US, who had followed the unprecedented call by Prime Minister Narendra Modi at the Howdy Modi rally in Houston in July 2020, with Trump as the chief guest: Abki baar Trump sarkar.

*Ties with WHO reinstated. A delegation led by Fauci will attend the 148th session of the WHO Executive Board to be held soon.

*Social distancing and compulsory mask for all in federal buildings and territory. A ‘100 Days Masking’ campaign to propagate masks across America. Indeed, Trump and his top aides and followers refused to wear masks.

*Trump tried to block the Deferred Action for Childhood Arrivals (DACA) programme, under which immigrants brought to the US as children are protected. Biden passed an order to “preserve and fortify” DACA.

*The notorious wall along the Mexican border has been scrapped.

*The ‘Muslim ban’ has been revoked. Trump stopped citizens of certain Muslim and African countries from flying into America.

*The Trump administration’s move to prevent the census from counting undocumented immigrants has been revoked. Harsh immigration enforcement policies have been stopped.

*America has decided to re-join the Paris Agreement on climate change within 30 days.

Among other significant decisions, the controversial $9 billion Keystone XL pipeline project, which was opposed by indigenous communities and environmentalists, and was backed by Trump, has been cancelled. This has yet again triggered the protracted struggle in Dakota by indigenous communities of Standing Rock and Native Americans which peaked in 2016. They want the pipeline to be scrapped because it will destroy their homeland ecology.

Biden has asked the government to reinterpret the country’s Civil Rights Act so as to stop discrimination based on gender, colour, sex, religion and ethnicity. Trump administration’s 1776 Commission report, which aimed to promote ‘patriotic education’ in schools has been overruled. Historians had dubbed it as partisan political propaganda.

Vermont Senator and socialist Bernie Sanders, with a huge following among the millennials, has been made the head of the Senate Budget Committee. Sanders has been campaigning for radical health reforms to help ordinary citizens and low-income groups, students’ loan waiver, big financial Covid relief for millions who have been rendered jobless, hungry, or, are facing acute economic crisis, among other radical reforms. He has been backed by young and progressive democrats like Ilhan Omar and Alexandria Ocasio-Cortez, among others.

The Vermont senator told the CNN that the Democrat-controlled federal government cannot wait “months and months” to pacify hardline Republicans who favour austerity measures. If Republicans refuse to back Biden’s $1.9 trillion opening relief proposal, Sanders has asserted that he is ready to use the budget reconciliation process to pass a coronavirus aid package and legislation.

In terms of foreign policy there are unconfirmed reports that the arms deals with Saudi Arabia might be frozen. This has been welcomed by some Democrats in the light of the abysmal humanitarian crisis in Yemen. He will surely rethink the Iran sanctions, which Obama overruled, and Trump brought back. While Jerusalem might stay as the new Israeli capital, the peace process might be restarted. On China, there will certainly be more strategic dialogue, and less rhetoric and posturing.

Meanwhile, Biden has also reversed another retrograde ban by Trump — transgender Americans can now join the military. The order said that all “qualified Americans can serve their country in uniform”.

Besides, as what is seen as a direct fall-out of the new freedom in the air, striking workers in Bronx, New York, captured national attention and got solid support from local communities. Around 1,400 members of the Teamsters Local 202 union walked off their jobs on January 17, demanding a $1 raise. They said that they were in the font-lines against all odds in difficult circumstances to feed New Yorkers during the pandemic, with the Hunts Point Market supplying about 60 per cent of the local supplies. After a one-week strike, they got the hike, and more.

Hence, truly, Amanda’s poem of infinite hope might not be only pure passion. In New York in this cold, it might be just one dollar or a bit more for the working classes, but her inspired poem is literally translating on the streets of America.