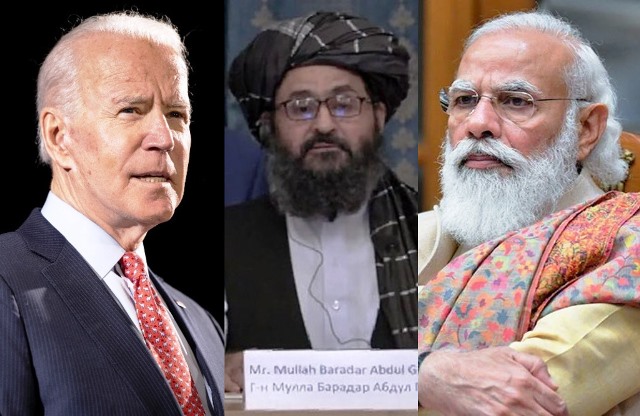 Next-door to India, a regional event with global implications that is dreaded by all, whether in support or opposition, is happening. Well-armed and highly motivated, the Taliban are overrunning Afghanistan, fighting pitched territorial battles with the government forces, pushing them out of the vast countryside and confining them to the cities.

It may be a matter of weeks before the government in Kabul collapses because the political and military will of the world powers has also collapsed. There seems to be room only for diplomacy as war-weary US-Nato withdraw their soldiers, a process they may complete well before the September 11 deadline.

The Taliban appear unstoppable. They couldn’t care less what the world thinks of them. They are focused totally on regaining power and their own national issues. A recent interview a top Taliban leader gave ‘Foreign Policy’ reiterates their well-known and much-criticised approach to their women. There will be little education and no jobs for them once they return to power.

The Taliban calculate that the world will worship the victor. After all, they have huge untapped minerals to offer. Weren’t they, when in power, wooed for access and exploitation of Central Asia’s gas an oil – till 9/11 happened?

But the dread persists and it is not just due to uncertainties of what may lie ahead. The nations that are withdrawing from a war they cannot win after nearly two decades are frightened of terrorism in the shape of Al Qaida and the Islamic State returning to Afghanistan, along with and even without the Taliban at the helm. The extremist forces they created and battled by turns as per their expediency have acquired strength they cannot control. It’s déjà vu.

This is most apparent in the Biden administration that had little choice – and inclination – to undo what the previous Trump administration handed down. Biden’s Defense Secretary Lloyd Austin says Al Qaeda could regroup in Afghanistan in two years.  Gen. Mark Milley, the chairman of the Joint Chiefs of Staff and a veteran of the war in Afghanistan, told the US Senate Appropriations Committee that he agreed. It was the most specific public forecast of the prospects for a renewed international terrorist threat from Afghanistan since President Joe Biden announced in April that all U.S. troops would withdraw by September 11.

If America fears this even as it withdraws, unconditionally and completely, the France-based think tank, Center for the Analysis of Terrorism (CAT), in a paper published this month sees resurgence of Al Qaida, the IS and its numerous affiliates across a vast region that covers West, Central and South Asia as  result of the forthcoming tectonic changes in Afghanistan.

The title and the focus are “the Pakistani Jihadis and Global Jihad” which India can hardly afford to ignore. It says, “…following the US withdrawal from Afghanistan, one is likely to witness a resurgence of the Taliban and probably a more operational coordination between Pakistan-supported groups like the LET & JEM and the Taliban.”

It further says: “The current threat landscape and its evolution is strongly tied to the evolution, transformation and fragmentation of historical organizations active in the region since the late 80s and to the continuing alignment of political organs and elites’ interests in Pakistan with those of the Pakistani jihadi organizations (for example the annexation of Jammu and Kashmir), whilst several of these organizations have since adhered to the global agenda of terrorist organizations posing a direct threat to neighbouring countries, primarily India.”

Is it surprising that Pakistan castigates India as a ‘spoiler’ in Afghanistan for trying to deny the strategic advantage it hopes to gain, post-US withdrawal, from a new regime in Kabul? But Pakistan has own set of Cassandras to deal with in the shape of more refugees, more drugs and more sectarian violence. TTP, the Pakistani Taliban have the same ideological inclination as the Afghan Taliban they have hosted for two decades.

The situation is unenviable for India that sees repeat of its recent past. It was friendless when the Russians withdrew and the regime they had supported collapsed. It stands to become friendless again with a Taliban rise, this time having invested over USD three billion.

India has little choice but to engage with the Taliban, and whoever else gains powers after the US-led evacuation. Indeed, its growing proximity to the US makes its presence more vulnerable from the very people it has opposed and criticised. The memories of the 1999 hijack of an Indian passenger aircraft to Kandahar are fresh and so are attacks on its interests by the Haqqani group, said to be working for Pakistan’s ISI.

When the Mujahideen took power in the early 1990s, MK Bhadrakumar, a senior diplomat well versed in the region’s affairs was dispatched. He met the new top leadership, including Burhanuddin Rabbani and Ahmed Shah Masud. Full advantage was taken of an airport refuelling stopover in Delhi by Rabbani and his men. The rapprochement took long, but it happened.

The diplomatic situation is many times more challenging, what with India being identified with the US and against the Sino-Pak alliance, with old allies Russia and Iran missing from its side.

India is a straggler in engaging with the Taliban leaders who have resented India. The past record has been one of mutual dislike and distrust. This is hardly the time to reminisce what India has done or can do in Afghanistan and the goodwill it has gained. The time is to salvage what is built and protect, even the embassy in Kabul and consulates in other Afghan cities.

This is by far the biggest diplomatic challenge with overwhelming security component that India faces in many years.