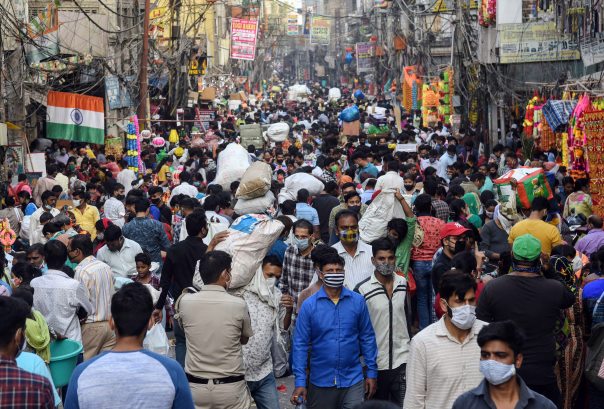 Indonesia now is in exactly the same terrible and tragic situation as India was during the peak of the second surge. Australia is going for a lockdown, and even New Zealand, hitherto totally safe, is on high alert. With cases rising in thousands every day, Boris Johnson might once again take the UK down the drain if he opens up the lockdown on July 19, even while all is not well in Catalonia/Barcelona in Spain, among other EU nations.

Vice President Kamala Harris led a ‘pride rally’ recently without a mask. Americans in many parts are allowed to come out in the open without masks. However, with 50 per cent fully vaccinated, is the virus really “on the run”, as President Joe Biden so proudly claimed on Independence Day, 4th of July?

There is reportedly a ‘silent surge’ in many parts of America and it is worrisome. It is being largely attributed to clusters of unvaccinated people, including Trump-supporters ‘in denial’. A Georgetown University study reportedly found 30 clusters of counties, of which five are across the Southeast and Midwest, from Georgia to Texas, across Missouri, and parts of Oklahoma, Tennessee, Louisiana, Alabama and Arkansas, where the threat is real and looming large.

So how well is the Indian State with a new health minister at the helm prepared for the ‘third surge’, even as the second wave lingers on, and thousands care a damn in tourist spots, without masks or physical distancing?

Listen to the Covid Task Force head, Dr VK Paul, as reported by the Indian Express: “It is right that the graph (of the decline in the number of cases) has slowed down. It was earlier declining at a faster pace. It only shows that we cannot take the situation for granted. If it is around 35,000-37,000 cases per day, this is almost one-third the number of cases we saw during the first wave peak. The war is not over; the second wave is not over. It is perhaps more visible in some districts and two particular states and the Northeast, but it is still there. As long as this is still rising there, the nation is not safe…With a lot of effort and difficulty, we have reached a situation where cases are on the decline. The situation is bad only in a few districts. But all this can be snatched away from us because we have not contained the virus completely. If we give the virus an opportunity, and chains of transmission are launched…this is something we cannot afford…”

Indians banged thalis, frying pans, pressure cookers at 5 pm on March 22, 2021, following the call of Prime Minister Narendra Modi, even when the virus was just about spreading its wings. Indians followed dutifully with no questions asked, the sudden, draconian and unplanned lockdown last March, which led to the exodus of lakhs of migrant workers. Indians even believed the PM when he said that all will be well in 21 days.

ALSO READ: Virus Is There, Fear Is Gone

Meanwhile, the states fought their own battles without any tangible help from the Center. Millions were rendered jobless, the poor were left to their helpless fate, the economy tanked and continues to tank, hunger, starvation, anxiety and depression stalked the unhappy landscape, there was ‘no vaccine policy’ worth its name, and people hoped against hope that 2021 will start with a flicker of hope. Remember the PM’s cathartic speech at the World Economic Forum’s Davos Dialogue in January 2021?

“Today, Covid cases are declining rapidly in India… India’s stats cannot be compared with one country as 18 per cent of the world’s population lives here and yet we not only solved our problems but also helped the world fight the pandemic… In these tough times, India has been undertaking its global responsibility from the beginning. When airspace was closed in many countries, India took more than 1 lakh citizens to their countries and delivered essential medicines to more than 150 countries…”

Significantly, the PM said India’s role will increase with the rollout of more ‘Made in India’ Covid-19 vaccines. Clearly, this was chest-thumping in its most glorious form at the world stage.

Then arrived the deadly second surge, even as the PM and his Union home minster were obsessed with capturing Bengal at any cost, while welcoming millions at the super-spreader Kumbh. The PM was delighted to see huge crowds in one of his last rallies in Bengal. While sections of the stooge media played along, the international media published front page pictures of mass cremations, accompanied with highly critical text putting the entire blame on Modi. And they were on the spot, on the dot. Surely, the mass tragedy was a public spectacle for the world to see!

Lest we forget, there were tens of thousands dying due to the acute scarcity of hospital beds, oxygen, life-saving drugs, with cremation and burial grounds unable to find space for the dead bodies, while parking lots, pavements, open spaces and public parks in some places were converted into cremation grounds. Some electric crematoriums refused to work because their ‘internal organs’ had melted due to the relentless heat, huge make-shift walls were created to block journalists to report on the relentless mass cremations (in Lucknow), and the data of deaths were allegedly fudged or censored, even while the obituary pages were full of tributes to the dead (as in Gujarat).

So, is India prepared for the third wave?

On June 19, said Dr Randeep Guleria, Director, All India Institute of Medical Sciences, Delhi:  “We don’t seem to have learnt from what happened between the first and the second wave. Again crowds are building up… people are gathering. It will take some time for the number of cases to start rising at the national level. But it could happen within the next six to eight weeks… maybe a little longer.” He said that unless the population is vaccinated, the country will remain vulnerable in the coming months.

The Hindu reported in early May that that the principal scientific adviser to the government of India has warned that the third wave of Covid-19 is inevitable. “There is, however, no clear time-line on when this third phase will occur. We should be prepared for new waves, and Covid-appropriate behaviour and vaccine upgrades is the way forward,” he said.

Modi has made the promise on live television of total and free vaccination in India after June 21. Hoardings have come up with the PM’s mug shot profusely thanking him for free vaccines. If Rahul Gandhi as much as tweets: ‘July has come. Where are the vaccines?’ some central ministers suddenly emerge from the shadows and Rahul gets a good tongue-lashing.

The situation is as fuzzy as it gets. Noida apparently stopped vaccination from June 30 for a week – reasons not known. Gujarat suspended vaccination recently for unknown reasons – there were no vaccines, according to sources, it was reported. Vaccination was stopped in Mumbai due to lack of vaccines, but restarted again. Almost all the big states reportedly have vaccination shortfalls; Bihar has a shortfall of 71 per cent, while West Bengal, Jharkhand and UP are not far away. Even Kerala and Delhi, who have done the best, will not be able to achieve a 60 per cent target by December.

Is the current scenario optimistic? Not really.

Apparently, about 20 per cent plus have got their first dose, and 5 per cent plus have been fully vaccinated. Surely, at this rate, no one knows when a country of India’s size will ever get ‘fully vaccinated’. And the bitter truth is that less the level of vaccination in the population, the more there are fears of multiple mutations of this killer virus. India, therefore, is as vulnerable as ever.