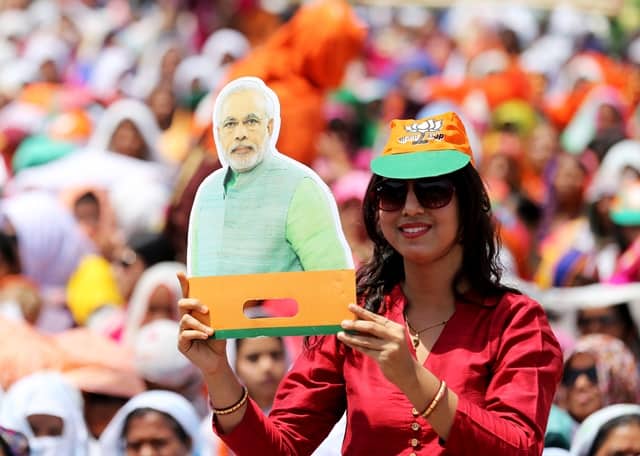 Even before the first vote is cast, and campaigning reaches its crescendo, Modi is probably entering the fray with an advantage.

A few days ago, one of India’s most respected and well-known senior TV journalists posted a tweet that was telling. She was reporting from the field in Baghpat in Uttar Pradesh and her tweet said: “A commonly described refrain about @narendramodi–not Pulwama, Balakot, or PM Kisan–is “he works really hard and he isn’t gaining anything for himself” – talking to voters in Baghpat. #OnTheRoad2019”. India’s national elections are less than a fortnight away and, increasingly, the views gleaned from the ground seem to point to a public mood that favours re-electing Mr Narendra Modi, his party, the Bharatiya Janata Party, and its several allies.

Dipstick surveys of the sort that journalists often resort to—talking to local cab drivers or roadside tea stall owners is one of the commonest tactics they use—are neither rigorous nor scientific ways of gauging the pre-election mood of an electorate, at least not of one that is as diverse, complex, and confounding as that of India’s. Yet, as we head for this year’s national elections (they begin on April 11 and go on for seven phases), what people outside the high-decibel chatter on social media platforms are saying bears consideration. Mr Modi and his government appear to elicit greater levels of faith among large swathes of India’s population. So, are they headed towards an election with a definite edge over their opponents such as the Congress party or the motley crew of other parties that have been trying to forge a grand alliance to oust the BJP-led government?

When it comes to campaigning for votes Mr Modi has a clear edge over his rivals. Whatever critics say, he’s probably the best orator in Indian politics today. His speeches may be peppered with “politically incorrect” statements (recently, while speaking to students at an IIT, he appeared to be mocking Congress president Rahul Gandhi as someone suffering from dyslexia), or repetitive homilies about how his government had delivered on what it had promised, or even inaccurate accounts of things such as India’s growth, employment generation, and poverty alleviation during his regime, but his oratorical skills are clearly a huge draw among ordinary Indians who usually come out in strength to listen to him at his numerous rallies. The average Indian sees Mr Modi as a strong, hardworking leader who is honest and selfless.

A gifted speaker, Mr Modi’s rally speeches are designed to touch the heart of his audiences. He speaks to them in simple language, although he has a penchant for coining acronyms, and is usually able to create a feeling of respect, admiration and trust among them. Through his tenure, he has leveraged this talent. His monthly radio talk, Mann ki Baat, which partly crowd sources its themes, and has a potential to reach 90% of Indians, is a huge hit. He has nearly 47 million followers on Twitter and has posted more than 22,800 tweets (Donald Trump has 59.5 million and 41,000 tweets) and even though he’s faced flak for not holding a single press conference since he became Prime Minister in 2014, his alternative way of keeping in contact with people seems to have borne fruit. No one except the media complains about the PM not holding pressers.

In several polls, confidence trackers and other devices of that ilk, Mr Modi continues to be head and shoulders ahead of his rival politicians when it comes to who most people would prefer to see as the leader of their nation. In contrast, the Congress president and Mr Modi’s main rival, Mr Gandhi, is still seen as a work in progress. That may seem amusing because at 48, Mr Gandhi may be a generation younger than Mr Modi, 68, but he’s already a middle-aged man.  Mr Gandhi’s election speeches are also not remarkable. He’s not as good a public speaker. But more importantly, his speeches lack the conviction that Modi’s speeches invariably seem to have. Also, during this election season, other than the announcement of a form of universal basic income for the poorest in India, in his public utterances, there has been little of his vision for a better India.

Mr Gandhi’s party just released its manifesto for the elections, spelling out what it would do if it came to power. It was no surprise that it promised a thorough investigation into the Modi government’s deal to buy Rafale fighter jets from France—a deal that the Congress and others believe smacks of corruption. But its main focus was on creating jobs; alleviating distress among India’s farmers; and, naturally, the minimum income scheme that Mr Gandhi had announced earlier, and in which Rs 72,000 a year would be paid to the poorest 20% of households.

The BJP is yet to release its manifesto—before the last election in 2014, it had done so only very late into the campaigning period. But it would be a real surprise if that document didn’t prioritise the exact same things that the Congress’s one has. The Modi government has been perceived to be tardy on issues such as employment generation and well-being of farmers. Political prudence would dictate that these issues would feature high up on the BJP’s manifesto as well. India’s problems—particularly on the economic development front are complex and so large that no aspirant for New Delhi’s seat of power can ignore them, least of all an aspirant wanting to be re-elected.

The outcome of India’s elections—they are complex and involve various permutations and factors that influence voters’ choices—are never predictable. The size and scale of itself is massive: 820 million voters; 930,000 polling stations; 1.4 million electronic voting machines; 11 million security personnel overseeing polling over seven phases. But so is the unpredictability of the voting trends. How a party fares in populous states such as Uttar Pradesh, Andhra Pradesh (now bifurcated into two separate states), and Maharashtra could be the determinant of whether it gets a shy at forming the government. Moreover, votes are cast on the basis of many other factors that go beyond economics and the personalities of leaders. Caste and religion create blocs of voters; and India’s population of 172 million Muslims who are its largest minority have not exactly been happy in the past five years under a government led by a party whose policies have always had Hindu nationalism at its core. Recently, at one of his rallies, while upbraiding the Congress for creating the term “Hindu terror”, Mr Modi implied Mr Gandhi was contesting from an additional Muslim-dominated constituency because he was afraid of losing from his regular constituency, UP’s Amethi. In 2014, when the BJP and its allies won 336 seats out of 543 in India’s lower house of Parliament, few psephologists had been able to predict that it would be such an overwhelming win. One reason why India’s pre-poll surveys often go horribly wrong is because of the diversity and sheer size of the electorate—huge numbers of voters; and a vastly diverse population, both in terms of demographics and psychographics. In a country of 1.3 billion, sometimes the biggest sample size you can manage to poll is quite often just not big enough. Yet, even before the first vote is cast, and election campaigning reaches its crescendo, it may not be wrong to say that Mr Modi is probably entering the fray with an advantage.