Insinuations about the Nehru-Gandhi family’s ‘Muslim’ past, made by their cultural/political foes, are old. But for the first time, during a very toxic campaign for Delhi Assembly elections, Firoze Gandhi was called “Firoze Khan”. None from the Congress party that the family heads, objected, ostensibly out of fear that the issue would get communal hue. Congress is politically frozen. It needs a new leader.

It’s delicate. Criticizing Congress leaders/cadres for this is difficult when Nehru-bashing even by union ministers is the in-thing and when lawmakers question Mahatma Gandhi’s role in the freedom movement. But all this, besides weakening of secular ethos for which India is known, underscores the decline that the party has suffered over the recent years.

Assessing this decline is also not easy, indeed, difficult to define, when the party still has three scores of Members in Parliament (out of 800-plus) and rules, singly or jointly, in major states like Punjab, Rajasthan, Madhya Pradesh, Chhattisgarh and Maharashtra.

The other, more important, aspect of this political reality is declining vote share, of its leaders and activists, young and old, jumping off the ship and turning vocal critics, overnight as it were, to get accepted in their new parties. But most important, over a long period now, is the low reached in the vote-catching influence of its top leadership.

More glaring are the inertia within and directionless approach, of losing states – Goa, Arunachal Pradesh, Haryana – despite numbers and being outsmarted by rivals. The worst is the public ridicule to which the party and its leaders are subjected to in social media-driven information explosion and a low-level public discourse.

The latest instance of all these is the Delhi polls that saw the Congress drawing a blank, yet again, cementing its vote-share loss during the parliamentary polls in 2014 and 2019. Sixty-three of its 66 candidates lost deposits, after ruling for 15 years straight in this small but politically important national capital.

Newbie Aam Aadmi Party (AAP) has almost entirely hijacked the Congress’ support base. Elsewhere, across the North – Uttar Pradesh, Bihar, West Bengal, much of the North-East and the South – it has long ago lost out to regional parties.

Placed in similar dire stress after losing in 2004 and 2009, the Bharatiya Janata Party (BJP) recovered. It held on to states where it wielded power with strong chief ministers and eventually, found its national leader and vote-getter in Narendra Modi. Mounting this process was its larger cultural/political family. The Congress does not have this, even as its mass base is eroding.

India’s oldest party is stuck with the Gandhis, who are neither able to deliver, nor able/willing to give up. A ‘temporary’ president, Sonia Gandhi, had headed it the longest, for 19 years, earlier. She is known to be ailing and keen to retire. Her reticent son Rahul, resigned after a disastrous performance last summer and asked for selecting a “non-Gandhi” to lead. But nearly five decades of the family rule has totally benumbed the party, at all levels, into not even looking for a new leader or a set of people who can provide coherent, collective leadership. For want of a better word, the party is in coma.

The Delhi debacle and prospects of Rahul returning to lead, likely next month, if only to relieve his mother, have brought the prolonged crisis to the fore. Reports indicate a silent demand, a muffled one so far, for a “non-Gandhi.”

Reports also indicate deep discord and disarray within the family. Sonia wants Rahul to return, but does not seem to trust his choice of aides and his decisions – and not without reason. The “old guard” around her clashes with the ‘new’ one close to Rahul. The difference between the two is that the ‘old’ is really old and now rootless, while the ‘new’, by and large of young techies and managers, never struck roots.

Much was made of Priyanka and her resemblance to grandma Indira Gandhi. But repeated electoral outcomes show that the present-day voter’s memory is too short for that. If Priyanka is the alternative to Rahul, she is also the sitting duck for a government that is vigorously pursuing cases against husband Robert Wadra.

Rahul tried, with limited success last year, to by-pass his 24X7 ridicule. His ill-advised choice of campaign issues and gaffe-prone performance went against him and the party.

To be fair, the Gandhis are a decent lot. Rajiv, the last Gandhi to rule was extremely decent, too. But that is not enough in politics. They are expected to deliver each time, often as the lone rangers. Absence or internal elections leaves them with leaders, but no workers.

The Congress’ shrinking cadres need leader(s) who actually perform full-time and not during the elections; who can rub shoulders, literally, with the crowds. Past sacrifices, charisma and token reach-outs with photo-ops, without support on the ground have not worked, and will not in future.

This is not the Congress of the Mahatma and Nehru who were relatively tolerant of dissent. Indira ended it, appointing leaders from the top and turning the party into a family estate. Although the Gandhi family was not active from 1991 to 1998, Narasimha Rao could not be without its overcast shadows. Ditto Manmohan Singh who had no base, no say in the party.  She lacks understanding of Indian social and psychological traditions. She must be credited, though, for forging alliances that earned the Congress power in 2004.

When Sonia entered politics in 1998, some left, dubbing her a ‘foreigner’. Today, some Congressmen clamour for the return of one: Sharad Pawar. Conventional wisdom still places Congress as the Opposition’s rallying point – only if it strives to organize and act.

The party is unsure of its ideological direction. Adopting “Soft Hindutva” has failed. The task of countering the BJP’s majoritarian agenda is extremely daunting when secularism means being pro-Muslim and thus, “anti-national.”

Generational changes have been most painful in Congress whose Treasurer is 92. None retires in India, anyway, irrespective of age and health.

But naming names is futile till the party that is wedded to only one name acts. There is still time, last chance, perhaps, to stem the rot. 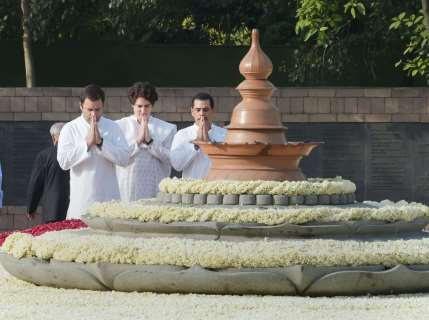