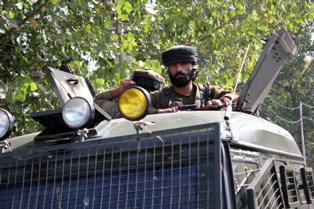 — ?SINGH ????????? (@HatindersinghR) November 7, 2017 According to Inspector General of Police Muneer Khan, the highlight of the operation was the recovery of a US-made M4 carbine from the eliminated militants. Khan said the M4 is a weapon used by US and NATO forces as well as Pakistan’s Special Forces. The other recovered weapons included an AK-74 and a pistol, plus ammunition.

Jaish-e-Muhammad has owned #TalhaRasheed . We will ask them to collect the body because they owned it IGP #Kashmir pic.twitter.com/bYmVpRaOrt

Sham Sunder of the 44 Rashtriya Rifles (RR) was killed in the gun battle in Aglar village with the militants who belonged “to the same group” who attacked a police check-post in Rajpora on Saturday. Two other soldiers and a civilian were also injured in the operation that has now ended, police said. Following intelligence inputs about the presence of militants, troops of the 44 RR, Special Operations Group (SOG) of state police and the Central Reserve Police Force (CRPF) had surrounded the village on Monday evening. As the cordon was being tightened, hiding militants fired at the joint team of security forces. The gunfight started late on Monday evening. The civilian injured is Showkat Ahmad, who along with other protesters had clashed with the security forces to disrupt the terror operation. Internet services have been suspended in Pulwama district to check the spread of rumours. (with IANS) (Views expressed in tweets do not reflect Lokmarg policy) // ]]>