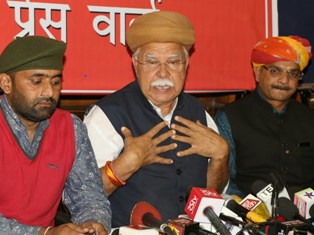 Gujarat Chief Minister Vijay Rupani on Wednesday declared that the his government would not allow release of Sanjay Leela Bhansali’s “Padmavati” in the poll-bound state. “There is a lot of sensitivity in Kshatriya and Rajput communities with regards to certain depiction of history. We respect their feelings and with elections on the anvil, the state government does not want any controversy. Besides that the law and order is also our responsibility, so we have decided that we will not allow release of movie ‘Padmavati’ in Gujarat,” he said.

The Government of Gujarat will not allow #Padmavati – a movie hurting sentiments of Rajputs – to get released in the State. We can’t allow our history to be distorted. We believe in freedom of speech & expression but any foul play with our great culture is not tolerated.

Rupani also said that the ban was not only limited to the state assembly polls which will be held in December “but till the controversies subside”. Asked by media whether he had seen the controversial movie or not before taking such a decision, he said that it was not required. “I have met several people who have expressed anguish and anger against the movie. It has hurt their sentiments bad and we respect their point of view.” Asked whether this announcement by the Chief Minister of banning the film amounted to violation of the model code of conduct which is in effect in the state, state chief electoral officer B.B. Swain said: “I don’t know. I will have to check the matter and decide.” At an earlier press conference here, Kalvi said he had already garnered the support of Chief Ministers of four states. “I will make it from four to 14 till the next date is decided. I am meeting three more Chief Ministers in the next two days. This film will not run,” he said. He said his appeal to Modi to “intervene” in the controversy was merely via the media. Do they plan to make a written appeal to Modi? “We will make a written appeal to PM if there’s a need. I haven’t written any appeal to any Chief Minister or the Prime Minister…. I am going to Maharashtra… They will ban it, I am confident,” Kalvi told IANS. Karni Sena has been up in arms against Bhansali since he began shooting the film and had even assaulted him on the sets of his film in Jaipur last year over fears that the movie showcases objectionable scenes. Now, it is calling for a ban. Will the Karni Sena go to the Supreme Court? Kalvi said: “There’s no need. We are in the people’s court and it has a lot of strength.” But the apex court has already rejected two pleas regarding the stalling of the film. “Those were pleas by over-excited people who have no evidence,” Kalvi said. Calling Bhansali a “repeat offender”, Kalvi said: “He does opposite of what he says and never does what he says. Why did they leave the section of genre in the censor board application form blank? He knew whether he writes historical or fiction, he will land in trouble.”


As Padmavati becomes a burning controversy, people are asking why the legendary @SrBachchan, most versatile @aamir_khan & most popular @iamsrk have no comments..& how come our I&B Minister or our most popular Hon’ble PM (according to PEW) are maintaining stoic silence. High time!

The real question should be,why is Allauddin khilji being shown as a barbarian in the movie #Padmavati when in reality he was far more sophisticated & cultured than the rajputs who burned there widows in the name of SATI &were cowards who lost & ran leaving there wifes &daughters

Modi govt&it’s lapdog channels are masters of distraction.Each time a new distraction is trotted out to bury inconvenient news. Padmavati row to distract from shutting down Parliament& #KisanMuktiSansad.Now chaiwala meme to distract from #CBIJudgeMurdered https://t.co/WEy92JYYaY

You are right, if India took corruption cases & crimes against women seriously, we wouldn’t be focusing on #Padmavati but on you & the tragic fate of your “55 Crore girl friend” who sadly agreed to become your wife https://t.co/CKOfRTzDaM

Ban on Padmavati movie across various states reinstates the power of the honored traditions and culture of India. I thank you all for coming together to save our culture ,heritage and opulent history.#Padmavati

Those who want @ArvindKejriwal to speak on #Padmavati Controversy must understand that this man is hated by Literally every media house , if he says something it will be distorted so much that he will become a national Villian once again. It’s actually nice that he is silent!

At this point, the producers of Padmavati should do the right thing, and leak the movie.

I am daughter of Rajasthan, who respects the Noble Sacrifice of Rani Padmavati. All of Rajasthan will fight for her honour.

Thank You for your graceful apology ? 1000s of movies release and no one objects. #Padmavati has people sentiments, emotions , respect involved & is a complex issue, hopefully will be resolved amicably. https://t.co/3iY83Xtu0N