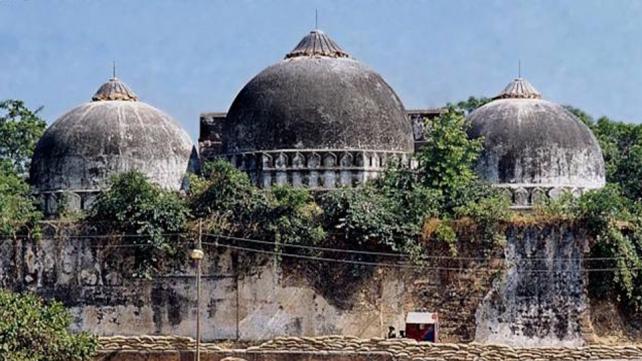 In a new twist to the Ram Janmabhoomi dispute, the Sunni Waqf Board on Tuesday urged the Supreme Court to defer hearing in the Ayodhya title suit till July 2019 when the next Lok Sabha elections will be over, but the top court brushed aside the plea and fixed February 8, 2018 for commencing final hearing in the case.

As the bench of Chief Justice Dipak Misra, Justice Ashok Bhushan and Justice S. Abdul Nazeer began hearing the matter on Tuesday, senior counsel Kapil Sibal, Rajiv Dhavan and Dushyant Dave urged the court not to go ahead with the hearing which would have repercussions for the country’s polity.

Bad day in SC for Congi. First tried to postpone to 7/2019. Rejected. Then tried to send it a Const Bench. Refused. Arguments now from 8/2

“The court should not hear the matter which has repercussions on the polity of the country,” Sibal, who appeared for the Waqf Board, urged the court to have the hearing in July 2019, suggesting that it would have a bearing on 2019 general elections.

Kapil Sibal pleads for postponement of Ram Mandir verdict till 2019 LS elections, saying it will have huge ramifications in the polity of the country. Even in the court, Congress is playing with the religious sentiments of Hindus for the sake of pleasing its vote bank. #Ayodhya

Senior counsel Harish Salve countered Sibal. He told the bench that whatever the repercussion outside the court was not the court’s lookout. As far as the court was concerned, it was “just a case” like any other case before it, he stressed. Urging the bench to commence hearings in December itself, Salve took exception that “it is being presumed which way the verdict will go… You have it (hearing) in December”. Salve appeared for one of the petitioners seeking an early hearing on the petitions challenging the 2010 Allahabad High Court verdict, which was stayed by the top court on May 9, 2011, which had described the High Court verdict that had divided the disputed Babri Masjid site between the Nirmohi Akhara, Lord Ram deity and the Sunni Waqf Board as “strange and surprising”.

The hypocrite @INCIndia provides best legal brains available with them to the Waqf Board against Ram Lulla. @OfficeOfRG doesn’t take a categorical stand in 15 years that he supports a #RamTemple at Ayodhya, but visits 25 temples during #GujaratElection2017

Referring to a statement by a Bharatiya Janata Party (BJP) leader that the matter would be listed and decided in three months, Sibal said that “justice should not only be done but also appear to have been done”. Dave, also seeking that the hearing takes place after the 2019 elections, wondered what was the “hurry”. He told the bench that the government was keen that the Supreme Court heard the appeals early because Ram temple was part of the ruling party’s manifesto. He urged the court not to fall into their trap, a point also reiterated by Sibal.

Latching on to Kapil Sibal’s statement in the Supreme Court for deferring hearing in the Ramjanambhoomi dispute till after the 2019 Lok Sabha elections, BJP President Amit Shah on Tuesday asked Rahul Gandhi to clear the Congress stand on the Ram temple issue. He accused the Congress of having “double standards” on the contentious issue and said the Bharatiya Janata Party (BJP) on the other hand wanted an end to the matter as soon as possible. “I appeal to the future Congress President — please clear your stand on the issue,” he said. “The Congress puts up (Congress leader and eminent lawyer) Sibal every time it wants to take a different stand — be it the 2G scam when Sibal came up with ‘zero loss’ theory or the reservation issue in Gujarat when he said reservation beyond 50 per cent is possible.” He alleged that the Congress did not want the issue of the proposed Ram temple at Ayodhya in Uttar Pradesh to be resolved soon. “On the one hand, temples are being visited (by Rahul Gandhi) ahead of elections. On the other hand, they are trying to delay hearing of the Ramjanmabhoomi case (in the Supreme Court). The Congress has double standards on the issue. They should clarify their stand,” Shah said. According to Dave, the issue tears into the secular, democratic fabric of the country. He joined senior counsel Rajeev Dhavan in urging the bench that the matter should be heard by a five-judge constitution bench. Sibal also raised the issue of paucity of time in preparing the case that involves relying on more than 19,000 documents, a position also supported by Dhavan, who said the hearing would involve making their submissions and also “honestly” responding to the queries from the bench. Telling the bench that hearing would take long and would not be completed till October next year when Chief Justice Misra retires, Dhavan along with Sibal pushed for deferring the hearing till July 2019. As Justice Bhushan did not appreciate the submission that hearing would not be completed within the tenure of the Chief Justice Misra, Dhavan regretted his submission. Having ordered that the hearing would commence on February 8, the court on Tuesday directed its registry to inform the bench by mid-January whether all the requirements of filing of pleading and documents had been completed for appropriate orders on the administrative side. After rejecting the submission on postponing the hearing till 2019, including hearing by a constitution bench, the court asked senior counsel C.S. Vaidyanathan, appearing for deity Ram Lala, to give introduction of the dispute before the court.


Justice can be served only if Babri Masjid is rebuilt at the same place again and made open for prayers. Also the perpetrators responsible for its demolition be punished. Charity and philanthropic work can happen in the rest of India. Rebuild the Babri Masjid ! #Ayodhya pic.twitter.com/Wecytx2OkE

#Ayodhya Kapil Sibal Wants Supreme Court To Wait Till 2019 Elections Before Hearing Ram Mandir Issue as #LutyensAyodhyaFormula is not to let BJP Benefit from the verdict means Congress is sure that the verdict will be in fvr of the Mandir #WakeUpHindu support @Swamy39 & Salveji pic.twitter.com/PkH6pOWM0Z

India is a country where people are more interested in religious confrontation rather than genuine progress of the country. #Shame #Ayodhya

IF #Ayodhya was the birthplace of ShriRam then instead of Ram Mandir i want a huge children’s hospital with all facilities to be built there .At least in the name of Ram no child will die because of lack of oxygen. P.S. Name every male child born there Ram and female child Sita