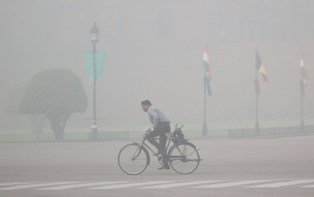 By S.N. Tripathi An apple a day keeps the doctor away is passe. Yet, it applies so well to the health of our environment, especially the atmosphere. We keep our body healthy so that it can efficiently fight diseases. A weak body will need heavy medication to fight a disease and, in the process, may develop side-effects. This general principle applies to the atmosphere too. Relatively clean air with the concentration of ambient pollutants under control is in a better position to deal with occasional large emissions. Large forest fires, volcanic eruptions and dust-storms are unexpected incidents that may momentarily cause air pollution levels to spike above permissible levels. After such events, a healthy environment would be easily able to return to a cleaner state. In Delhi, however, after over 10 days of “severe”-level air quality, it improved to a “very poor” level during the December scare. This is a sign of an unhealthy environment that takes time to recover to its original state, though even that state may not be very healthy at all. This is a cause of great concern and needs immediate public and policy attention. The Indo-Gangetic Plains (IGP) have recorded unprecedented levels of air pollution exceeding all permissible limits almost all year long. The situation is such that, just like an unhealthy body, its immune system fails to recuperate from external periodic events such as crop burning in Punjab and Haryana, excessive vehicular pollution, or construction dust. This is because even in the normal state, year round, the pollution caused by poorly-regulated industries as well as coal-fired power plants with obsolete emission control norms exceeds the limits that the environment can handle. The lack of a fine self-correcting balance mechanism creates a fragile situation ready to explode. Sadly, while Delhi has the “privilege” of great media attention, other cities across the plains are worse off. Lucknow has been recorded as the most polluted city in India, while PM2.5 values of Kanpur, Moradabad and even Ghaziabad are not far behind. There is, in fact, evidence that most Indian cities with populations of over 100,000 have pollution levels well exceeding WHO limits. One way to ascertain atmospheric pollution levels is to measure the rate at which dust particles block sunlight. Research based on the ISRO network shows that since 1995, pollution in the atmosphere has been increasing across India, with a much steeper rise in the IGP. What are the major reasons behind this and what could be the possible solution to this gigantic problem, which is now the largest killer globally as estimated by the Lancet Commission? It is worth remembering that even with all sincere efforts, it will take years, if not decades, to secure clean and breathable air in our cities. Pollution in water bodies such as a river is much better understood compared to atmospheric pollution. The overall size of a water body is only a fraction of the area of the land. For example, the Ganga and the Yamuna put together will only be a fraction of the area of the IGP. Even with a simpler system with far greater understanding we are struggling to keep our rivers clean. The atmosphere has active and complex interactions between gases, particulate and liquid droplets, especially during monsoon and winter-time fog. The problem is further compounded by transformation of gases into particulate matter, giving rise to secondary formations. Data shows that during winter, up to 50-60 per cent of total PM2.5 is secondary in nature (forming in the atmosphere rather than released at source) because of conversion of gases such as sulphur dioxide, nitrogen dioxide, volatile organic carbon (VOCs) and poly aromatic hydrocarbon (PAHs) into particles. It is a highly challenging task to trace the sources of these gases. Existing sampling methods are not capable of distinguishing between primary and secondary sources. Hence, the present source-apportionment studies that employ these techniques fail to provide the comprehensive understanding that is required to solve this problem. The reported sources are based on particles collected on filters followed by their chemical speciation. Unfortunately, these analyses can only achieve speciation at most by 50 per cent (lack of mass closure), limiting our ability to properly understand the sources. This is also precisely the reason that the problem of air pollution needs to be looked at a regional scale as gases emitted elsewhere can contribute to PM at a different place, thus limiting the overall efficacy of source mitigation efforts solely driven by local considerations. The regional nature of the problem requires inter-state cooperation. This can be achieved by creating a single empowered agency with scientific, technological and legal arms. There is a valley-like effect in the IGP — the tall Himalayas in the north not allowing air masses to rise and disperse, as is the case in other parts of the country. Inversion conditions during winter further reduce the dispersion capacity of the lower part of the atmosphere, leading to accumulation near the surface. Such weather conditions cannot be avoided. One way to deal with these is to adopt stricter emission laws for the IGP, with rigorous enforcement backed up by severe penalties. The monitoring networks can be scaled up using low-cost, automated sensors that have been giving promising results. Experience of other countries can be used to combat this problem. (S.N. Tripathi, a professor at IIT-Kanpur, has been closely studying air quality, climate and health over the years. The views expressed are personal. He can be contacted at snt@iitk.ac.in) (IANS)]]>