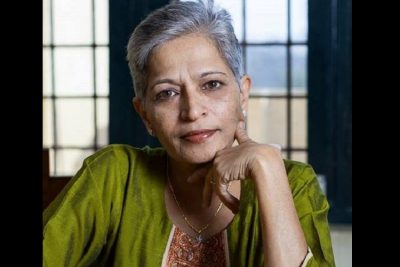 blog.  India is the land which has taken pride in reading the verses of Natya Shastra that speaks of specific commitment to free speech. The noted author Salman Rushdie,  who had faced fatwa from Muslim dominated nations over his controversial novel The Satanic Verses, had made references to Natya Shastra at a public event. The scholar, who has widely read Hinduism highlighted how most ancient Indian texts have an explicit and extreme defence of freedom of expressions as you can find anywhere in the world. Given this rich history of the diversity of ideas and critics, it is ironic and a shame that India today is facing threat from the Hindu extremist camps, which should most be defending the greatness of ancient Hindu virtues. Although the investigating teams have not identified the killers of Gauri Lankesh, and there is no evidence pointing to the involvement of any group on the face of it, but the fact cannot be ignored that Gauri and the Hindu brigade never saw eye-to-eye. She had faced defamation charges for allegedly maligning BJP leaders. That does not mean the BJP is involved in her murder but the silence of BJP only adds to rumours and failure to protect journalists like Gauri. Gauri’s end was no different to rationalist Narendra Dabholkar, campaigner for the anti-superstition bill, his associate and communist leader Govind Pansare, MM Kalburgi, who campaigned against idol worship and Brahmanical rituals. These people had to literally bite the bullet as they questioned and irked modern day religious extremists and self-styled vigilantes of traditions which they little understand. It is the time that the custodians of Hindutva look back and imbibe the crux of Hindu philosophy which is based on the ideals of tolerance. A reading of the scriptures confirms that Hindu Gods gave sufficient importance to a diversity of ideologies. The difference of opinion was welcomed even on religion and Shastra, and nowhere in the Hindu scriptures is there any mention of killing the opposing voices. Most Hindu scholars and saints who truly followed these Shastras, have promoted and imbibed peace and extreme level of tolerance. Fatwa verdict has never been part of Hinduism as the core basis of the religion is non-violence and the dictum of ‘live and let live’ which has been an intrinsic rule. However, with a sudden rush in hyper political dramas and brainwashing, the scenario has changed dramatically. Not only has this interfered with the social fabric of society, but has also unleashed the politicisation of religion in every nook and corner. It wasn’t too long ago when we looked with dismay at countries like Saudi Arabia, Iran, Afghanistan, Bangladesh where free speech and free thoughts were met with death threats. Now India stands in the same category. Most Indians took pride in the fact that unlike neighbouring Bangladesh and Pakistan where more than a dozen secular bloggers, activists and filmmakers were hacked to death by Islamic extremists, our society was liberal enough to allow everyone to speak their minds. We Indians thanked our stars for not being born in Saudi Arabia, where the likes of Raif Badawi, activist and founder of website Free Saudi Liberals were put in the jail and punished with flogging for apostasy. It’s shameful that we have put ourselves in the same league of nations that boast extreme religious intolerance. In the blind race to make India a ‘Hindu nation’, we have forgotten what Hindu scriptures preached.  Those who espouse Hindutva may need to go back to read the Shastras. // ]]>