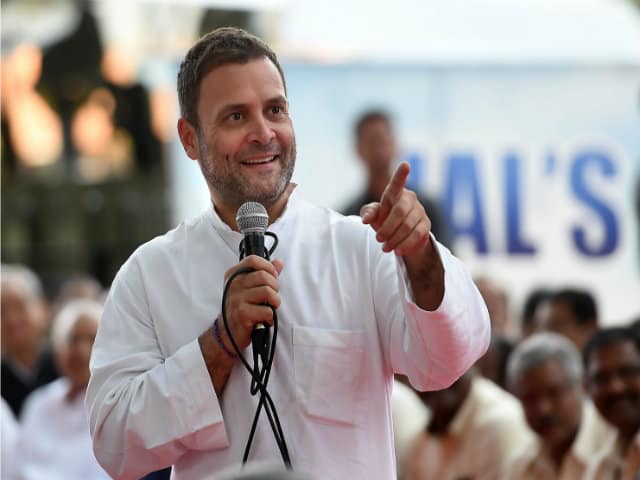 Escalating his campaign against the Modi government over the Rafale deal, Congress president Rahul Gandhi on Saturday accused it of destroying the “strategic asset” state-run aerospace company HAL and told its employees that “Rafale is your right.” Giving a new twist to his high-pitch Rafale campaign, Gandhi sought to reach out to present and former HAL employees, alleging that “temples of modern India are being attacked and destroyed; we cannot allow it to be done.” “Rafale is your right; you are a 78-year-old company. You have the experience to build the plane,” the Congress president said at the event held at Minsk Square near the HAL headquarters, after hearing the former and present employees. He said it was “completely ridiculous” for the government to say that HAL did not have the required experience. Gandhi told the gathering that he understood “deeply” that they were pained and hurt and “this is as important to me as any corruption or anything that has happened.” “People who have given their lives, people who have stood by this country are feeling emotionally upset because they have been insulted. I know that the government is not going to apologise, but on their behalf I apologise to you, even though I have nothing to do with it. I understand that that you are hurt and I want to stand with you in your discomfort,” he said. The grievance of most of the employees who spoke was that HAL had the capability to make Rafale, but an attempt was being made to “dismantle” the defence PSU and the workers feel “hurt and let down”. Gandhi said the work done by HAL for the country was tremendous and the country owed a debt to it for “protecting us” and creating a scientific vision. HAL is a strategic asset in aerospace, not an ordinary or regular company, he said. Speaking to reporters after the event,Gandhi said defence minister Nirmala Sitharaman talked about lack of experience of HAL, but had said anything about the lack of experience of Anil Ambani, “who has been never built a plane in his life.” “HAL has no debt, he has Rs 45,000 crore of debt. HAL has been working for 78 years. His company has been working for 12 days. So she has no comment about the person who got the contract. She has to comment about HAL’s experience,” he said. Gandhi demanded to know why the order was being taken away from HAL when it had all the experience. “Why hasn’t the work being given to them? Why is HAL being destroyed by Anil Ambani… that is the question,” he asked. He said the employees felt hurt over the fact that their hard work over the last 78 years, their patriotism, has been insulted and questioned by the government through the defence minister. “So the first thing is that they expect an apology from the defence minister for insulting HAL. We understand that the defence minister is not going to apologise,” he said. On alleged corruption, he said HAL was one of the “modern temples” of India and it was being destroyed “because of corruption that Narendra Modi is doing to help Anil Ambani”. “Every single person here made it very clear that they have the experience. They have the understanding and Mr Anil Ambani does not have the understanding,” he said, referring to the HAL interaction. “We are here to defend the people who are defending the nation. From the government, we have to defend HAL,” he said. Ahead of Gandhi’s interaction, HAL had issued an internal communication to its employees on Friday, as a reminder on their obligations on conduct and discipline in the interest of the company. The HAL employees union said an interaction was sought with the employees, but they decided not take part as the union was apolitical. “We got a communication from the Congress office,but we can’t take sides for a political party, being government employees. Our union is an independent union,we are not affiliated to any political party,” the union’s general secretary Suryadevara Chandra Shekhar said. Karnataka state Congress chief Dinesh Gundu Rao said the discussion was not organised by Congress, but by “some people”, including some ex-employees, who are “pained” by the government’s attempts to “ruin HAL’s name”. Congress leaders Mallikarjun Kharge, M Veerappa Moily, Deputy Chief Minister G Parameshwara , former chief minister Siddaramaiah and Congress spokesman Jaipal Reddy were present at the interaction. Gandhi’s interaction is part of his onslaught against the Modi government over the Rafale deal in which he has alleged that HAL was overlooked in the offsets contracts with French aerospace company Dassault Aviation, preferring Anil Ambani’s company. Congress, which has been accusing the government of benefiting Reliance Defence of Anil Ambani from the deal, has also been demanding answers on why the state-run aerospace major HAL was not involved in the deal as finalised during the UPA regime. The party had been accusing Prime Minister Narendra Modi of snatching jobs of people of Karnataka by taking away the contract from HAL. Gandhi had been saying that had HAL been selected in place of Reliance Defence, it could have generated employment to scores of unemployed youth in the state. However, the BJP and Reliance Defence have dismissed all the allegations as false. Modi had announced the procurement of 36 Rafale fighters after holding talks with then French President Francois Hollande on April 10, 2015, in Paris.