As political parties in India get ready for the mother-of-all electoral battles, Priyanka Gandhi Vadra has emerged as the X-factor in the forthcoming contest.

Always seen as a natural and instinctive politician unlike her brother Congress president Rahul Gandhi, Congress workers had been clamouring for years that Priyanka is given a larger role in the party. Her resemblance to her grandmother Indira Gandhi, her easy connect with people and her ability to give speeches in flawless Hindi had convinced the party rank and file that Priyanka indeed possesses the Midas touch to turnaround the  Congress’s fortunes, not just in Uttar Pradesh but across the country.

However, Priyanka is a mystery for the Congress party’s political opponents. The Bharatiya Janata Party was, of course, quick to attack the Congress for promoting dynastic politics when Priyanka was appointed party general secretary. The BJP followed it up by highlighting her husband Robert Vadra’s involvement in dubious land deals. At the same time, the Modi government fast-tracked pending inquiries against Vadra soon after Priyanka’s plunge into politics. Her decision to back her husband and her public declaration that she “stands by her family” baffled the BJP as it did not know how it should react to Priyanka the politician. The Bahujan Samaj Party and the Samajwadi Party, which left the Congress out of their seat-sharing arrangement in Uttar Pradesh, is also wary about the impact Priyanka could make in this electorally-crucial state which sends 80 members to the Lok Sabha.

After its initial acerbic comments on Priyanka, the BJP decided to ignore the new Gandhi in the field. On her part, Priyanka also went underground after making a splash with a roadshow in Lucknow. The Pulwama attack and India’s retaliatory air strike against Pakistan sent the Congress into a tailspin and forced it to put its political activities on a temporary hold. Priyanka’s much-awaited press conference was called off while her tour programme was deferred. With the BJP riding high on its nationalist agenda, it appeared that the euphoria over Priyanka’s political debut had waned.

But now that the Lok Sabha election is round the corner and the country is in the grip of feverish political activity, Priyanka has come out of her shell. This will force the Congress party’s political rivals to reassess Priyanka’s political role.

After keeping a low-profile for the past two months, the new Congress general secretary finally addressed her first public meeting and, that too, in Ahmedabad, Prime Minister Narendra Modi’s home turf. Her brief, understated speech referred to the Modi government’s failure to deliver on its promise to create more jobs while drawing attention to farmers’ woes and the issue of women’s security but without naming the Prime Minister.

At the same time, Priyanka has embarked on her first tour in Uttar Pradesh including a boat ride down the Ganga, from Prayagraj to Varanasi. Modi’s Parliamentary constituency. Undoubtedly, Priyanka is familiar with Uttar Pradesh. She has been managing both Rahul and Sonia Gandhi’s Lok Sabha constituencies, Amethi and Rae Bareli, for several years now. But so far, she confined her activities to the two Nehru-Gandhi bastions. She is now stepping out of this safety zone and in a new role. Her public foray will be monitored closely by her own party and its rivals as each one seeks to assess how people are reacting to her and whether she can live up to her reputation as the Congress party’s trump card.

But Priyanka has a tough job at hand. The Congress has been reduced to a bit player in Uttar Pradesh, having lost its traditional support base of Brahmins, Dalits, and minorities to the BJP and the two regional forces, the Samajwadi Party and the Bahujan Samaj Party. With a defunct party organisation and no social base, Priyanka requires more time to get the Congress back in shape. She was given charge of Eastern Uttar Pradesh barely three months before the election which certainly does not give her sufficient time to build a cadre and carve out a social base for the Congress.

As it is, Priyanka has to contend with a resurgent BJP, which got an impressive 42 percent vote share in the 2014 Lok Sabha election in Eastern Uttar Pradesh, the area under her charge. At the same time, the SP-BSP combine, which brings together the social forces of Dalits, Yadavs, and minorities, also poses a tough challenge as it has an equally strong presence in this region.

The Congress is hoping that Priyanka will succeed in disturbing the BJP’s Brahmin vote and reach out to Dalits and minorities, particularly women, youth and workers. It is a tall order but in the process of rebuilding and strengthening the Congress, the party may end up helping the BJP as her outreach has the potential of dividing the anti-BJP vote. It is unlikely that Priyanka’s presence will work instant miracles.

The Congress rank and file will possibly have to wait till the 2022 assembly election to find out if Priyanka has what it takes to pull the party out of oblivion. After all, Rahul Gandhi did say that Priyanka is here for a long haul. 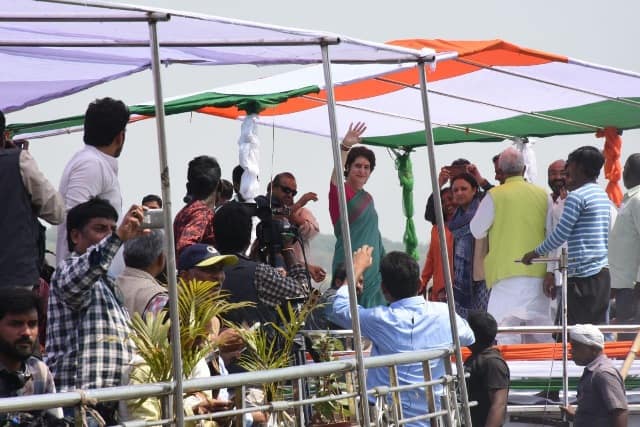 “Ganga maiyaa will give us blessings. She is very generous,” Priyanka said while talking to reporters at the start of the yatra.

She started the first day of Ganga Yatra by offering prayers at Bade Hanuman ji temple followed by a prayer at Triveni Sangam. She will be stopping at Dumdama ghat, Sirsa ghat, Lakshagriha ghat and Sitamarhi ghat in Sitamarhi district where she will stay for the night.

Phule who was elected from the Baharaich Lok Sabha constituency in 2014 elections from the BJP, joined Congress on March 2.

“This is an attempt to reach out to the people whom the ruling politicians did not give priority. From today, Priyanka ji will be (interacting) with Kevats, fishermen and common masses during the three-day ‘Ganga Yatra’ from Sangam to Kashi. This is not a not one-sided ‘Mann ki Baat’ but real dialogue with the people,” UP Congress Committee (UPCC) president Raj Babbar tweeted.

Priyanka’s tour will focus on Sanchi Baat Priyanka ke Saath in which she will talk to people during her 140 kms long travel on a steamer boat to Assi Ghat in Varanasi.

Speaking on the schedule of Priyanka’s campaign, senior Congress leader Pramod Tiwari said, “She will meet the poor communities living on both sides of the river bank like fishermen, farmers, Kevats. Her first-night halt will be at Sitamarhi, on the second day she will visit Chunar and, the third day, she will reach Assi Ghat in Varanasi.”

Addressing a press conference on Sunday, Babbar said: “We are leaving seven seats vacant for SP, BSP, and RLD. These are Mainpuri, Kannauj, Firozabad and the seats from where Mayawati ji, RLD’s Jayant ji and Ajit Singh will contest the ensuing Lok Sabha election.”

“We have also decided to give two seats to the Apna Dal — Gonda and Pilibhit,” said Babbar, adding that the Congress party would chalk out a plan to work with the Mahan Dal as they have agreed to contest on the Congress symbol.

Babbar also said the Congress party has reached an agreement on seven seats with the Jan Adhikar party (JAP). “Out of those seven, JAP will fight on five and we will fight on two seats,” he said. 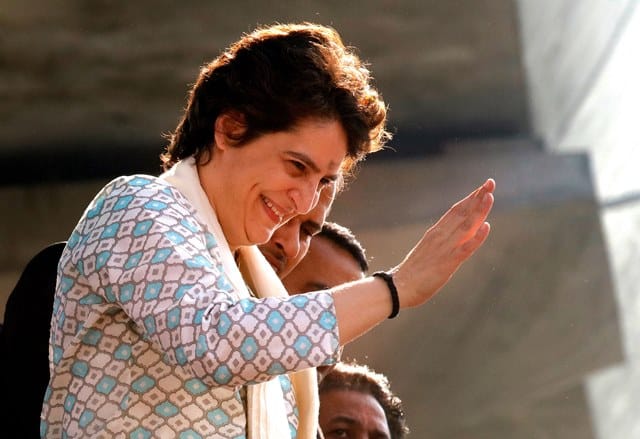 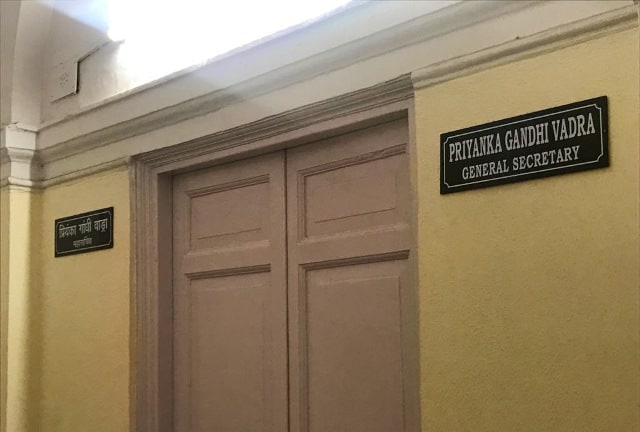