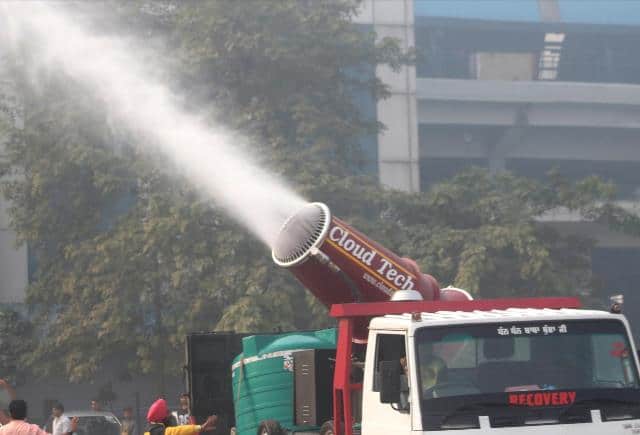 The Delhi government on Monday conducted a trial run of an ‘Anti-Smog Gun’ which sprays atomised water into the atmosphere to control air pollution.

The device, which is connected to a water tank and mounted on a vehicle, could be taken across the city to spray water to settle dust and other suspended particles. The trial done at the Secretariat on Monday evening was reviewed by Deputy Chief Minister Manish Sisodia and Environment Minister Imran Hussain. A government official told IANS that further study will be done before taking any decision on using the device. Sushant Saini, Managing Director of Cloud Tech, the company which manufactured the Anti-Smog Gun, told IANS that it can spray water up to a height of 50 metres and the results were positive as the spray acts like rain and settles dust particles and also PM 2.5. He said that government would conduct another trial on Wednesday (December 20) at Anand Vihar ISBT and pollutants before and after the trial will be measured. Saini said the device would cost around Rs 20 lakh but added that no decision has been taken on whether the company would sell the device or provide its services to the government. (IANS)   // ]]> 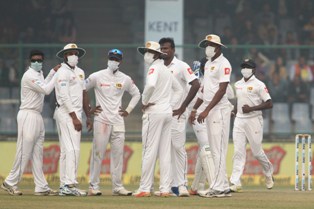 To all the Indians who said Sri Lankans are cowards to wear masks, here are few pics of your own people covering their faces due to Delhi pollution. It’s currently on very unhealthy stage and India must take actions before these innocent people suffer even more. #INDvSL pic.twitter.com/GtO3uWrnwc

— Sakun Sankalana ?? (@Sakun_SD) December 3, 2017 Sri Lanka seamer Suranga Lakmal actually vomited in the fourth Test with India at the Ferozeshah Kotla ground in the capital on Tuesday. Lakmal had bowled only three overs when he was seen vomiting on the field, prompting the physiotherapist to run to the field. After consultation, he went off the ground. Similar complaints were made by the Lankan test players on Sunday while fielding before they left the ground halting the game before lunch time.

Irony of People from Delhi mocking Sri Lankan Cricketers for complaining about Smog and using face masks – the joke is on u. They will return to cleaner air after the series. You will have to stay

The players wore masks while fielding after the lunch session on the second day.

Heard Sehwag say ‘Sri Lanka cricketers are hiding their face behind the mask because their performance and not due to pollution’. Well, some decency must be maintained during commentary I believe and Ranji Trophy matches have been affected by smog earlier #delhipollution #INDvSL

Bizarre pictures from Delhi. Sri Lankan cricketers wearing masks as protection against pollution/smog. Lakmal and Gamage went off the field sick. Play was also suspended for a while. Should they be playing in such conditions? Unprecedented. pic.twitter.com/YExHUNlYSj

The air quality in Delhi remained “very poor” on Tuesday, the System of Air Quality and Weather Forecasting And Research (Safar) recording an overall Air Quality Index (AQI) at 372 for the national capital, labelling it as “very poor”.

On the whole, the Particulate Matter 2.5 (PM 2.5) in the city was also recorded as “very poor”– the fine particles are considered a prominent cause of lung infections and other breathing problems. The level of PM 2.5 was recorded at “very poor” at all ten monitoring stations of Safar across the city and neighbouring areas.

By the way the pollution in Delhi and sorrounding cities isn’t any issue anymore? Or is it just that we are waiting for next diwali season?

Meanwhile, Smog Day was observed. This day is inspired from the first day of the lethal smog that hit London in 1952 and which led to Britain’s Clean Air Act. UNEP said that an “estimated 18,000 people die every day worldwide as a result of air pollution”. “Today is the first international #SmogDay, a moment to remember all of the people who have died prematurely, and avoidably, because of air pollution. #BeatPollution,” the US agency said in a tweet. Growing as an initiative to share the experiences of people living in London and New Delhi, the UNEP points out that each of us will breath about 250 million litres of air in lifetime “no matter where we live and how polluted the air is”. “On the worst day of the Battle of the Somme in 1916 during the First World War, 20,000 British soldiers are thought to have died. Yet, an estimated 18,000 people die every day worldwide as a result of air pollution,” said a report under a UNEP campaign — “clearing the air – a tale of two cities (Delhi and London)”. Alos on Tuesday, London Mayor Sadiq Khan who is currently in Delhi as the Vice Chair on the C40 Cities Climate Leadership Group, on Tuesday announced “a new air quality partnership between London and Bengaluru”. “I’m proud today to announce London and Bengaluru will be leading a new air quality partnership. We hope to work with key cities across the world and in India, including with our good friends here in Delhi,” said Khan, who had earlier this year called for a new Clean Air Act.

Today, @MayorofLondon met children at the Maharaja Agrasain Public School in #Delhi, as they took part in an air quality science class using sensors to measure pollution levels around their school. #Cities4Air ?????????? pic.twitter.com/XWZ1J9e01a

Aiming to control air pollution, Clean Air Act was passed in 1956 by the British parliament after its 1952 smog situation killed 9000 people. In India following the 2016 post Diwali smog situation, the Union Environment Ministry notified Graded Response Action Plan (GRAP) under the Supreme Court appointed Environment Pollution Control Authority. The GRAP applies preventive measures based on the severity of air quality and the “severe and emergency” level measures were for the first time applied this November after the Delhi-NCR faced an environment emergency situation mostly due to emissions from stubble burning in the neighbouring states. (Reproduced tweets do not reflect Lokmarg editorial policy) (IANS) // ]]>