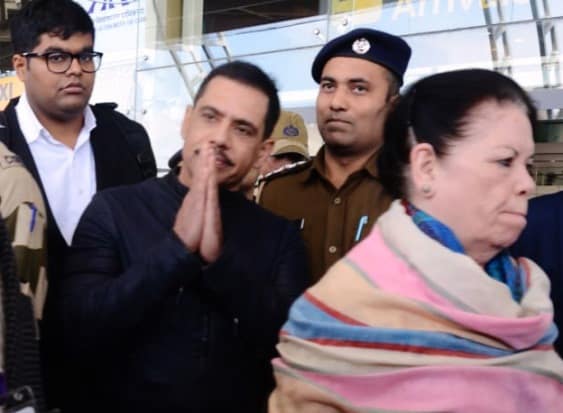 A Special CBI court in New Delhi on Monday granted anticipatory bail to Robert Vadra and his close aide Manoj Arora in the money laundering case, on the condition they cannot leave the country without permission.

Special CBI Judge Arvind Kumar while granting anticipatory bail to the duo directed them to furnish a personal bail bond of Rs. 5 lakh each and surety of like amount.

Furthermore, the court imposed bail conditions on both of them, whereby the duo cannot leave the country without permission. They will have to join the investigation when called upon by the authorities, the court stated.

The court also ordered that the accused persons shall not tamper with evidence or influence witnesses.

In the previous hearing on Thursday, the Enforcement Directorate (ED) had sought custodial interrogation of Vadra in connection with the money laundering case.

ED told a special CBI court that Vadra was harassing the investigative agency and countered his claims of “political witch hunt” and harassment during the hearing of the anticipatory bail pleas of Vadra and his associate.

“Harassment is being caused by Robert Vadra. We say let him come and join the investigation. It is held in camera and he comes for the sessions accompanied by many people including his wife and then he claims that he is ‘hounded and harassed’ to subserve political ends. Vadra is attempting to over-awe the system,” said Special Public Prosecutor (SPP) DP Singh on behalf of the ED.

The court was hearing the anticipatory bail pleas filed by Vadra, the brother-in-law of Congress president Rahul Gandhi, and his aide Manoj Arora who are being probed by the ED in the money laundering case.

ED showed the money trail of the London property in question. “Property was bought by Sanjay Bhandari through his company Syntac. The property was then sold to Vertex for 1.9 million pounds through share purchase. Later, the renovation was carried out with 65 thousand pounds. It was later sold for the same amount despite renovations by CC Thampi through his company Skylight Dubai. The money later returned to Syntac, thus a round trip was established,” SPP Singh told the court.

The agency also showed a mail trail between the accused allegedly discussing the London property. “Vipul Beriwala, Sanjeev Sharma and Jagdish Sharma are main players in the scam and whatever they are talking about clearly shows that the discussion of the real estate deal. They were then in UK itself,” SPP Singh said in the court.