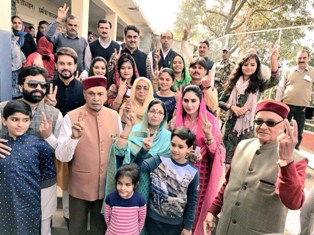 Shyam Saran Negi (born on 1st July 1917 in Kalpa, Himachal Pradesh, who cast the first vote in 1951 general election in India – nation’s first election), after casting his vote at a polling booth, during #HimachalPradeshElections pic.twitter.com/DWHhaLia1G

— PIB India (@PIB_India) November 9, 2017 In the first two hours, the state recorded 13.72 per cent polling but by 4 p.m., nearly 64 per cent of votes were cast. A total of 337 candidates, 19 of them women, are in the fray. There are 112 Independent candidates. The main contest is between the ruling Congress and the Bharatiya Janata Party (BJP). The Congress has projected incumbent Virbhadra Singh, 83, as its Chief Ministerial candidate, while former Chief Minister Prem Kumar Dhumal, 73, is the BJP’s. Both are contesting the elections. Both Singh and Dhumal cast their votes along with family members at their hometowns Rampur and Samirpur respectively. Union Health Minister J.P. Nadda and Congress leader and former Commerce Minister Anand Sharma cast their votes in Bilaspur and Shimla towns. “The BJP has made false promises, run fake campaigns in the state to lure the voters,” Sharma told reporters. After casting his votes, Chief Minister Virbhadra Singh, who is try to get at the helm for the seventh time, said he was confident of the Congress getting a majority. On the other hand, two-time Chief Minister and Leader of Opposition Dhumal said the BJP was aiming to get 60 plus seats this time. Women, who form 19 lakh of the over 50 lakh voters, turned out in strength in the rural areas. The electorate also includes 14 transgenders. The Congress and the BJP have fielded candidates on all 68 seats, while the Bahujan Samaj Party and the Communist Party of India-Marxist have fielded 42 and 14 candidates respectively. Shyam Sharan Negi, 100, the first voter of India, cast his vote for the 15th time in the assembly polls at Kalpa in Kinnaur district. Elections official provided him a vehicle for his transportation to the polling booth from his home. For the first time, the Election Commission used VVPAT machines to ensure secrecy of the votes. The highest polling station in the state was been set up at an elevation of over 15,000 feet at Hikkam in Lahaul and Spiti district. It has 194 electors and saw an 85 per cent turnout despite snow in the evening. In Chamba town, the Election Commission made special arrangements for transporting at least 30 patients from a government hospital to their respective polling booths. The vote count will be held on December 18 along with Gujarat. The Congress had won 36 of the 68 seats in Himachal Pradesh in 2012 with a 42.81 per cent vote share, while the BJP bagged 26 seats with a 38.47 per cent vote share. In the 2012 assembly elections, the poll percentage figure was over 73.5 per cent, the highest since 1977, while it was 68.36 per cent in 2007.

Himachal polling done. My prediction—BJP 50-53. Leave your predictions in the comments and then we’ll tally on result day ? (Keep a gap of 3 between the lower and upper number like I did)

All opinion polls in Himachal give BJP easy victory. History and momentum both with BJP in this one it seems. #BattleForHimachal

The indelible ink is the mark of indelible history of flourishing Himachal under Congress. The days to come will see a new breakthrough in development & welfare, and new benchmarks will be set for other states to emulate. #DevbhoomiWithCongress pic.twitter.com/ys6w5njhsk

This is how BJP is campaigning in Himachal Pradesh. “Gudia” was a teenager who was raped & murdered a few months ago. #Shame, @DhumalHP? ? pic.twitter.com/njx9kUSsOF